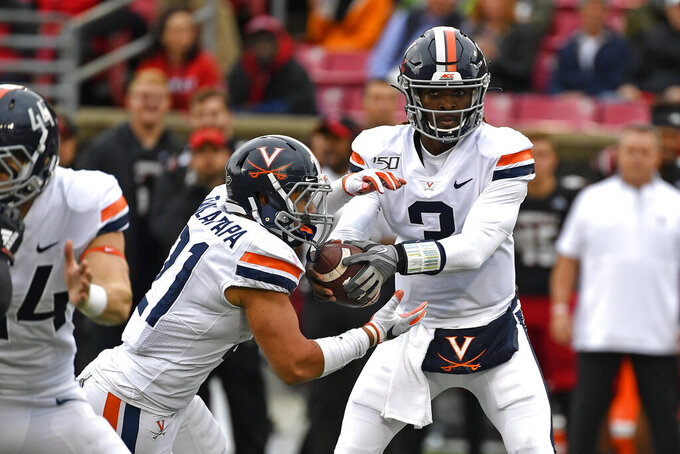 CHAPEL HILL, N.C. (AP) — Virginia can end its road slump and remain in control of its division by beating North Carolina. The Tar Heels can keep themselves near the top with a victory.

Then again, a loss wouldn't necessarily disqualify either team in the ACC's chaotic Coastal Division.

The Cavaliers (5-3, 3-2) visit the Tar Heels (4-4, 3-2) on Saturday night in a matchup of teams that share the lead of arguably the sport's most evenly matched division.

"North Carolina looks like about every other team in the Coastal," Virginia coach Bronco Mendenhall said, "and that's a compliment."

Indeed, there isn't much separation between the teams in the Coastal, which has produced six different winners in six seasons with Virginia — the preseason favorite — trying to become the seventh in seven years.

That seemed to be a foregone conclusion a few weeks ago, before the Cavaliers fell back to the pack following road losses at Miami and Louisville, in addition to a nonconference loss at Notre Dame.

Every team in the division has at least two ACC losses. Virginia and Tar Heels are joined by Pittsburgh and Virginia Tech at the two-loss mark, followed by Duke, Miami and Georgia Tech with three ACC defeats each.

"Lots of implications with this game, and we're anxious to play again, anxious to improve our team, anxious to keep building our program," Mendenhall said.

North Carolina, meanwhile, is just happy to be playing significant games again: The Tar Heels' dramatic 20-17 victory over Duke last week was their third ACC victory — one more than they had in 2017 and '18 combined.

"It's fun to be in late October and the game means something," coach Mack Brown said. "Our guys will be really excited about that, and I think our fan base is, too."

Some other things to know about the Virginia-North Carolina ACC matchup on Saturday:

Virginia QB Bryce Perkins is likely to play after he missed a series against Louisville when a Cardinals player rolled up on his knee. Mendenhall says he "can't tell you yet what level or what percentage or what impact it will have going forward" and praised his playmaking quarterback for giving "a valiant effort" in returning to the game. Perkins ranks fourth in the ACC in total offense, averaging 259.8 yards.

Not surprisingly, both teams are tough to beat when they're forcing turnovers. Virginia is 4-1 when it has at least one takeaway and 1-2 when it generates no turnovers. North Carolina is 3-1 when it has multiple takeaways but just 1-3 when it has fewer than two of them.

Nearly every game involving the Tar Heels goes down to the wire. Seven of North Carolina's eight games have been decided by eight or fewer points, including a 20-17 thriller over rival Duke last week that was punctuated by Chazz Surratt's game-sealing interception at the goal line in the final seconds. The only thing resembling a blowout on the Tar Heels' schedule was a 38-22 victory at Georgia Tech.

North Carolina leads the ACC and ranks sixth nationally with a plus-41 point differential in the fourth quarter, scoring 82 points in the final 15 minutes while allowing 41. Virginia has been strong in the final quarter, too, at plus-23 points (75-52).

This marks the 124th meeting between the schools — the only series played more frequently has been Minnesota-Wisconsin (128) — since they began playing in 1892. It's also the first time they'll play at night in Chapel Hill.