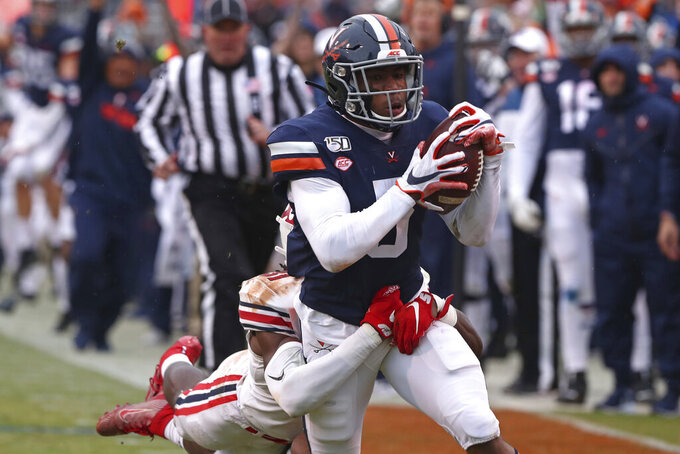 Here are things to watch in the Atlantic Coast Conference in Week 14:

No. 23 Virginia Tech at Virginia. The once-chaotic Coastal Division race comes down to one game, with the winner between the Hokies (8-3, 5-2) and Cavaliers (8-3, 5-2) advancing to face third-ranked Clemson in the league championship game next week in Charlotte, North Carolina. History seems to be on Tech’s side — the Hokies have won 15 straight meetings for the Commonwealth Cup. A Virginia win would make it seven different Coastal champions in seven years.

Clemson’s offense vs. South Carolina’s defense. The Tigers have the ACC’s most prolific offense, leading the league in both scoring (45.9 ppg) and total yards (543.1 ypg) by a wide margin. The Gamecocks have already sprung one colossal upset this season, forcing four turnovers while handing then-No. 3 Georgia its only loss. Clemson hasn’t had more than two turnovers in any game since the opener against Georgia Tech.

Boston College RB AJ Dillon is on track to set the league record for yards rushing per game for a career. Dillon averages 123.6 yards, which puts him ahead of former Florida State star Dalvin Cook. The junior has 4,204 yards rushing for his career and would need to average 199.5 yards both this week against Pittsburgh and in the Eagles’ bowl game to break Ted Brown’s 41-year-old ACC record of 4,602 career yards rushing.

North Carolina State will look to ruin rival North Carolina’s bowl hopes. The Wolfpack (4-7, 1-6) are assured of a losing season, and have lost six of seven, so the only way to salvage their lost season will be to spoil things for the Tar Heels (5-6, 3-4). UNC is an 8-point road favorite and is trying to qualify for the postseason for the first time since 2016.

Keep an eye on Wake Forest WR Kendall Hinton in his final regular-season game. The Demon Deacons typically generate big numbers from their receivers and Hinton — a converted quarterback — has stepped up with injuries to Scottie Washington and Sage Surratt, catching six passes for a career-high 189 yards and a touchdown last week against Duke. Now he faces a Syracuse defense that has allowed more than 550 total yards in five games.