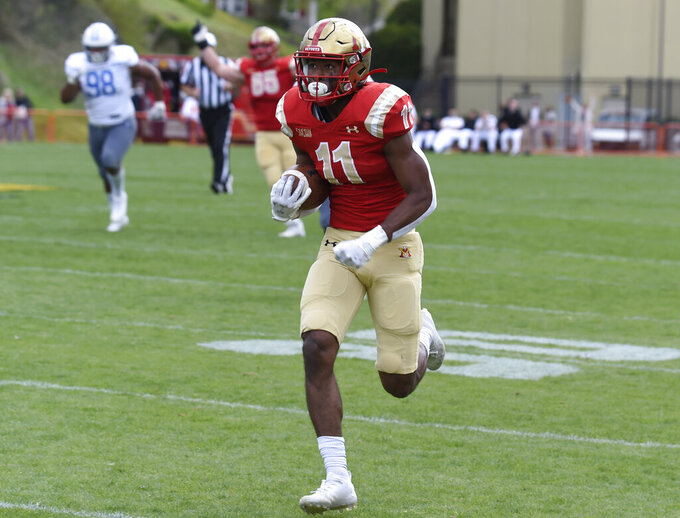 VMI receiver Michael Jackson breaks down the sideline after making a reception to score against The Citadel during an NCAA college football game, Saturday, April 17,2 021, in Lexington, Va. (David Hungate/Roanoke Times via AP) 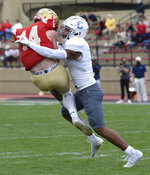 LEXINGTON, Va. (AP) — Seth Morgan threw three touchdown passes, and No. 15 VMI will enter the FCS playoffs for the first time with its 31-17 victory over The Citadel on Saturday.

The Keydets (6-1, 6-1), who also collected their first Southern Conference title since 1977, will find out their playoff opponent on Sunday when the Division I Football Championship Committee releases the 16-team bracket.

Morgan has started the last three games since taking over for the Keydets' all-time passing leader and Maryland recruit Reece Udinski, who suffered a season-ending ACL tear against Samford on March 20. Morgan completed 25 of 34 passes for 328 yards against The Citadel, connecting with 6-foot-4 Jakob Herres on 11 receptions for 123 yards that included a 50-yard touchdown catch.

Michael Jackson and Korey Bridy also caught a touchdown pass for VMI, which has won two straight since ending a 12-game losing streak to the rival Bulldogs (2-10, 2-6).

Quarterback Jaylan Adams had two touchdown runs for The Citadel. Adams had 83 yards rushing on 20 carries and was 2 of 8 passing for 16 yards.