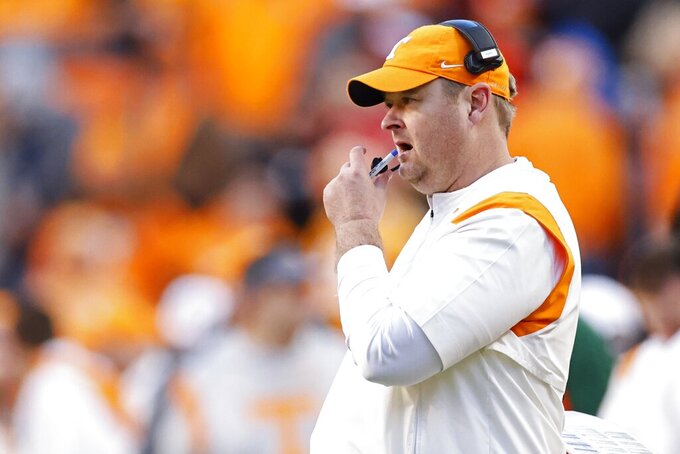 This time, the Volunteers will take on Purdue in an SEC-Big Ten matchup on Thursday. It’s an indication of how much has changed in a year for the Tennessee football program.

A year ago, the Volunteers withdrew from the Liberty Bowl because of a batch of positive COVID-19 test results/ The group included then-coach Jeremy Pruitt who was fired weeks later along with nine others for “serious” NCAA issues.

Heupel is the third coach to lead the Volunteers (7-5) to the Music City Bowl since 2010, a sign of the struggles this program has gone through. The Vols are playing now because university officials chose not to self-impose a postseason ban following the NCAA issues. Finishing the season with a win over Purdue is the primary focus for Tennessee after going 3-7 last year.

"It’s a big deal, just so people can get a glimpse of what we can be next year and starting off on the right foot for 2022,” Tennessee running back Jabari Small said. “It’s just important, finishing off strong, just finishing what we started.”

The Boilermakers, winners of four of their last five, are looking for their first bowl victory since 2017 and their most victories in a season since 2003. That would be a nice capper to a season highlighted by upsets of then-No. 2 Iowa and then-No. 5 Michigan State.

“It would be huge, and it's something we can build upon,” Purdue coach Jeff Brohm said Wednesday.

Purdue's last time in this bowl didn't go so well. Auburn routed the Boilermakers 63-14 in 2018. With only a few hundred tickets left Wednesday, a sellout is expected at Nissan Stadium — home to the NFL's Tennessee Titans.

Nobody plays or scores faster than Tennessee. The Vols run an average of 2.94 plays per minute and average 1.61 points a minute. That's helped Tennessee score an average of 38.3 points a game, which is ninth nationally. The Vols have scored 466 points, 18 shy of the school record of 484 set in 1993.

“We have to show what we can do, especially with this offense and the team that we’re playing against,” Tennessee senior offensive lineman Jerome Carvin. “We are playing a really good Big 10 team. It’s a statement game.”

Both Tennessee and Purdue have quarterbacks who have been very efficient and effective. Aidan O'Connell leads the Big Ten completing 73.5% of his passes, which ranks third nationally. He's been even better in seven straight games completing 75%, and he ranks 17th nationally with 3,177 yards and has 23 touchdown passes despite splitting time with Jack Plummer.

Hendon Hooker leads the Southeastern Conference and is third nationally with a 182.15 passer rating. He took over as starter Sept. 18 and has thrown for 2,567 yards this season with 26 TD passes and only three interceptions.

Purdue posted its best record since 2007 with a pair of All-Americans in wide receiver David Bell and defensive end George Karlaftis. Bell had 1,286 yards receiving, 21 yards shy of the school record. Karlaftis led the Boilermakers with 11 1/2 tackles for loss, five sacks and three forced fumbles.

The Boilermakers also will be without their second-leading receiver in 6-foot-3 junior Milton Wright. Abdur-Rahmaan Yaseen and Mershawn Rice, who are out with injury.

“Fortunately for us, we do have a lot of receivers on our team,” Brohm said. “We're down quite a few.”

Tennessee wide receiver Cedric Tillman, who recently announced he will return next 2022 season, has 57 catches for 931 yards and nine touchdowns. He could become the Vols' first 1,000-yard receiver since Justin Hunter in 2012. Tillman has 100 yards receiving in three straight games and four of his last five.

The Boilermakers rank 19th in the country allowing only 20.5 points a game, and they held four different opponents to single digits. That includes their 24-7 upset of Iowa on the road in October. They rank 21st giving up 194.6 yards passing per game and are 16th in red zone defense.