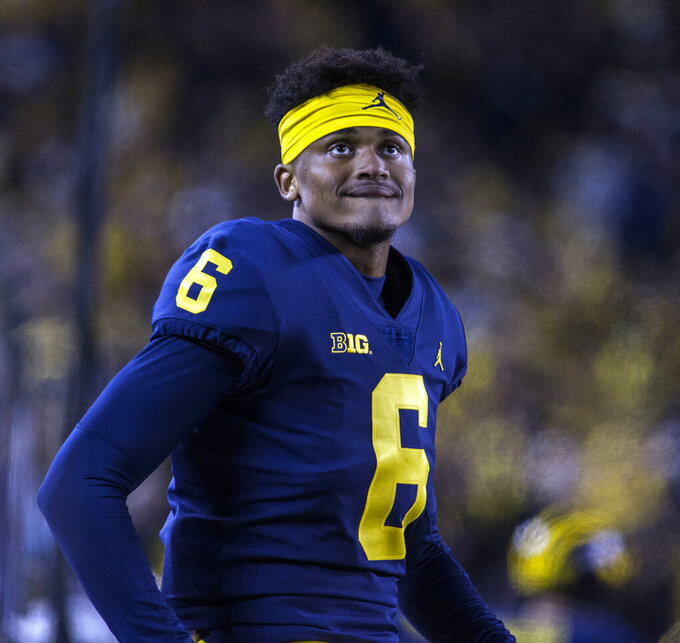 FILE - In this Saturday, Nov. 3, 2018 file photo, Michigan defensive back Myles Sims (6) watches from the sideline in the fourth quarter of an NCAA college football game against Penn State in Ann Arbor, Mich. With the college football season set to start for most teams this weekend, the NCAA has been handing down rulings left and right in waiver cases involving transfers seeking immediate eligibility. (AP Photo/Tony Ding, File)

With the college football season set to start for most teams this weekend, the NCAA has been handing down rulings left and right in waiver cases involving transfers seeking immediate eligibility.

Tennessee and Iowa got good news on a couple of high-profile players. Georgia Tech got one of its two waiver requests. And at Virginia Tech, offensive lineman Brock Hoffman had his final appeal for immediate eligibility denied, a decision that prompted Hoffman's father to post on Twitter a letter directed at NCAA President Mark Emmert that said the family will be "seeking legal counsel."

"The Process that you put my family through by giving us different reasons for denial and having us jump through hoops to gather different information every time we submitted it, shows how flawed your system really is," Brian Hoffman wrote in the letter posted Wednesday.

Hoffman's case highlights the frustration many players, parents, coaches, schools and fans have with the immediate eligibility waiver. When an NCAA directive opened the door last year for more athletes to gain immediate eligibility through the waiver process after transferring, it seemed like a reasonable compromise between the longtime transfer rules in football and some other sports that allow all transfers to switch schools without sitting out. Instead, it has created more outrage directed at the NCAA.

Tim Nevius, an attorney and former NCAA investigator who has worked on transfer waiver cases, said the NCAA needs to make uniform transfer rules across all college sports regarding transfers and immediate eligibility.

"I also think because of the perception that there are inconsistent decisions made on eligibility waivers that that puts a lot of pressure on the system to change as well," said Nevius, a former college baseball player.

The revised waiver process led to quarterback Shea Patterson playing last season for Michigan and quarterback Justin Fields being eligible this season at Ohio State after transferring from Georgia.

The NCAA does not publicly comment on waiver decisions, and declined to do so in the case of Hoffman, who transferred from Coastal Carolina to Virginia Tech in the offseason. Hoffman said the move was to be closer to his mother, who had surgery to remove a non-cancerous brain tumor two years ago. The family lives in Statesville, North Carolina, and playing in Blacksburg, Virginia, brought him about three hours closer to home by car.

The final ruling from the NCAA on Hoffman was announced Tuesday. His response on Twitter was to thank those who supported him and say he is looking forward to playing in 2020. His jab at the NCAA came in the form of an old photo posted on Twitter of former Oklahoma linebacker Brian Bosworth, who often butted heads with the NCAA, wearing a T-shirt that read National Communists Against Athletes.

For Tennessee defensive lineman Aubrey Solomon and Iowa receiver Oliver Martin, both Michigan transfers, NCAA rulings that came down this week were cause for celebration. Both were granted immediate eligibility.

The long wait, however, was excruciating.

"I'm excited for Aubrey," Tennessee coach Jeremy Pruitt said. "I know it's been hard on him."

Georgia Tech had immediate eligibility granted to defensive back Myles Sims, another player who left Michigan, but it was denied defensive lineman Antonneous Clayton, who previously attended Florida.

It was only a few weeks ago that Michigan coach Jim Harbaugh was criticized for being an obstructionist in an immediate eligibility waiver case involving offensive lineman James Hudson, who is now at Cincinnati and had his request denied.

"At the same time, I vehemently disagree with the NCAA's decision to not grant immediate eligibility for Antonneous," Collins said in a statement. "As an athletics department and a football program, we remain confident that he meets the stated criteria for immediate eligibility and by not granting it, the NCAA does not have the best interests of the student-athlete in mind."

Nevius is quick to point out that most coaches are against a uniform rule that would allow football players to use a one-time exception to transfer and play immediately, which would pretty much eliminate the need for waivers. That rule exists in many other NCAA sports. Harbaugh is one of the few coaches who has publicly come out in favor of allowing football players to use a one-time exception.

"On the one hand, (coaches) complain that there is this new era of free agency, which is completely overstated, while at the same time being able to skip from school to school chasing their own big paycheck," Nevius said. "And then on the other hand, they complain when the athlete they want to become eligible on their team doesn't have a successful waiver."