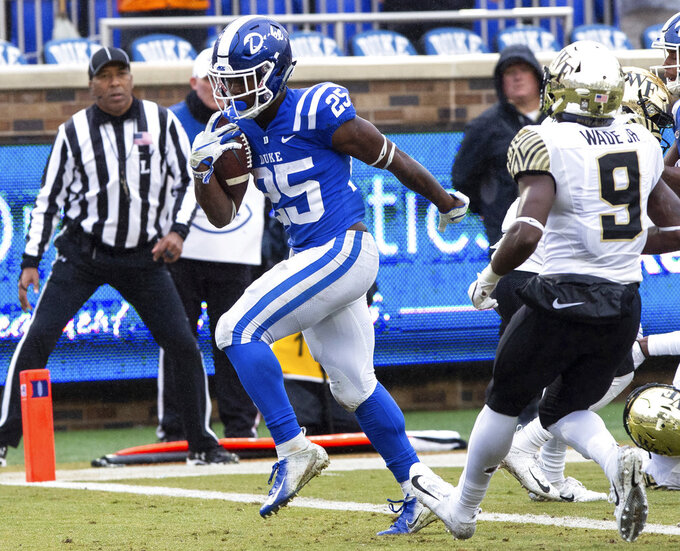 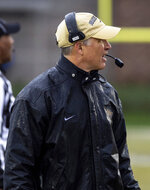 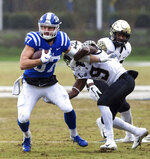 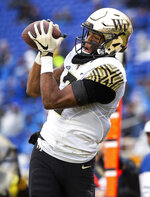 DURHAM, N.C. (AP) — Cade Carney rushed for a career-high 223 yards and Wake Forest closed out its regular season with a 59-7 win over Duke on Saturday.

The Demon Deacons encountered little resistance on a cold, rainy day in Durham. They scored touchdowns on three of their first four possessions. Quarterback Jamie Newman completed 7 of 8 passes for 76 yards and two touchdowns in the first quarter, while Carney added 86 rushing yards.

"I like coming over here to Durham and playing these guys," said Carney, who rushed for 108 yards and three touchdowns at Duke as a freshman in 2016.

Nasir Greer returned an interception 20 yards for a touchdown, and Nick Sciba kicked a short field goal to give Wake Forest a 31-7 lead at halftime. Touchdowns on the first two drives of the second half erased any doubts about the outcome.

"Certainly, this year, it was our most complete game," Clawson said.

Receiver Greg Dortch added 124 yards and a touchdown on 10 catches before sitting out the final quarter. Newman finished with 177 passing yards and four touchdowns. He added 50 rushing yards.

For Duke (7-5, 3-5), quarterback Daniel Jones completed 17 of 36 passes for 145 yards, one touchdown and one interception. The Blue Devils turned the ball over four times.

"I don't know if we really had the same intensity, the same fire we've played with all season, and I think that made us struggle," Jones said. "On offense, we couldn't get in a rhythm. Turnovers put us in bad positions. Just a tough day."

Wake Forest: The Demon Deacons earned bowl eligibility for the third consecutive season. It is only the second time in program history that Wake Forest qualified for a bowl game in three successive years. Former coach Jim Grobe guided the program to bowl games from 2006-08.

"We want to become a program that, even in our down years, we find a way to get to six or seven (wins) and get to a bowl," Clawson said. "We want going to bowls to be the expectation of our program."

Duke: The Blue Devils' struggles against the Deacs in Durham continued. Duke entered Saturday's contest having won five of its last six games against Wake Forest, but it has dropped eight of the last nine between the schools at Wallace Wade Stadium.

Both teams await the announcement of their respective bowl destinations on Dec. 2.