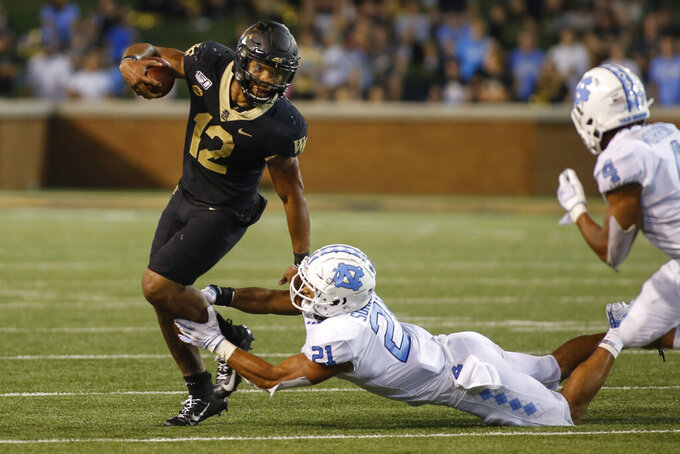 The unbeaten Demon Deacons have been good so far — but not good enough to overlook Elon of the FCS.

Wake Forest (3-0) wraps up nonconference play Saturday with a visit from the lower-division Phoenix (2-1).

"What's the quote, 'Those who don't learn history are doomed to repeat it?'" coach Dave Clawson said. "Our challenge to our football team is every week to be the best version of us."

That was the attitude the Demon Deacons used a week ago when they gave North Carolina its first loss in what was technically a non-league game that didn't count in the standings.

They want to bring that keep that mentality against an outmanned opponent they should beat.

"We believe that's good enough to win. I think we have to have that same approach every week," Clawson said. "Does our football team have the maturity and the ability to do that? It's hard to do that in college football."

The Demon Deacons have been getting it done through the air, leading the ACC with an average of 309 yards passing behind quarterback Jamie Newman. They've had a player with at least 158 yards receiving in each game, with Sage Surratt reaching that mark twice and Scotty Washington doing it once.

"It's all going like pistons. It's all starting to fire up right now," tight end Jack Freudenthal said. "We've just got to keep it rolling, keep our head down and just do what we've done the past few weeks each week."

Some other things to know about the Elon-Wake Forest game:

Wake Forest expects to have RB Cade Carney back after the senior missed the past two games with a shoulder injury. Christian Beal-Smith started against Rice and North Carolina and averaged 40.5 yards. Carney was a 1,000-yard rusher in 2018. Wake Forest is the only school in the ACC to have two rushers with a 100-yard game this season. "We're anticipating Cade is going to come back this week," Clawson said. "But we've got three good backs right now and we're very confident when any of these guys are in the game."

For the second straight game, a Wake Forest player will face off against his brother. Luke Freudenthal is a freshman offensive lineman at Elon while big brother Jack starts at tight end for the Demon Deacons. A week ago, Surratt went up against older brother Chazz Surratt, a linebacker at North Carolina.

Wake Forest is 15-3 in its last 18 nonconference games and two of those losses came to Notre Dame teams ranked in the top 10 at the time. The other one was against Army in 2016. The Demon Deacons have won five straight non-ACC games.

As expected, the Demon Deacons have dominated this series between schools from the North Carolina Triad. Wake Forest is 10-0-1 against Elon with its two wins in the modern era coming in 2009 and 2015. The closest the Phoenix have come is a scoreless tie in 1927.