Want drama? Then perhaps the game of the week is USC-UCLA 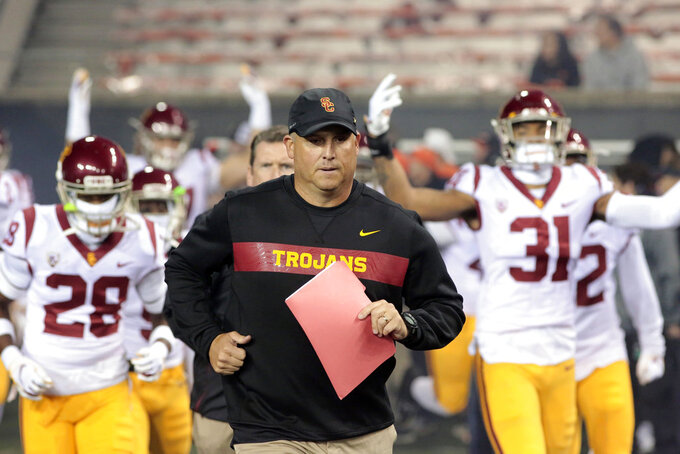 FILE - In this Nov. 3, 2018, file photo, Southern California head coach Clay Helton leads his team onto the field before an NCAA college football game in Corvallis, Ore. Helton has told his players not to worry about his job security as they head into the final two games of their 5-5 regular season. Helton realizes fans are unhappy just one season after he led the Trojans to the Pac-12 title. (AP Photo/Timothy J. Gonzalez, File)

GAME OF THE WEEK: There's nothing on the line, but perhaps the most compelling matchup this week is the rivalry game between USC and UCLA because of the drama that surrounds it. The Trojans were officially eliminated from contention for the Pac-12 title game with last weekend's loss to Cal at the Coliseum. The loss amped up the talk that Clay Helton's days at USC may be over. A loss to the team's rival would seem to all but cement his fate. On the other sideline there's the enigmatic Chip Kelly, who hasn't fared as well as some Bruins boosters would have liked in his first season as head coach. The Bruins have been eliminated from championship contention, too. A big rivalry win at the Rose Bowl would give those boosters something to cheer.

MATCHUP OF THE WEEK: Stanford quarterback K.J. Costello against California's defense. While Gardner Minshew has cornered the attention market among Pac-12 North QBs, Costello is putting up solid numbers in his sophomore season. He ranks second in the league (behind Minshew, of course) with an average of 285.4 passing yards per game, and he's thrown 23 touchdowns. He ranks atop the conference for passing efficiency (156.9). Cal's D, meanwhile, ranks atop the league for pass defense efficiency (112.0), interceptions (14) and overall pass defense, allowing opponents an average of 183.8 passing yards a game.

NUMBERS GAME: There are three teams in play in the South, so here are the scenarios for a trip to the Pac-12 championship: Arizona State controls its own destiny, and can capture the South's berth with victories at Oregon and then in the rivalry game against Arizona. Utah needs to win this weekend at Colorado (the Utes finish up against BYU) and get help with a Sun Devils loss in one of their last two games. The Wildcats need to win out (against Washington State this weekend and the rivalry game) and hope for a Colorado victory over the Utes. ... The North could come down to the Apple Cup. Washington and Washington State can clinch the berth by winning out. The Huskies host Oregon State this weekend, while the No. 8 Cougars have Arizona. ... Speaking of the Huskies, they have a 13-game winning streak at home. The Cougars' home streak is at 12. ... Jake Browning has 91 career touchdown passes, ranking him sixth on the Pac-12 all-time list. Jared Goff is fifth with 96. ... Stanford is bowl eligible for a 10th straight year.

UPSET WATCH: Right now Utah is a 7-point favorite over Colorado. The Utes jumped back into the rankings at No. 21 after a convincing win over Oregon last weekend. Colorado, on the other hand, has lost five straight, and has just been decimated by injuries this season. But the Buffaloes got receiver Laviska Shenault back last week after a three-game absence and he had a 100-yard receiving game in a 31-7 loss to Washington State. And the Buffs are at home. So maybe this is a good time for Colorado to salvage a season that started out with such promise.

IMPACT PERFORMER: Matt Gay, who won the Lou Groza award for the nation's best kicker, seems to just be getting better. If that's possible. Gay made all six of his field goal attempts in Utah's victory over Oregon last weekend, a school record. His 20 points tied a team record for a kicker, too. Among those field goals was a career-long 55-yarder. He's made 18 straight FGs, tying the school record.