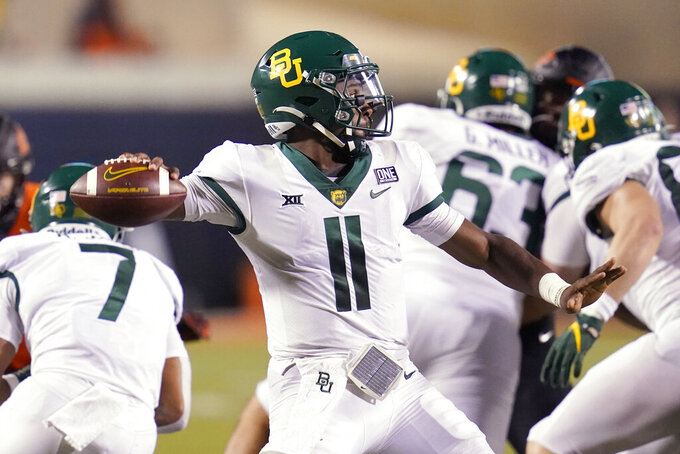 STILLWATER, Okla. (AP) — Oklahoma State coach Mike Gundy is trying to wrap his mind around these low-scoring games in what once was the wide-open Big 12.

The transition has been easier for him because his Cowboys are winning. No. 19 Oklahoma State held No. 21 Baylor to 280 total yards and beat the Bears 24-14 on Saturday in a matchup of Big 12 teams that entered the night unbeaten.

Such defensive performances are becoming the norm for the Cowboys — they haven’t allowed more than 23 points in a game this season.

“Obviously, the defense playing good,” Gundy said. “I just don’t want to jinx them. They just keep playing, good. I hope that they just continue on like that."

The offense did just enough. Jaylen Warren ran for 125 yards and two touchdowns and Tay Martin caught seven passes for 108 yards for the Cowboys (5-0, 2-0).

Oklahoma State's Spencer Sanders passed for 182 yards and a touchdown and ran for 76 yards, but he helped Baylor stay in the game by throwing three interceptions.

“We’ve got to play better at that position than he did tonight when it comes to turning the ball over," Gundy said. “He’s a dangerous player. But no, we can’t miminize those mistakes."

Abram Smith rushed for 97 yards and a touchdown for Baylor (4-1, 2-1). The Bears, who were coming off a win over Iowa State, missed a chance to beat ranked teams in consecutive weeks for the first time since 1974.

Warren closed out Oklahoma State's opening drive with an 8-yard touchdown run. He gained 51 yards on seven carries during the possession.

Sanders shook off two early interceptions and threw a 32-yard touchdown pass to Rashod Owens with 36 seconds left in the first half to give the Cowboys a 14-0 lead.

Oklahoma State outgained Baylor 256 yards to 99 in the first half.

Baylor punted on its first eight possessions. The Bears had 23 yards rushing as a team late in the third quarter before Smith ripped off a 55-yard touchdown run on a fourth-and-2 to cut Oklahoma State's lead to 14-7.

“You could see it on the sideline, everybody was fired up now,” Smith said. “The momentum — I felt like it changed right there, fired a lot of guys up on defense, kind of showed that we would hold our own on our side of the ball just as much as they were holding their own.”

Oklahoma State led 17-7 before Baylor's offense, which had been bottled up most of the night, went on a seven-play, 84-yard drive. Gerry Bohanon scored on a 1-yard quarterback sneak to trim Oklahoma State's lead to 17-14 early in the fourth quarter.

Warren put the game away with a 4-yard score on a fourth-and-1 with 2:10 remaining.

Baylor coach Dave Aranda said the team played with better energy in the second half to make the game competitive.

Baylor: The Bears entered the game with the nation's No. 6 rushing attack, but their ground game was bottled up for most of the night. Baylor finished with 107 yards on 29 attempts after entering the night averaging 272 yards rushing per contest.

Oklahoma State: The Cowboys won, but they were fortunate to escape after making so many mistakes. They'll need to clean it up if they hope to contend for the Big 12 title.

At halftime, Oklahoma State honored its 2011 team that won the Big 12 and beat Stanford in the Fiesta Bowl. Only an upset loss to Iowa State kept the Cowboys out of the national title game. The Cowboys finished No. 3 in the final AP poll.

Biletnikoff Award winning receiver Justin Blackmon and quarterback Brandon Weeden were among the approximately 50 players from that team who were on the field as highlights from the season played on the big screen.

Baylor’s Trestan Ebner was fourth in the nation with 166 all-purpose yards per game. He finished with 71 yards, all on four kickoff returns. He had eight carries for zero yards, didn’t catch a pass and had zero yards on his only punt return.

Gundy said he challenged the team to slow Ebner in the return game.

“I thought we had fantastic coverage in our kick coverage and punt coverage,” he said. “A big part of the game for us.”

Gundy, a former Oklahoma State quarterback, on Sanders: “It’s OK every now and then to go down and not force a throw. You know, easier said than done. I can say that because I’ve lived that life. But we’ve just got to stay with him.”