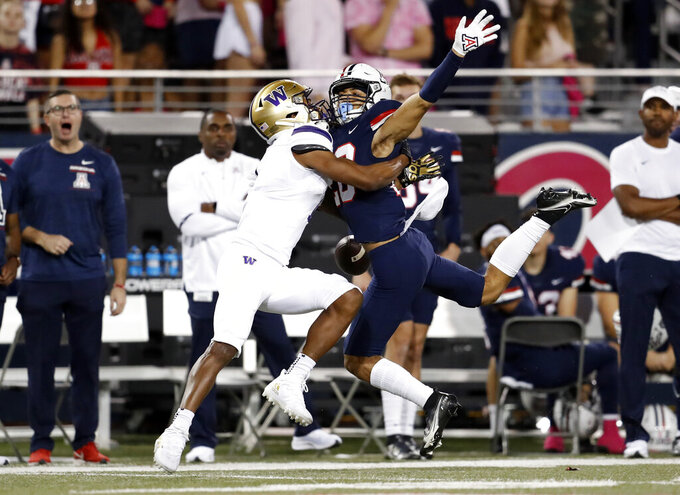 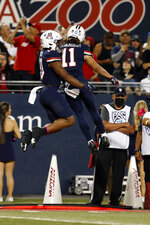 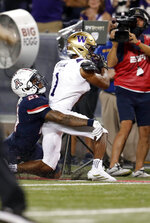 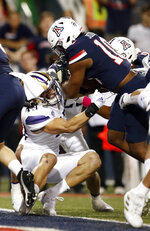 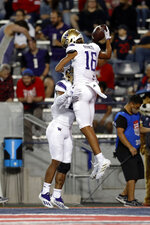 TUCSON, Ariz. (AP) — Washington's coaches teach the defensive lineman to fall back when they don't feel much resistance. A screen pass is likely coming.

Taking those lessons to heart, Tuli Letuligasenoa felt the offensive lineman brush by, so he dropped into coverage.

Washington's 300-pound wrecking ball didn't know if he had the ball in his hands until he was being hit, but it turned out to be the play that shifted momentum in the Huskies' favor.

“They were going on that drive, three, four yards at a time,” Washington coach Jimmy Lake said. “That interception by Tuli was a huge charge to the sideline, the offense, the defense, the whole team.”

Washington (3-4, 2-2 Pac-12) stumbled through the first half and was down nine headed into the fourth quarter. Letuligasenoa stopped Arizona's bid to pad its lead and Morris took it from there, hitting Terrell Bynum on two long passes to set up two scores.

Washington's defense also shifted into a new gear, shutting down Arizona after being hit with big plays earlier.

“We were down, but we rolled on for a little bit,” said Bynum, who had five catches for 143 yards and a touchdown.

Arizona (0-7, 0-4) seemed to be on its way to ending its school-record losing streak, taking a 16-7 lead into the fourth quarter before imploding.

The Wildcats were hit with key penalties, Will Plummer threw the big interception and the defense buckled after dominating the first half, leaving them winless since December 2019.

“We continue to get in fist fights with our hands tied behind our backs,” Arizona coach Jedd Fisch said.

Morris alternated the first two series with Sam Huard, but didn’t matter who was taking snaps in the first half. Washington had 65 yards and punted six times.

The Huskies snapped out of it in the second half.

Bynum capped an 81-yard opening drive by going over Arizona defensive back Jaydin Young’s back for a 16-yard touchdown catch. Morris connected with Bynum on a 51-yard pass after Letuligasenoa's pick, setting up Cameron Davis 9-yard TD run the next play that pulled the Huskies within 16-14.

Morris, who had his nose bloodied early in the game, hit Bynum on another 51-yard pass and, with the help of a defensive holding penalty on third down, found Rome Odunze for an 8-yard touchdown to give the Huskies the lead.

“He was bulls-eye on those,” Bynum said.

Getting the start after Gunner Cruz suffered a season-ending thumb injury last week, Plummer couldn’t get much going in the first quarter — 17 yards — before orchestrating a 10-play, 64-yard drive. Receiver Jamarye Joiner scored on a 1-yard keeper and Lucas Havrisik’s 50-yard field goal put the Wildcats up 13-0 at halftime.

Arizona struggled to move the ball in the second half, but was driving for a chance to extend its lead before Plummer threw an interception right to Letuligasenoa.

The Wildcats had one more chance, stopping Washington on third down with 2:26 left, but were called for an illegal substitution, giving the Huskies a first down and a chance to all but run out the clock.

“Obviously, that’s inexcusable,” Fisch said. “That’s not something that was even remotely in my mind that could have happened.”

Washington came to life after a dismal first half to avoid perhaps the most disheartening loss of an up-and-down season.

The Wildcats had their best chance to end the longest losing streak in history within grasp, only to let it slip their fingers.

Huskies defensive back Alex Cook was carted off with an apparent neck injury after a big collision in the first quarter. Washington’s medical staff rushed onto the field, held him still and began checking his neck.

Washington’s players and coaches, along with several from Arizona’s sideline, walked onto the field as trainers strapped him to a stretcher. Cook was placed on an ambulance gurney and lifted onto a cart.

Lake said Cook was able to move his extremities at the hospital and was going to join the team for the trip home.

“Still some tests, but that's the best possible news with him being able to come back with us,” Lake said.

Washington plays at Stanford on Oct. 30.

Arizona is at Southern California on Oct. 30.