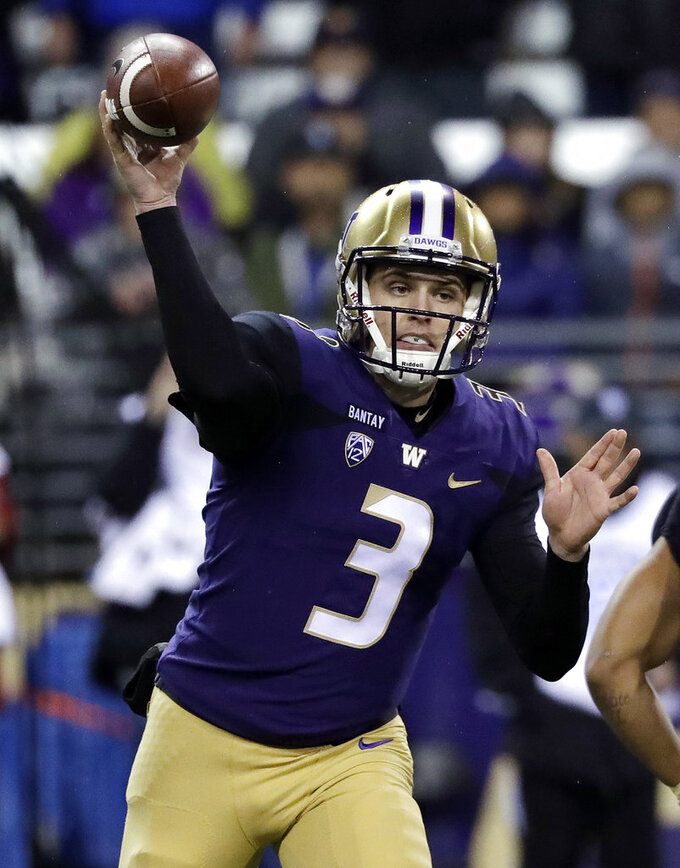 SEATTLE (AP) — Myles Gaskin sat as a spectator for two straight games with Washington knowing it would need it senior running back when Stanford rolled into town.

The Huskies ended up leaning on Gaskin perhaps more than they expected.

"There's no way to put into words because that guy is unbelievable," Washington quarterback Jake Browning said. "When us two are back there I feel really good."

Gaskin returned after missing two games due to a shoulder injury to rush for a season-high 148 yards and one touchdown, and Washington built a big early lead before needing Taylor Rapp's interception on the final play to beat Stanford 27-23 on Saturday night.

The matchup was essentially an elimination game in the Pac-12 North Division race and the Huskies got their senior star ball carrier back on the field just in time. Gaskin sat out a win over Colorado and loss to California, and his absence only highlighted his importance to Washington's offense.

"He's the best at hiding behind his guys, letting things develop and getting to the right spot," Washington coach Chris Petersen said.

Gaskin and Browning were the foundation of the Huskies (7-3, 5-2 Pac-12) building a 21-0 lead, scoring on their first three possessions. Browning ran for a 2-yard touchdown , threw an 11-yard TD pass to Drew Sample, and Gaskin's 6-yard run early in the second quarter capped the scoring blitz.

But the Huskies offense became conservative and was unable to find the end zone the rest of the way, making for a nervy second half after Stanford's K.J. Costello got hot.

"When things are tough and things are dark and it's us against the world, we are at our absolute best. I love that about our guys," Stanford coach David Shaw said. "The problem is we create the situation that puts us there. We've got to find a way to stop screwing it up to get ourselves to the point where we have to play our best just to come back and be in the game."

Costello threw a 14-yard touchdown to Kaden Smith and Bryce Love ran for a 5-yard TD late in the third quarter to pull Stanford (5-4, 3-3) within 24-14. Collin Riccitellihit a 21-yard field goal with 9 minutes remaining after Washington's defense held inside the 10 to pull the Cardinal within 24-17.

Washington answered with Peyton Henry's 38-yard field goal with 5:09 left for a 10-point lead, but Costello made the final minutes uncomfortable hitting Trenton Irwin for a 33-yard touchdown with 3:24 left. Riccitelli missed the extra point and the Huskies lead was 27-23.

The missed extra point ended up being a big moment.

Washington was only able to run 79 seconds off the clock before punting and Stanford took possession at its 15 with 2:05 left. Instead of a field goal being enough, the Cardinal needed a touchdown because of the missed extra point.

Costello hit five passes to get to the Washington 34 with 10 seconds left. He missed an end zone throw for Irwin and on the last play Costello was intercepted by Rapp at the goal line.

Costello was 29 of 43 for 347 yards, two touchdowns and three interceptions. Love rushed 18 times for 71 yards.

"This one really hit me in terms of 'man, we've had the feeling a lot in the last month.' It's a very similar feeling and it's a feeling that nobody wants to have. I don't wish upon anybody," Costello said.

Washington's first quarter and most of the first half was nearly flawless. The Huskies scored touchdowns on their first three drives. They picked off Costello twice, including a diving interception by 320-pound defensive tackle Greg Gaines off a pass deflected by Ben Burr-Kirven. Stanford failed to get a first down in the first quarter and had just 96 yards of offense until the final drive of the half.

Stanford played the final 2 ½ quarters without leading receiver J.J. Arcega-Whiteside after he left midway through the second quarter with a right ankle/foot injury. Arcega-Whiteside was held without a catch until grabbing a pass from Costello with 5:24 left in the first half. Arcega-Whiteside appeared to be injured while being tackled and left the field with help from trainers.

Stanford: The Cardinal remained winless this season when not forcing a turnover. ... Stanford has lost four regular season games in consecutive seasons for the first time since the 2008-09 seasons.

Washington: The Huskies still have a path to the Rose Bowl in their control. After a bye next week the Huskies will host Oregon State. A win against the Beavers would give Washington a chance to win the Pac-12 North by beating Washington State in the Apple Cup.

Washington: The Huskies get a week off before hosting Oregon State on Nov. 17.