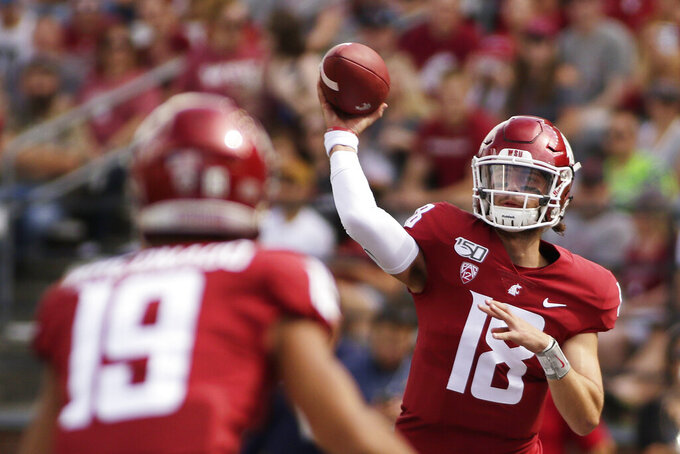 Here are some things to watch in the Pac-12 Conference this week:

GAME OF THE WEEK:

No. 20 Washington State (2-0) against Houston (1-1) at NRG Stadium. Are the Cougars the real deal? Washington State will get its first real test of the season Friday night in Texas. The Cougs had easy wins over New Mexico State and Northern Colorado in Pullman to start the season. Anthony Gordon is averaging 400-plus yards in two straight games. Brandon Arconado caught eight passes for 127 yards and a score in Washington State's 59-17 win over FCS-level Northern Colorado last weekend. But Mike Leach knows the team hasn't shown anything yet. "I think that we're not just a team that's improving, but we're one that desperately needs to improve. If we don't improve, we are going to be an incredibly average team," he said. Houston fell to Oklahoma in Norman in its opener but beat Prairie View A&M last weekend. Junior running back Kyle Porter had a career-high 120 yards rushing in the victory. It is the fourth meeting between the two teams, and the Cougars hold a 2-1 edge.

MATCHUP OF THE WEEK: USC quarterback Kedon Slovis against BYU. The Trojans' freshman quarterback made his debut as a starter in last weekend's win over Stanford and surprised almost everyone by throwing for 377 yards and three touchdowns against the Cardinal. Slovis took over at QB for the No. 24 Trojans after J.T. Daniels was hurt in the opener. What will he do as an encore? BYU is 1-1 with a loss in the season-opening Holy War against Utah before an overtime win last weekend over Tennessee. BYU is allowing opponents 393 total yards of offense a game (83rd nationally), but just 141 passing yards to rank No. 20 in pass defense. Linebacker Kavika Fonua is coming off a career game with 10 tackles against Tennessee and an interception that helped set up a touchdown.

NUMBERS GAME: Cristian Zendejas was a Pac-12 Player of the Week after his debut for Arizona State last week, kicking field goals of 36, 26, 35 and 26 yards in a 19-7 Sun Devils win over Sacramento State. Washington's sophomore kicker Peyton Henry was also 4-for-4 last weekend against Cal, including a 49-yarder. ... There are five teams nationally that haven't turned the ball over this season, including Utah and Oregon State. ... Steven Montez's 96-yard pass to K.D. Nixon in Colorado's victory over Nebraska last weekend was the longest play from scrimmage in Buffs history. ... Utah's Zack Moss is getting closer to the school's career rushing record of 3,219 yards set by Eddie Johnson from 1984-88. Moss is just 301 yards shy at 2,918 yards. ... Oregon's Justin Herbert has thrown a touchdown pass in 30 straight games, the longest current streak in the nation. ... Arizona State is 2-0 but faces a tough test on the road against No. 18 Michigan State (2-0) on Saturday. Likewise, Stanford (1-1) is at No. 17 UCF (2-0) this weekend.

UPSET WATCH: It in all likelihood it won't happen, but it would sure shake things up if Hawaii (2-0) beat its third straight Pac-12 team on Saturday when the Rainbow Warriors visit Washington (1-1). Hawaii surprised Arizona 45-38 in the season opener then bested Oregon State 31-28 last weekend. Hawaii has never defeated three Power 5 schools in a single season. Fun Fact: One of the Rainbow Warriors' biggest upsets came against Washington in 1974, when they were 50-point underdogs and won 10-7. For this matchup, Hawaii is a 21½-point underdog. No. 23 Washington is coming off a stormy upset loss to California.

IMPACT PERFORMER: Washington State quarterback Anthony Gordon appears to be picking up right where Gardner Minshew left off. The senior quarterback is ranked second nationally for average passing yards per game at 442, second for total offense with an average of 443.5 yards a game, third for completions per game with an average of 30, fourth for completion percentage at .811 and finally, third with a 218.9 quarterback rating.