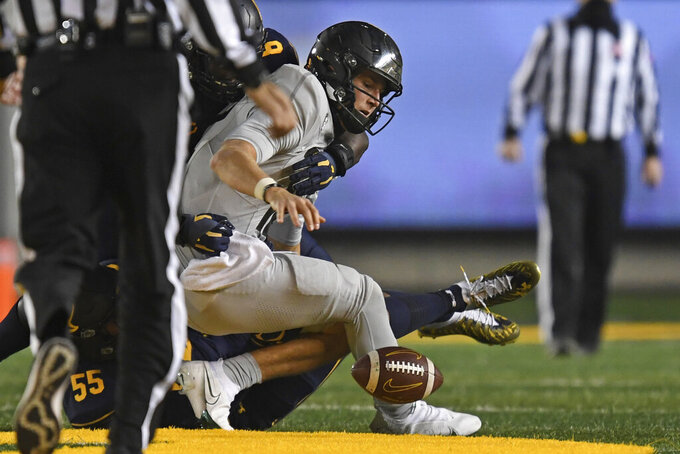 Washington State coach Nick Rolovich acknowledges his team had a meltdown in falling behind by four touchdowns in the first quarter of a loss at Southern California.

The challenge is to avoid another collapse when California visits Pullman on Saturday night.

Morale this week has been “much better than I thought it would be,” Rolovich said. "They didn't like getting embarrassed.''

Washington State (1-2) will face a California (1-3) team that is coming off a 21-17 upset of Oregon in Berkeley that knocked the Ducks from the Top 25.

The game Saturday will be Washington State’s first December home game since the 2010 Apple Cup and also the school’s latest regular-season game since the 1929 football season. The forecast is for wet and chilly conditions.

Normally potent Washington State has struggled to score recently. The Cougars have been outscored 81-42 in their past two games. They have had particular problems with California, scoring just 36 point in their last three outings against the Bears.

"That was not indicative of the team they have,'' Wilcox said.

The Cougars no longer use an Air Raid offense, as Rolovich has installed a run-and-shoot that features more runs.

“The offense is not the same offense,'' Wilcox said. ”They've got some good backs. It's a difficult offense to defend.''

The Cougars may be getting their best offensive player back for Saturday’s game.

Running back Max Borghi returned to practice last week but didn’t travel with the team to Los Angeles. After two full weeks of practice, Borghi might play against the Golden Bears. Borghi rushed for 817 yards and caught 86 passes for 597 yards last season, but he has yet to play this year because of a back injury.

“He is progressing,” Rolovich said. “Just him being out there raises everyone.”

California's Kuony Deng was named the Pac-12 Defensive Player of the Week for his performance against Oregon.

Deng forced a pair of fourth-quarter fumbles in Cal territory that were both recovered by Cal to end potential go-ahead drives. The two forced fumbles were the first of his Cal career.

Deng added a team-high eight tackles, 1.5 tackles for loss and 0.5 sacks while helping to hold an Oregon team that had been averaging a Pac-12-best 38.5 points per game coming into the contest to less than half that.

Freshman quarterback Jayden de Laura is expected to start his fourth consecutive game for the Cougars but backups Cammon Cooper and Gunner Cruz need to be ready in case he struggles. Cooper and Cruz saw the first game action of their careers against USC.

“He got outside the system a little bit,” Rolovich said of de Laura's struggles last weekend. “The receivers did not have their best day.”

Wilcox is not worried about playing in temperatures expected to be in the high 20s on Saturday night. “We are not talking about minus-10,” Wilcox said. “We are going to make the most of it.”

“Both teams will be playing in the elements,” he said. “Our guys will be excited to experience that.”

There is a chance of snow, which would be Cal's first game in snow since a 1996 contest in Pullman.