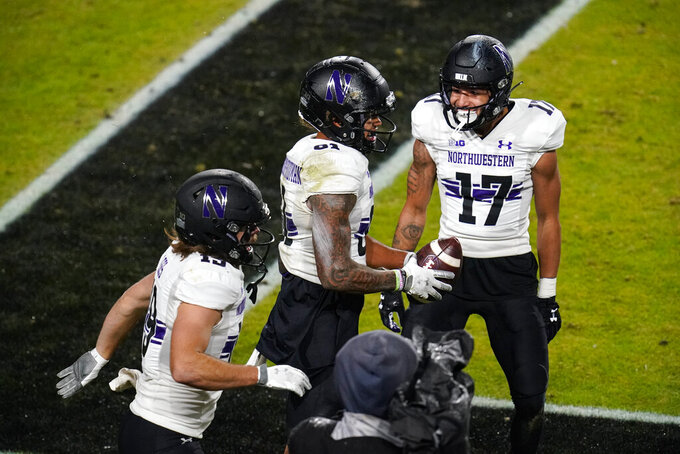 The Big Ten's four unbeaten teams square off Saturday in two games that could go a long way toward settling the division races.

No. 9 Indiana faces No. 3 Ohio State in a top-10 matchup featuring the conference's overwhelming favorite against its best early season story.

The Hoosiers have already snapped a 24-game losing streak against Michigan. They'll look to break a 25-game skid against the Buckeyes.

Over in the Big Ten West, it's No. 10 Wisconsin at No. 19 Northwestern in a matchup of the conference's two best defenses.

The Badgers have only played twice after a COVID-19 outbreak shut them down for two weeks. The Wildcats are looking to go 5-0 in the Big Ten for the first time since 1996.

The Bedlam series is historically lopsided with the Sooners leading 81-18-7, and not much better than that recently.

Under coach Mike Gundy, the Cowboys have been more competitive with the Sooners, yet have only won two of 15 meetings.

Nine of those 15 games have come with both teams ranked, and only four times during that span have the Cowboys been the higher ranked team entering the game.

One of Gundy's two victories against the Sooners came when he had the higher ranked team and another came when Oklahoma State was unranked.

The Sooners enter on a four-game winning streak, having scored 62 points in each of their last two games — albeit against Texas Tech and Kansas.

If Oklahoma State can ride its stingy defense to a victory, it will be in a strong position to reach the Big 12 title game. If the Sooners win, the Big 12 race will be bedlam.

Lawrence hasn't played in a while. He missed two games after testing positive for COVID-19, including the Notre Dame game, and then Clemson had a week off before playing at Florida State on Saturday.

The Seminoles have hit rock bottom so this isn't really the type of game that will swing the Heisman race, but just having Lawrence back in the mix seems significant. The 'Noles are definitely a stat-padding opponent at this point.

3-0 — No. 20 Southern California will try to start 3-0 in the Pac-12 for the first time since 2006 when the Trojans visit Utah. USC has lost three straight in Salt Lake City.

19 — Straight victories for Appalachian State against Sun Belt teams not named Georgia Southern. The Mountaineers have mostly rolled through their conference other than their old FCS rivals from Statesboro, Georgia. App State faces No. 15 Coastal Carolina in a key game in the Sun Belt East.

54 — Points scored by Mississippi State in five games since scoring 44 in a season-opening victory against LSU. The Bulldogs visit No. 13 Georgia on Saturday. Georgia has the top defense in the SEC at 5.03 yards per play allowed.

619.1 — Yards per game for UCF's offense, tops in the nation and about 6 yards behind the FBS record for a season set by Houston in 1989. The Knights host No. 7 Cincinnati on Saturday. The Bearcats' defense allows only 300 yards per game.

Any matchup of triple-option teams is worth a look. The Eagles and Black Knights average a combined 578 yards rushing per game. And the way the clock rolls for these grounded offenses, it shouldn't take more than three hours for them to get the game in.

The Wolverines are 1-3, having lost three straight. Things look very bad in Ann Arbor. Now, take a moment and think about how much worse it would be if Michigan can't beat Rutgers?