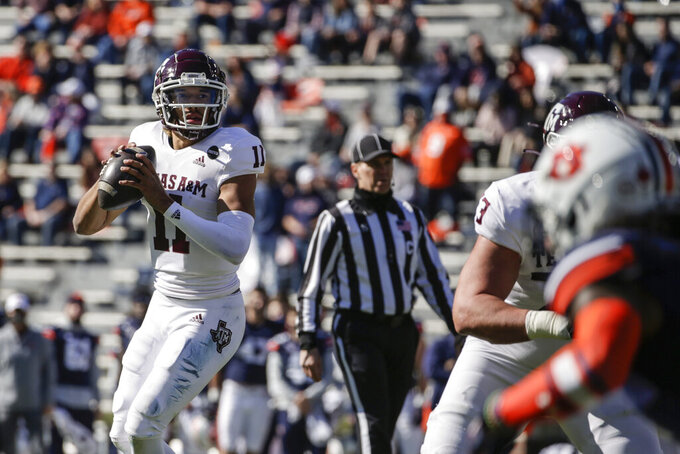 Texas A&M quarterback Kellen Mond (11) looks to pass against Auburn during the first half of an NCAA college football game on Saturday, Dec. 5, 2020, in Auburn, Ala. (AP Photo/Butch Dill)

Clemson and Ohio State go into the weekend with the most at stake, and Texas A&M waiting in the wings if it takes care of business.

Nine Football Bowl Subdivision conferences will hold championship games Friday and Saturday. A smattering of other games will be played, all rescheduled to this week because of COVID-19 issues.

Titles games in the Atlantic Coast Conference and Big Ten are most likely to impact the College Football Playoff.

Clemson (9-1, No. 3 CFP) meets Notre Dame (10-0, No. 2) in the ACC game and would lock up a sixth straight playoff appearance with a win. The Tigers might sneak in with a close loss, though no two-loss team has ever been selected. The Irish, short of getting blown out, probably are in regardless.

The playoff field will be announced Sunday.

Notre Dame won the regular-season meeting 47-40 in two overtimes. DJ Uaigalelei quarterbacked Clemson that day because Trevor Lawrence was in the COVID-19 protocol. Lawrence will be back. He has lost only once as a starter, and that was in last season's national championship game against LSU.

The Irish's defensive line arguably is best in the nation and held Travis Etienne to 28 yards on 18 carries in the first game, his lowest total in three years.

Heisman Trophy voters have until Monday to submit their ballots. Those who are undecided can use the SEC championship game to sort things out. The three top contenders will be on the field.

DeVonta Smith, Jones' favorite target, has caught 83 balls for 1,327 yards. With 15 touchdown catches, he would tie Amari Cooper for the school single-season record with one against Florida.

A big performance Saturday might allow Gators quarterback Kyle Trask to make up ground he lost in the LSU game. Trask is far ahead of the next closest QB in passing yards (3,717) and TD passes (40). Though he was intercepted twice last week, he has thrown just five picks for the season.

33: UAB wins since restarting the program in 2017, most in Conference USA.

102: Points allowed by Northwestern, fewest through seven games since 1995.

1912: The most recent year Iowa State won a conference championship.

UAB is in the conference championship game for the third straight year and Marshall for the first time since winning the title in 2014.

The teams have highly ranked defenses, but keep an eye on the quarterbacks. UAB's Tyler Johnston III, who missed five games with a shoulder injury, was sharp in his return last week against Rice. Marshall freshman Grant Wells has 11 completions of 40 yards or longer.

Houston's Dana Holgorsen might be in real trouble if not for the fat five-year, $20 million contract he signed upon his hiring two years ago.

The Cougars are 3-4 and have accepted an invitation to play Hawaii in the New Mexico Bowl on Dec. 24. Holgorsen is 7-12 in two seasons, 4-8 in the American Athletic Conference, and is testing the patience of Cougars fans.