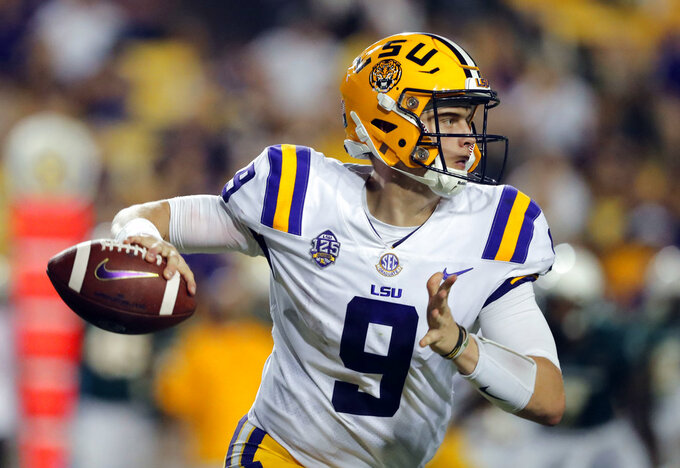 FILE - In this Sept. 8, 2018 file photo LSU quarterback Joe Burrow (9) scrambles as he looks for a receiver in the second half of an NCAA college football game against Southeastern Louisiana in Baton Rouge, La. The stage is set for another thriller for LSU at Auburn. Burrow, good but not great so far, will have to contend with a raucous crowd at Jordan-Hare Stadium and an inspired Auburn defense. (AP Photo/Gerald Herbert, file) 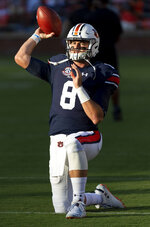 The Southeastern Conference's West Division commands the spotlight Saturday, with top-ranked Alabama opening league play at Mississippi, and No. 7 Auburn hosting No. 12 LSU.

The Crimson Tide rolled Ole Miss 66-3 last year and head to Oxford as three-touchdown favorites. Don't write off the Rebels, not with Jordan Ta'amu throwing to the best receiving corps in the nation.

There are two nonconference games involving Top 25 teams. No. 4 Ohio State plays No. 15 TCU at AT&T Stadium in Arlington, Texas, and No. 17 Boise State travels to No. 24 Oklahoma State.

The stage is set for another thriller. Two years ago, Auburn hung on to win 18-13 when video review showed LSU didn't get off the play resulting in what would have been the winning touchdown before the clock expired. Last year, LSU erased a 20-0 deficit to win 27-23.

LSU quarterback Joe Burrow, good but not great so far, will have to contend with a raucous crowd at Jordan-Hare Stadium and an inspired Auburn defense. Auburn QB Jarrett Stidham will be challenged by a sack-happy LSU defense that features one of the nation's top cornerbacks in Greedy Williams. Whichever running back has the better game — LSU's Nick Brossette or Auburn's JaTarvious Whitlow — could decide this one.

Haskins put up huge numbers in lopsided home wins over Oregon State and Rutgers. Now let's see what he can do against one of the nation's most defensive-minded programs in TCU at AT&T Stadium in Arlington, Texas, just 14 miles from the Horned Frogs' campus.

Haskins is completing 79 percent of his passes and has totaled 546 yards, nine touchdowns and one interception. If he plays at that level against TCU's 4-2-5 defense, and again in two weeks at Penn State, he'll go into October as a serious Heisman contender.

31: Consecutive games in which Virginia H-back Olamide Zaccheaus has caught a pass.

41: Wisconsin's consecutive home nonconference wins, longest active streak in the nation and fifth-longest since 1946. The Badgers play BYU on Saturday at Camp Randall.

200: Wins for Boise State since 2000 if the Broncos beat Oklahoma State. Boise State enters the game with the most wins in the country during that span.

374: The NCAA-record streak of games in which Florida has scored.

.915: Oklahoma's series winning percentage against Iowa State (74-6-2), the best by one FBS program against another with a minimum of 50 games played. One of the Cyclones' six wins in the series was last year in Norman.

Chip Kelly is still looking for his first win as Bruins coach. Will he get it before the Pac-12 opener at Colorado Sept. 28? True freshman Dorian Thompson-Robinson started at quarterback against Oklahoma in place of Wilton Speight. Kelly hasn't announced his QB against Fresno State, which won the teams' last two meetings (2003, 2008).

Also worth keeping an eye on are Missouri at Purdue, and Houston at Texas Tech.

That second loss in two years to Maryland and a one-touchdown win over a bad Tulsa team have left Texas coach Tom Herman in critical need of a big win. His opportunity comes at home against 22nd-ranked Southern California. A loss would make Herman 8-8 in two seasons heading into next week's Big 12 opener against TCU.

Texas led in the final minute of regulation at the Los Angeles Coliseum last year. But Sam Darnold drove the Trojans for the tying field goal to force overtime, and Texas QB Sam Ehlinger fumbled in the second OT to set the stage for USC's 27-24 win.