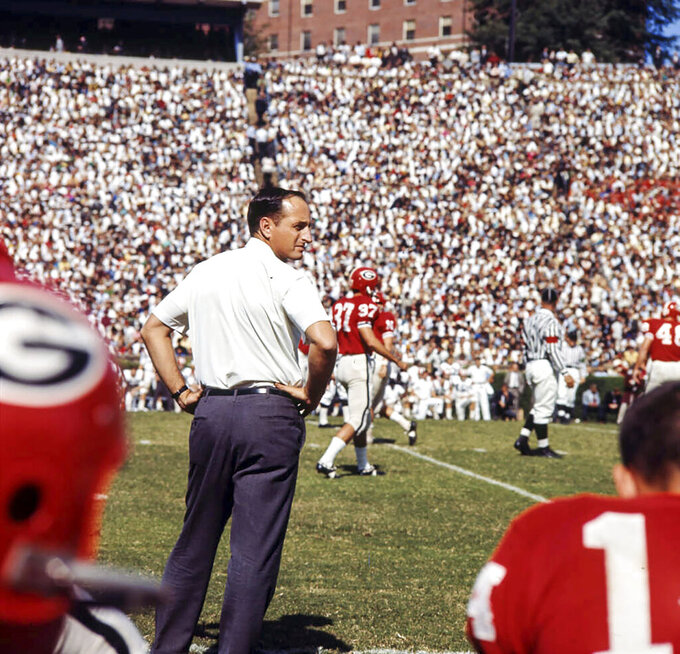 The longtime Georgia coach had reason to celebrate.

The field at Sanford Stadium was formally named after Dooley during a ceremony before the home opener against Murray State on a sweltering Saturday.

Dooley, his wife of nearly 60 years, Barbara, and numerous family members were surrounded in the middle of the field by team captains from his 25-year coaching tenure as the "Dooley Field" sign was unveiled on the facade of the club level above the 50-yard line.

Even though temperature climbed into the mid-90s, Dooley wore a striking red sports coat that was given to him when he retired as Georgia's athletic director in 2004. He's only worn it a handful of times but figured this occasion was as good an occasion as any to break it out again.

"Do you like the coat?" he asked reporters during an impromptu news conference in the bowels of Sanford Stadium. "It feels great. Does it fit all right?"

Brown's 1975 novelty song "Dooley's Junkyard Dogs" was played during the ceremony, which had Barbara clapping her hands jubilantly while her more reserved husband swayed a bit and pointed his fingers along with the catchy number.

The Godfather of Soul was a huge Georgia fan and recorded the song to honor one of Dooley's most ferocious defenses. It has been a popular tune between the hedges ever since.

"It was a great experience and a moving day," Dooley said. "I'm thankful for all the people that were a part of making it happen, and all the people that shared in this, which is the greatest thrill. The players, family, cheerleaders, the band, the managers, the trainers, some very special people of the Bulldog nation."

Dooley said he was most moved by the presence of his former players. They all had a get-together with their former coach the previous evening, giving them a chance to show how much he meant to their lives.

"Last night was just a great and wonderful homecoming," Dooley said. "They were all hugging each other and hugging me and I was hugging them. It was a love affair."

Dooley was an assistant at rival Auburn when he was hired by the Bulldogs for his first head coaching job at age 31.

He noted that it wasn't a popular decision — especially when Georgia fans realized that their new coach with the first name Vince was not Vince Lombardi.

"I can't say that I was the most well-received coach who has ever been hired," Dooley said, chuckling. "When I look at those credentials, there's no way as an administrator that I would've hired myself. A 31-year-old freshman coach at a rival school? Now suppose you had to hire somebody at an institution like Georgia and say this is the coach."

It worked out just fine.

Dooley won six Southeastern Conference titles and the 1980 national championship before his retirement after the 1988 season. He stayed on as athletic director for another 16 years until an acrimonious departure forced by then-university President Michael Adams.

Dooley's supporters pushed for years for his name to go on Sanford Stadium in some fashion, but it took far longer than many expected. Finally, current President Jere Morehead pushed through a proposal in May add Dooley's name to the field of the 95,000-seat facility, which has been the Bulldogs' home since 1929.

Dooley said he appreciated the honor, but will be glad when the attention returns to Georgia's No. 3-ranked football team.

"I told some friends it's all been great, but I'll be glad when it's over," he said. "I'll be fading away in the sun in my garden."