What’s old is new again as No. 4 Georgia opens at Arkansas 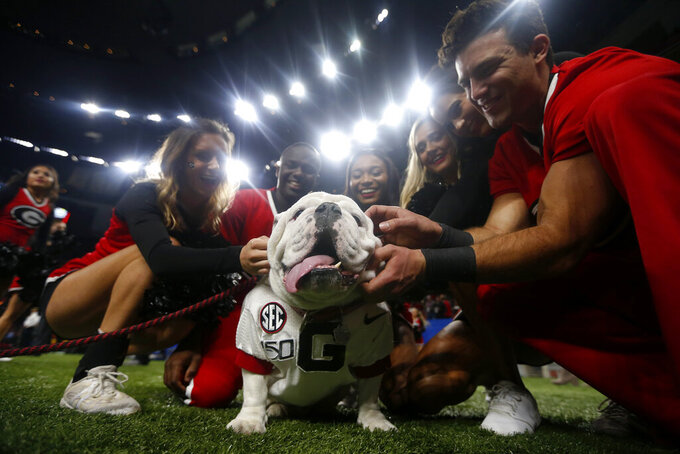 Georgia cheerleaders pose with the school mascot "Uga" before the Sugar Bowl NCAA college football game against Baylor in New Orleans, Wednesday, Jan. 1, 2020. Football is being played in the Power Five conferences, but many of the longstanding traditions that go along with the games are on hold during the pandemic. Georgia's white English bulldog Uga and other live animal mascots won't be in SEC stadiums because of the conference's precautions against coronavirus. (AP Photo/Brett Duke, file)

FAYETTEVILLE, Ark. (AP) — A nearly month-long postponement to the start of college football in the Southeastern Conference may feel different, but it won’t look much different.

The Bulldogs are No. 4 in the nation. The Razorbacks are not anywhere near that, having not beaten a fellow SEC member since October 2017 (Ole Miss). Georgia has hopes of a championship. Arkansas has hopes to win a game.

Their mutual commonality is Arkansas coach Sam Pittman. An offensive line coach with the Razorbacks from 2013 to 2015, Pittman left to take the same job at Georgia and was hired last December to run things at Arkansas after Chad Morris was fired.

“Going against a very good friend of mine in coach Sam Pittman, who did just an unbelievable job while he was here,” Smart said. “I know he always had a special place in his heart for Arkansas, and he got this opportunity to go back.”

As expected for a team seemingly in a neverending rebuild, the roster is light at Arkansas. Smart doesn't have that issue and, in fact, has multiple options at quarterback.

Southern California transfer J.T. Daniels was expected to take a majority of the snaps this season, but an injury has kept him limited. D’Wan Mathis, a carryover from last year’s team, has shined in the preseason and may provide Smart and the Bulldogs with a two-man look in the opener.

Arkansas is hoping its quarterback problems have subsided after 15 interceptions and two fumbles at the position a year ago. Former Florida quarterback Feliepe Franks’ primary directive from Pittman has been ball security.

“I think he has more confidence in his wideouts that they’re going to run the proper depth, make the break at the proper time,” Pittman said. “He’s throwing the ball very well right now.”

As for the friendship and familiarity between Pittman and Smart, it is a talking point before the game and little else.

Pittman left Georgia on positive terms. Having coached college football full-time since 1991, 2020 is the first year he has had an opportunity to have full control of a program as head coach.

Smart holds no grudges for a live-it, breath-it football guy like his former offensive line coach.

“He helped build the foundation of what we have now,” Smart said.

Georgia has dominated the series with Arkansas since the Razorbacks joined the SEC in 1992, winning eight of 10 matchups and the last loss coming in 2010. Saturday’s game will be the first meeting between the Eastern Division Bulldogs and Western Division Razorbacks since 2014.

Arkansas will rely heavily on Rakeem Boyd, who ran for 1,133 yards for an offense that was ranked 13th in the 14-team SEC. The Bulldogs may not have much issue with that. Georgia led not only the SEC, but all of FBS, last year in rushing defense, allowing just 74.6 yards per game on the ground and the Bulldogs had eight players named to the various preseason All-SEC teams.

SO CLOSE, YET SO FAR

Georgia has been ranked in the preseason Top 25 each of the last 10 years. The Bulldogs have finished a season in the top 10 five of those years. Only once, however, has Georgia made a College Football Playoff. Arkansas is by far the easiest early-season opponent this year as the Bulldogs’ next five opponents are all currently ranked in the Top 25, including three in the top 10.

FOOTBALL IN A PANDEMIC

Capacity at Donald W. Reynolds Razorback Stadium, which can normally hold upwards of 76,000 spectators, will be limited to about 16,000. Pre- and post-game tailgating, a common Saturday tradition, is also not permitted on campus, per state guidelines.