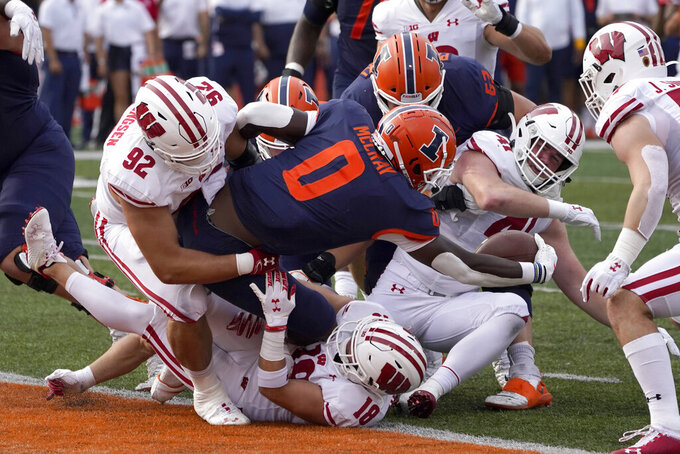 FILE - Illinois running back Joshua McCray sticks the ball over the goal line to avoid a safety as Wisconsin defensive end Matt Henningsen (92) and Collin Wilder (18) make the tackle during the first half of an NCAA college football game Saturday, Oct. 9, 2021, in Champaign, Ill. Across the country, college football teams once again are discovering that establishing a rushing attack is even tougher than it was the year before.(AP Photo/Charles Rex Arbogast, File)

MADISON, Wis. (AP) — Across the country, teams once again are discovering that establishing a rushing attack is even tougher than it was the year before.

Nowhere is this trend more apparent than at No. 20 Wisconsin (No. 18 College Football Playoff ), which has a chance to produce statistically the best season of any FBS run defense in over a decade.

Wisconsin (6-3, 4-2 Big Ten) has won five straight games thanks largely to a defense that allows just 54.7 yards rushing per game – 26 fewer than any other FBS team – and 1.9 yards per carry.

Alabama allowed 2.01 yards per carry during its 2016 national championship season.

“We’re an experienced defense,” Wisconsin nose tackle Keeanu Benton said. “We didn’t lose many people last year. We’ve been playing with a lot of the same people for two to three years now.”

As tough as Wisconsin has been, it’s a bit of an outlier among Power Five teams.

Yards per carry actually are up from last year in three of the Power Five leagues, thanks in part to the fact that teams from those leagues are playing more nonconference games against Group of Five or Championship Subdivision foes than they did in the pandemic-impacted 2020 season.

Average yards per carry are up from 2019 - the last non-pandemic season - in every Power Five league but the Big Ten and SEC.

The big drops have come in the Group of Five, where every league’s yards per rush is down from last year’s season-ending average.

Those averages should increase slightly late in the year now that those Group of Five teams are primarily playing conference games with fewer matchups against Power Five programs. By that same logic, Power Five averages could drop a bit over the next couple of weeks.

“With the extra year of eligibility with the COVID situation, everybody is more mature,” said Brent Brennan, the coach at Mountain West school San Jose State. “You’ve got guys who are stronger, older, have played more football. You’re not having to fit and fill with younger, less experienced players as much as you would in a normal season.”

Group of Five teams figured to benefit most from the NCAA granting an extra year of eligibility because those leagues had fewer players who would leave school early to enter the NFL draft. While the extra year should have helped teams at every position, longtime Air Force coach Troy Calhoun noted that defenses benefited most.

Fifteen of the 16 players who earned first-team or second-team all-Mountain West honors as defensive linemen or linebackers last season are back with their teams this year.

“They're bigger bodies, they're older bodies, they've been in their system longer so the run fits are more exact... and the open-field tackling's a little better also,” Calhoun said. “So you just don't see nearly as many big gains.”

Rahne cited the transfers and other newcomers who have boosted run defenses in his league, but he also believes teams have figured out better ways to defend RPOs (run-pass options) now that they’ve had more time to deal with them.

“Teams have said to themselves, ‘We’re not going to let you just run the ball or just RPO us to death. If you’re going to move the ball, we’re going to make you drop-back pass and so some of those things,’ “ Rahne said. “Some teams have ben able to do that. Obviously in our league Western Kentucky has been very successful at drop-back passing and doing a nice job. So is Marshall.”

Rahne noted that this trend isn’t limited to his conference while praising the team that’s setting the standard at stopping the run.

“Look at Wisconsin’s run defense right now,” Rahne said. “It’s historically good, and it’s been trending that way for a while.”