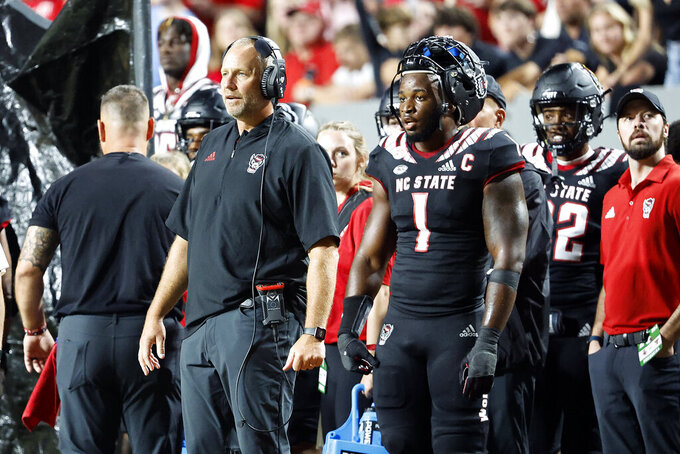 RALEIGH, N.C. (AP) — Aydan White wrapped his hands around an errant fourth-down throw and broke free toward the left side. There was nothing in his way, only a few black jerseys of North Carolina State teammates eager to escort him in an end-zone convoy.

“That's a DB's dream right there,” White said, “just seeing nothing but green."

That 84-yard interception return for a touchdown was the marquee play in a defensive-minded performance that helped the 16th-ranked Wolfpack beat Texas Tech 27-14 on Saturday night. N.C. State finished with four sacks and four takeaways against the Bowl Subdivision’s top passing offense.

“I expect our defense to be a strength,” Wolfpack coach Dave Doeren said. “When you have that many starters back, they should be.”

That unit harassed quarterback Donovan Smith and shut down any ground game the Red Raiders tried to muster. White’s fourth-down pick of Smith’s overthrown second-quarter ball stood out, with White taking the interception down the left side with those three teammates sprinting with him to the end zone.

White also had a second late pick with a minute left as well as a sack on a cornerback blitz for the Wolfpack (3-0). Jakeen Harris came up with his own fourth-down interception near midfield with 8:38 left as Texas Tech (2-1) tried to make a late push after falling behind 20-0.

Smith ran and threw for scores to lead the Red Raiders, as his 3-yard keeper cut the deficit to 27-14. But after Texas Tech forced a three-and-out to get the ball back, Smith fired incomplete on three straight passes before Harris picked him off over the middle to keep the Wolfpack in control.

“We're going to face some good defenses in the Big 12," first-year Red Raiders coach Joey McGuire said. "I think we have to be better in catching all catchable balls, getting vertical when you catch it. We've got to put ourselves in good situations. ... But there's some stuff that we've got to do as a staff to put these guys in better situations.”

Texas Tech: The Red Raiders elevated expectations for McGuire, whose team was picked to finish ninth in the 10-team Big 12 but upset a ranked Houston team last weekend. The defense made things difficult on the Wolfpack. But the team didn't get its offense going until falling behind and lost a muffed punt to go with three picks.

N.C. State: Much of the attention has focused on the presence of preseason Atlantic Coast Conference player of the year Devin Leary at quarterback. But the defense that returned 10 starters from a unit that ranked 14th in FBS in scoring defense (19.7) and 21st in total defense (331.6 yards) carried this win as N.C. State managed 270 total yards. Lineman C.J. Clark had two sacks while the Wolfpack smothered the Red Raiders' rushing game by allowing 54 yards on 26 carries.

The defensive performance against a power-conference opponent might be enough for some voters to lift the Wolfpack in their AP Top 25 ballots.

N.C. State had its own offensive troubles, including stalled drives and a penalty wiping out a trick-play touchdown in the first quarter.

And then there was Demie Sumo-Karngbaye's huge mistake late in the third quarter. He lost a sure TD catch when he was stripped near the goal line and fumbled out of the end zone.

Doeren sought out the second-year running back afterward and challenged him.

“I found him on the bench,” Doeren said. “He had his head down. I told him to look me in the eyes, and said: ‘You need to make up for that. You’re going to get a chance.'"

On the Wolfpack's next offensive snap, Sumo-Karngbaye scored his second TD of the night on a 38-yard catch off a trick-play pass from Thayer Thomas for a 27-7 lead early in the fourth.

“I really appreciate (Doeren) for just giving me the opportunity once gain after something so bad like that happened,” he said.

Texas Tech linebacker Bryce Ramirez was carted off in the first quarter with a serious leg injury.

He was injured when teammates tackled Wolfpack running back Jordan Houston, with the pile rolling over Ramirez’s left leg that was planted in the turf.

The leg was twisted abnormally as he laid on the grass, with team training staffers using a towel to cover the lower left leg as they began treating him. He was later taken to a hospital trauma center.

Texas Tech: The Red Raiders host No. 21 Texas in their Big 12 opener next weekend.