White, No. 18 Memphis take show on road to South Florida 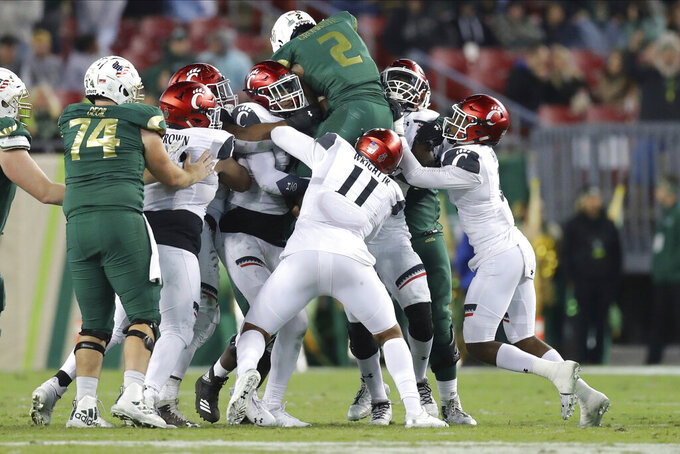 South Florida running back Jordan Cronkrite is tackled by Cincinnati during the first half of an NCAA college football game, Saturday, Nov. 16, 2019, in Tampa, Fla. (AP Photo/Mike Carlson)

TAMPA, Fla. (AP) — Brady White is playing the best football of his career and taking No. 18 Memphis along for the ride.

The graduate transfer quarterback’s elevated play has been one of the keys to a four-game winning streak that has his team in a three-way tie atop the American Athletic Conference West Division standings and in a position to get to the AAC championship game for the third straight season.

The Tigers (9-1, 5-1, No. 18 CFP) can move a step closer when they visit South Florida (4-6, 2-4) on Saturday. A win over the Bulls, plus a victory in next week’s regular-season finale against No. 17 Cincinnati will send Memphis to the title game again.

“There hasn't been just a night and day change in him. He's playing at a high level,” coach Mike Norvell said. “He's completing the (passes). We're pushing the ball down the field, we're maximizing those opportunities.”

Booed at home when the offense sputtered early in a game Memphis rallied to win against Navy, White has also been resilient in helping the Tigers rebound from their only loss of season at Temple. The redshirt junior who began his career at Arizona State has thrown just one interception since Oct. 12, a stretch of four victories over Tulane, Tulsa, SMU and Houston.

“I think Brady has played at a high level throughout the season. He had the first half at Navy (where he) made some mistakes, had the first couple plays there in the Temple game where we had some turnovers that cost us,” Norvell said. “But we're fortunate. We've got one of the best quarterbacks in the country playing here for the Memphis Tigers.”

USF is coming off a 20-17 loss to Cincinnati, which has already clinched the East Division title and is the only team that’s unbeaten in conference play.

The Bulls led the Bearcats for most of the game, but missed four field goals, including a potential game-winner in the closing minutes. Cincinnati prevailed with a field goal as time expired.

“If you look at this defense, especially the last two or three weeks, it has played very well,” USF coach Charlie Strong said.

USF bounced back from a 1-3 start to climb within striking distance of bowl eligibility. The Bulls have lost two straight and have to close with wins over Memphis and UCF to accomplish that goal.

If the Bulls are going pull off the upset, they likely will need big days from quarterback Jordan McCloud and running Jordan Cronkrite. McCloud threw for 267 yards and one touchdown against Cincinnati, while Cronkrite has rushed for 687 yards and four TDs, with most of the production coming after the team’s 1-3 start.

The Tigers have held five opponents to 25 points or less, something they managed only six times all last season. That is why Memphis is allowing just an average of 25.9 points a game, which is best in Norvell's four seasons. That's down from 31.9 points allowed points last season. The Tigers also have held three opponents under 100 yards rushing, including each of the past two games.