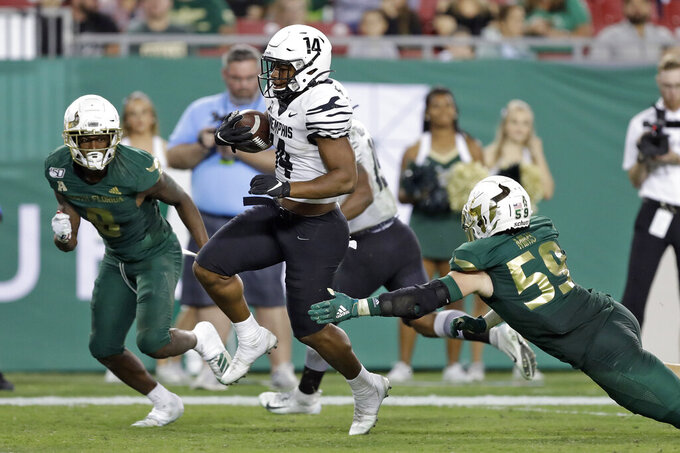 TAMPA, Fla. (AP) — One more win and No. 18 Memphis will get another crack at playing for the American Athletic Conference championship.

The Tigers shrugged off a slow start to beat South Florida 49-10 Saturday and move a step closer to another AAC West division crown and a third consecutive berth in the league title game.

Memphis (10-1, 6-1), which has won five straight since their only loss at Temple, retained a share of first place with Navy and will win the West with a home win over No. 17 Cincinnati next week.

"I have yet to use the word championship at all this year, not since January,” coach Mike Norvell said. “I got to say it in that locker room because we put ourselves in a position now if we can go to take care of our business next week, which is going to be an unbelievable challenge.’’

Brady White threw for 222 yards and two touchdowns, and the Tigers shrugged off two early turnovers to score 42 consecutive points to finish the blowout before an announced crowd of 25,136 that included a gray cat that ran onto the field after Antonio Gibson scored on an 18-yard run to make it 35-10 with just under seven minutes left in the third quarter.

The ensuing kickoff was delayed less than a minute while the cat darted around, searching for an escape route. It finally took off through an open area behind the USF bench.

White was intercepted twice in the first half when USF (4-7, 2-5) led 10-7. The graduate transfer settled in and took control of the game with help from a bevy of playmakers.

Memphis rushed for 325 yards, with Patrick Taylor gaining 95 on 17 attempts and scoring on runs of 3, 5 and 10 yards. Leading rusher Kenneth Gainwell averaged 9 yards a carry and finished with 128, with most of his production coming while the Tigers were building a 28-10 halftime lead.

White completed 18 of 22 passes, including second-quarter TDs of 50 yards to Kedarian Jones and 23 yards to Damonte Coxie. He only threw once after halftime, leaving the game late in the third quarter after Gibson and Taylor ran for scores that increased the lead to 42-10.

“Obviously, we all aspire to want to be able to lift a trophy, but you've got to put yourself in that position,” Norvell said. “These guys have done that, but we have one more huge step we to have to take, and it's going to be an unbelievable challenge against a great opponent.’’

USF, playing without injured running back Jordan Cronkrite, sputtered offensively after rushing for 67 yards on its first drive to take a 7-0 lead. Dave Small scored on a 1-yard run. Kelley Joiner led the Bulls with 115 yards rushing on 13 attempts.

With the loss, USF’s streak of four consecutive bowl appearances comes to an end.

“You got to give their team credit. We didn't play well,” USF coach Charlie Strong said. “When you go out there and we play a good team like Memphis, we knew that all three phases had to play together, just knowing who they are, what they've done and how they've played the whole season.’’

Memphis: The offense outgained USF 560 yards to 170, including a 325-126 edge on the ground. The defense was dominating, too, after yielding a 75-yard TD drive to begin the game. USF managed just 44 yards the rest of the first half, with 22 of that coming on the last play. The Tigers cruised after minimizing the damage after White interceptions, holding the Bulls to three points off the turnovers.

South Florida: The Bulls have lost three straight after playing their way into a position to become bowl eligible following a 1-3 start. They fell to 11-27 against teams ranked in the Top 25, including 0-6 under Strong, who is 21-15 in three seasons at USF.

The Tigers are 18th in the latest CFP rankings. Saturday’s victory leaves them in a position to overtake Cincinnati (No. 17 CFP) as the highest rated Group of Five team if they can beat the Bearcats next week. Of course, that would also ensure a rematch between the teams in the AAC championship game the following week. Memphis remained tied with Navy for first in the AAC West. The Tigers hold the tiebreaker because they beat the Midshipmen 35-23 on Sept. 26.

Memphis: Host No. 17 Cincinnati next Friday.

South Florida: Close the season at UCF on Friday night.