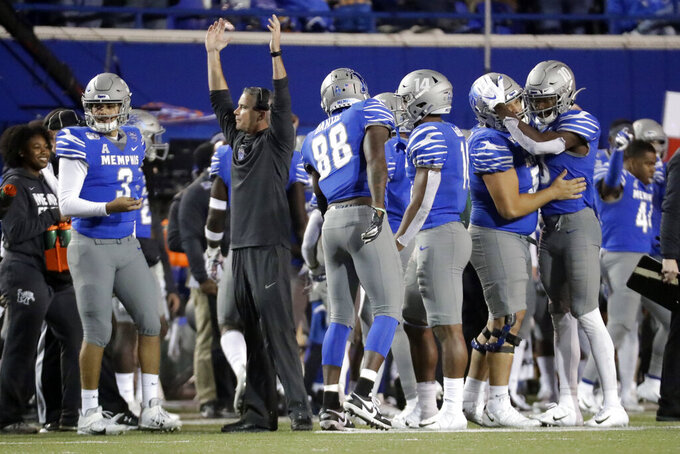 Memphis coach Mike Norvell celebrates along with players on the sideline late in the fourth quarter of the team's NCAA college football game against SMU on Saturday, Nov. 2, 2019, in Memphis, Tenn. Memphis won 54-48. (AP Photo/Mark Humphrey)

MEMPHIS, Tenn. (AP) — The 24th-ranked Memphis Tigers had a national stage both in their town and on their field.

They lived up to the moment.

Brady White threw for 350 yards and three touchdowns, Antonio Gibson had a school-record 386 all-purpose yards with three scores and Memphis held off No. 15 SMU 54-48 Saturday night to cap the biggest day yet in Tigers' football history.

"This stage, this moment, this opportunity, they came out and they played with everything they had against a really good football team," Memphis coach Mike Norvell said.

The Tigers (8-1, 4-1) handed SMU its first loss of the season and moved atop the American Athletic Conference's Western Division to improve their case to represent the Group of Five in the New Year's Six.

SMU (8-1, 4-1) came in with its best start to a season since 1982 when the Mustangs won their first 10. They left having lost their sixth straight in Memphis in a series dominated by the Tigers, and coach Sonny Dykes said they just made too many errors against a good team.

"You know, 48 points is usually enough to win," Dykes said.

Memphis started the day on display thanks to ESPN's "College GameDay" on Beale Street with wrestler Jerry Lawler as the big guest, then filled the Liberty Bowl with 59,506 for the biggest crowd for an American conference game. The Tigers followed by outdueling the nation's sixth-best scoring offense, which had been averaging 43 points a game.

"The momentum swings, there were highs, there were lows," Norvell said. "There was a great response from our Memphis Tigers. I want to say thank you to Memphis. Memphis had an opportunity to be showcased, and much like this football team, it rose to the occasion."

The teams combined for 1,067 yards total offense, and SMU stayed close scoring three TDs in the fourth quarter going for 2 after each — converting all three. Shane Buechele threw a 2-yard TD pass to James Proche with 2:06 left for the final margin.

But Preston Brady recovered SMU's onside kick, and Memphis ran out the clock for the victory.

White said the Tigers understood the special platform they had with the prime-time game on network television.

"We appreciated the opportunity and just wanted to make sure we took advantage of it and put our best foot forward and kind of we fed off that energy a little bit," White said.

Gibson caught six passes for 130 yards and a TD, and he also returned a kickoff 97 yards to open the third. The senior wide receiver padded Memphis' lead, taking a handoff 78 yards for a TD with 9:31 left to give him 386 all-purpose yards for a Memphis record. Damonte Coxie caught seven passes for 143 yards and two TDs.

The Tigers lost at Temple after entering the Top 25 in October. This victory ensures they will stick around and likely move up a bit. SMU hadn't been ranked this highly since being No. 3 in October 1985, and the Mustangs will drop after this loss.

SMU came in having forced 17 turnovers this season and at least one in 19 straight games, but the second-longest active streak in the nation ended against Memphis.

SMU: The Mustangs played without their leading receiver in Reggie Roberson who is ranked eighth in the nation with 803 yards receiving. Roberson didn't travel with SMU after hurting his foot early in a win against Houston on Oct. 24. James Proche came through with 13 catches for 149 yards, and Rashee Rice caught seven for 122 yards.

Memphis: Riley Patterson had a career-high 17 points and bailed the Tigers out with four field goals after Memphis had three touchdowns wiped out. Gibson was ruled short of the goal line in the first quarter, and the Tigers later turned the ball over on downs. A 75-yard kickoff return by Joey Magnifico was erased by an illegal block in the back, and a hold negated Kenny Gainwell's second TD run, a 13-yarder, just before halftime.

"There's a play here and there, that if we make them, it's a different outcome," Dykes said.

Memphis: A little rest with an open date, and then the Tigers visit Houston on Nov. 16.