Who will challenge Tagovailoa for Heisman Trophy in 2019? 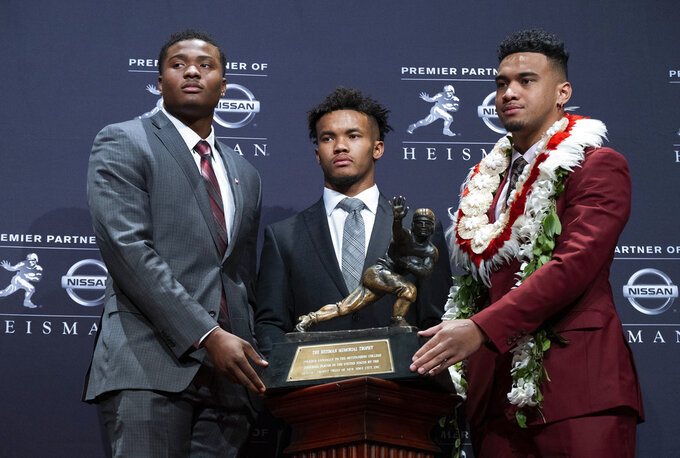 Tua Tagovailoa will be the odds-on favorite to win the Heisman Trophy next season after the Alabama quarterback had to settle for second to Oklahoma's Kyler Murray.

Murray is heading for professional baseball next year and Ohio State quarterback Dwayne Haskins, the other Heisman finalist on Saturday night, could very well enter the NFL draft. Assuming Haskins does go pro, along with a few other high-profile quarterbacks such as Oregon's Justin Herbert and Michigan's Shea Patterson, who else can challenge Tagovailoa?

Note: UCF quarterback McKenzie Milton would have made this list if not for a severe leg injury that makes his return to the field uncertain.

The strong-armed passer with the flowing blond hair became the Tigers' starter four games into his freshman season and has been one of the best quarterbacks in the country since. Lawrence enters the College Football Playoff with 2,606 yards passing, 24 touchdown passes and only four interceptions. Clemson leaned on the running game and tailback Travis Etienne (1,463 yards rushing and 22 touchdowns) at times this season to take the pressure off Lawrence. Etienne is back next season, too, but expect the Tigers to let Lawrence loose and the results to be spectacular.

Fromm got overlooked this season, with Tagovailoa, Haskins and Murray putting up crazy stats. But the Bulldogs' sophomore threw 27 touchdowns and was third behind Tagovailoa and Murray in efficiency rating at 175.81. He'll be a third-year starter for a preseason top-five team in 2019 — if he can hold off Justin Fields, the five-star freshman who served as his backup this season. And Georgia's offense could flow through running back D'Andre Swift no matter who plays quarterback.

Tagovailoa's backup at Alabama is almost certain to transfer in the offseason after having graduated. That means he can play immediately next season. He'll be college football's most prized free agent, a former Southeastern Conference player of the year. Where he lands will help determine his Heisman hopes. Let's speculate. Oregon is coached by former Alabama assistant Mario Crisotbal and the Ducks could be looking for a quarterback if Herbert departs. Or how about Hurts at Oklahoma, trying to become the third straight Oklahoma quarterback to win the Heisman?

With a bowl game still to play, Taylor has rushed for 3,966 yards through his sophomore season, an NCAA record previously held by Wisconsin Heisman winner Ron Dayne. The Badgers disappointed in 2018, starting in the top five and going 7-5. That killed Taylor's Heisman hopes. The Heisman has become a quarterback's award, but If the Badgers bounce back in 2019, Taylor can make a run.

Daniels flashed five-star talent as a freshman starter for the Trojans, who stumbled to a 5-7 season. He will have a new offensive coordinator next year in former Texas Tech coach Kliff Kingsbury, who has a history of developing highly productive quarterbacks — including 2012 Heisman winner Johnny Manziel at Texas A&M.

The sophomore has a little Tim Tebow in his game, passing for 3,127 yards and 25 touchdowns and rushing for 541 and 13. If the Longhorns take another step forward and can overtake the Sooners in the Big 12, it would likely mean Ehlinger has stepped up, too. Though he could be losing two NFL-quality receivers in juniors Collin Johnson and Lil'Jordan Humphrey.