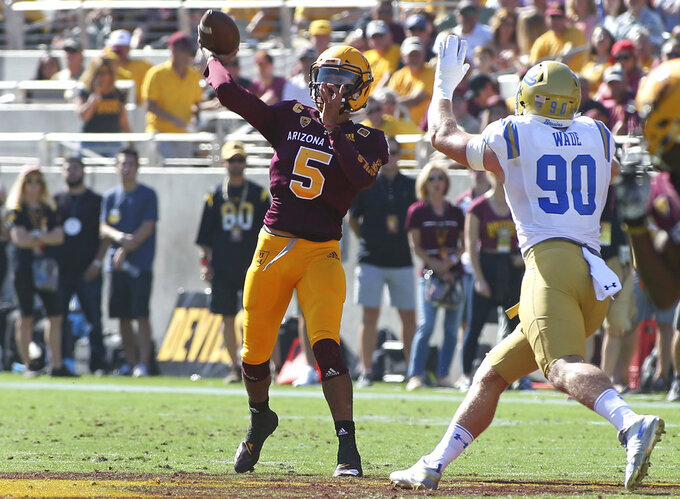 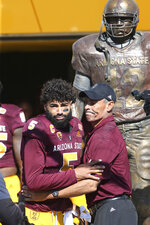 TEMPE, Ariz. (AP) — Arizona State quarterback Manny Wilkins emerged from an emotional Saturday with a victory that keeps his team in great shape in the crowded Pac-12 South.

The three-year starter, in his final home game, ran for two touchdowns and threw for another and the Sun Devils held off UCLA 31-28.

Eno Benjamin carried it a career-high 34 times for 182 yards and a score for the Sun Devils (6-4, 4-3), who won their third straight — all over Pac-12 South foes — and became bowl eligible under first-year coach Herm Edwards.

"We didn't tackle him," UCLA coach Chip Kelly said of the Arizona State running back. "Too many times the contact was six or seven yards down the field."

Wilkins' voice was choked with emotion when he spoke at the postgame news conference.

"I'm ecstatic, blessed to be a part of this football team," he said. "We just stayed the course. They knew what we were going to run, we knew what they were going to run. It's all about who wants it more. I think you could see the look in our eyes. Want sure wanted it and we still want it. We've got two more (games)."

UCLA (2-8, 2-5) lost its third straight but stayed with the Sun Devils throughout the game.

"I had a feeling it was going to go down to the wire," Edwards said. "They have a very productive offense and we couldn't slow them down."

Wilton Speight, starting over freshman Dorian Thompson-Robinson at quarterback for the Bruins, completed 26 of 35 yards and two touchdowns, both to tight end Caleb Wilson, who had 11 catches for 164 yards.

Wilkins completed 16 of 22 for 199 yards and a touchdown but had an interception returned for a score. He rushed for 60 yards in 14 carries. N'Keal Harry, most likely in his final home game since he's expected to leave for the NFL, had seven catches for 100 yards.

"A lot of things went wrong," Edwards said, "but I think our guys are starting to mature and just hang in there and keep fighting because that's what football's all about."

"Credit to the fans of Arizona State for making it a hostile environment," Speight said, "especially on that last drive."

UCLA took the lead for the last time at 14-10 when Darnay Holmes picked off Wilkins' pass and returned it 31 yards for a touchdown with 4:36 left in the first half.

But the Sun Devils responded with a 10-play, 75-yard scoring drive, Wilkins throwing a 5-yard touchdown pass to fullback Nick Ralston with 58 seconds left in the half to put Arizona State back on top 17-14.

In the third quarter, the Bruins were driving for what would have been the go-ahead score when Speight's pass was deflected and intercepted by Chase Lucas at the Sun Devils 24. Benjamin proceeded to rush for 74 yards — 41 on his first carry — in a 76-yard TD driving, scoring from the 1 on fourth down to put Arizona State up 24-14.

But the Bruins came right back and Speight's 33-yard touchdown pass to Wilson cut it to 24-21 with 6:13 left in the third quarter.

UCLA finishes a tough first season under Chip Kelly with a pair of home games against USC and Stanford. But the Bruins offense has been impressive the past two weeks.

Arizona State can win the Pac-12 South by winning out against Oregon next week and Arizona.