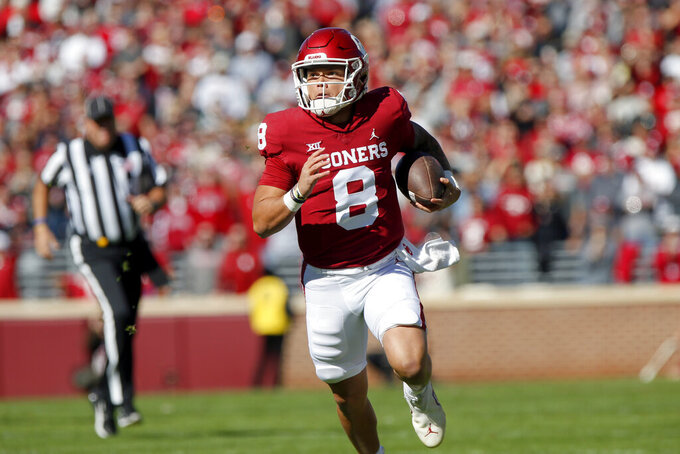 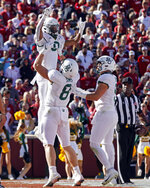 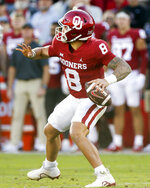 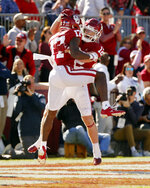 Williams, a fifth-year junior, had rushed for 456 yards his entire injury-plagued career before exploding against the Sooners. His top performance this season had been 68 yards rushing against BYU.

“I’ve faced a lot of adversity in my career, and injuries come with the game, and I’m willing to take the risk to keep going out there and doing what I can to help this team win," he said.

Williams — a 5-foot-9, 168-pound speedster — had 25 carries on Saturday after missing the previous two games. He was more concerned about the team's win than his big day.

“That’s a great feeling," he said. "We’re bowl eligible now, but that’s not where we’re stopping. We’re still in the running for the Big 12 championship, and that’s what we’re looking forward to. Taking it one game at a time.”

In all, the Bears (6-3, 4-2 Big 12) ran for 281 yards and five touchdowns to claim their third straight win. It was Baylor's fifth victory ever against the Sooners in 33 tries, and just the second time the Bears have won in Norman.

Oklahoma's Dillon Gabriel passed for 261 yards and two touchdowns and ran nine times for 70 yards and another score. But he threw three interceptions — all in the first half — after just throwing one all season before Saturday's game.

“Throwing it late over the middle a couple times – we can’t do that," Oklahoma coach Brent Venables said. "Baylor’s a good, disciplined football team and they took advantage of some bad decisions.”

Eric Gray rushed for 106 yards and two touchdowns and caught eight passes for 58 yards for the Sooners (5-4, 2-4), who had won two straight.

“We just weren’t good enough today,” Venables said. “The discipline, the physicality when we had to get a stop and stop the run or convert, taking care of the football. ... We just didn’t play complementary football today.”

Despite Gabriel's mistakes, Baylor led just 24-21 at the break because the Sooners gained 334 yards in the first half.

Baylor ran out the clock on the next possession. Williams iced the game with a 43-yard run on a third-and-3 at the 50. He could have scored, but he went down so the Bears could run out the clock.

“Understanding the situation and understanding not to score in that last minute and give OU the ball back was the smartest play in mind,” Williams said.

Baylor: The Bears pulled off the win, despite getting just 132 yards passing out of Blake Shapen and just seven yards on four carries from freshman phenom Richard Reese. They could work their way back into the next Top 25 after spending most of the early part of the season there.

Oklahoma: The Sooners gained 499 yards and basically moved the ball at will, but turned the ball over too many times. The defense struggled with tackling throughout and couldn't get the critical stop it needed late.

Gray rushed for at least 100 yards for the sixth time this season. For the season, he has rushed for 902 yards and eight touchdowns. His eight catches against Baylor matched a career high he set back in 2020 against Georgia while he still was at Tennessee.

“Eric did today what he’s done all year,” Venables said. “Whatever we’ve asked him to do. He’s as consistent a player as we’ve had. He ran with toughness and he’s always straining.”

Venables: “We’ve been talking about discipline for 11 months … We’ve got to be more disciplined.”