Williams runs for 2 TDs, No. 2 Ohio St gets by Northwestern 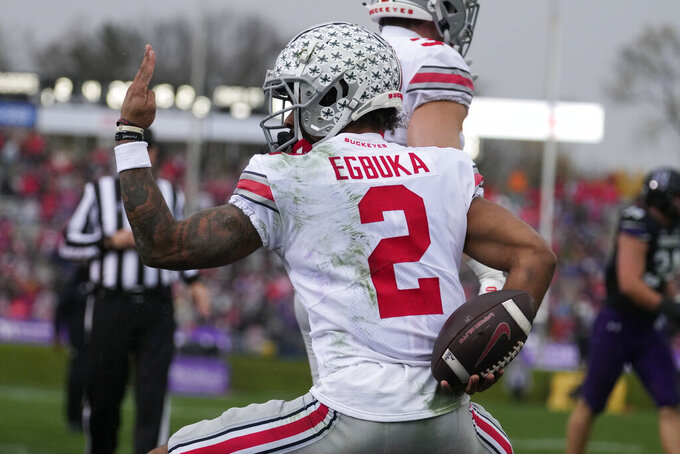 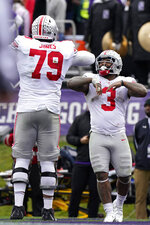 EVANSTON, Ill. (AP) — Ryan Day was more than willing to take the win and move on from this one. The way the wind was blowing and rain was falling, it was hard to blame the coach.

Miyan Williams ran for 111 yards and two touchdowns, and No. 2 Ohio State overcame the ugly weather and a stiff challenge from Northwestern to win 21-7 on Saturday.

The Buckeyes (9-0, 6-0 Big Ten, No. 2 CFP) came in tied with Tennessee in the AP poll and trailing only the Volunteers in the season’s first College Football Playoff rankings. But what figured to be an easy win turned into a struggle.

The heavy rain that fell at times and gusting winds that blew passes off course all afternoon helped make it that way. Northwestern's physical play, particularly in the early going, only added to the difficulties.

“I've never been around conditions like this,” Day said. “It must have been 30-mile-an-hour winds. And if you've ever tried to golf in 30-mile-an-hour winds, it's hard to get off the tee, (let alone) throw a football. We saw this coming, so we had a plan. ... There were times I was concerned about the snap coming back.”

The Buckeyes didn't score until the closing minutes of the first half, when Emeka Egbuka ran it in from the 15.

Williams gave Ohio State the lead with a 27-yard touchdown in the third quarter and celebrated by making snow angels in the grass. He made it 21-7 when he scored from the 2 with about 4 1/2 minutes remaining in the game after C.J. Stroud broke a 44-yard run, and the Buckeyes came away with a tougher-than-expected win.

Stroud, the Big Ten leader in yards passing, set a career low with 76. He completed just 10 of 26 passes in his only game this year without a touchdown throw. But he ran for 79 yards, a big number particularly for a quarterback with minus-4 yards rushing coming in.

“We had to find another way to win,” Stroud said. “I’m like that every game, where I tell coach run me if he wants to, or if he doesn’t it’s up to him.”

The Buckeyes set by far a season low with 283 yards and matched one in scoring. But they made enough plays to pick up their 10th consecutive win against Northwestern and 34th in the past 35 meetings.

The Wildcats (1-8, 1-5) dropped their eighth straight, matching their worst skid since the 1998 team lost eight in a row. They are 5-17 since falling to Ohio State in the 2020 conference championship game.

“A lot of good happened today,” coach Pat Fitzgerald said. “Unfortunately, the bad is the outcome on the scoreboard. I thought our staff put together a really good plan to be prepared for the elements, and I think we pretty much executed it except for a couple plays. Those ended up being the difference in the game.”

Evan Hull ran for 122 yards and a touchdown. Brendan Sullivan threw for 79, completing 10 of 14 passes, and Northwestern remained winless since beating Nebraska in Ireland to start the season.

Ohio State came came in averaging 48.9 points — second only to Tennessee — and hadn't scored fewer than 44 in a Big Ten game. But the Buckeyes had a tough time getting going.

Northwestern, which has not beaten a top-five team since knocking off No. 2 Oklahoma and No. 5 Iowa in the first two games of the 1959 season, grabbed a 7-0 lead midway through the first quarter when Hull took a direct snap and scored from the 16.

Egbuka turned up the right side and scored from the 15 to tie it at 7 with 2:26 left in the half. Stroud kept that drive going with a 16-yard keeper on fourth down at the Northwestern 37.

Williams, who left last week's game at Penn State early with an injury, gave Ohio State the lead with 8:44 left when he bounced off a pack, turned to the right and beat three or four defenders for his 27-yard TD. He put this one away with his short score run in the fourth.

Though the Buckeyes remained unbeaten, they could drop a spot or two

Ohio State: The Buckeyes asserted themselves more as the game wore on after getting pushed around in the first half and found a way to pull out a difficult game.

Northwestern: Though they hung in against one of the Big Ten's powerhouses, the Wildcats continue their slide.

Ohio State: The Buckeyes have a home game against Indiana next week and visit Maryland before a showdown with No. 4 Michigan in Columbus on Nov. 26.

Northwestern: The Wildcats will try to stop their skid when they visit Minnesota.