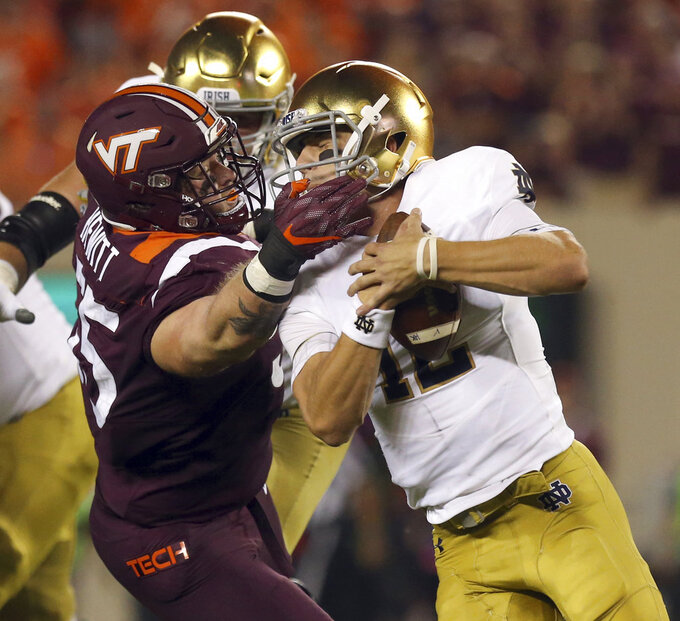 BLACKSBURG, Va. (AP) — Dexter Williams ran for three touchdowns, including a 97-yarder, and No. 6 Notre Dame beat No. 24 Virginia Tech 45-23 on Saturday night.

The Irish (6-0) had minus-5 rushing yards and were facing second-and-12 from their own 3 when Williams took a handoff into the left side of the line and broke into the clear early in the third quarter, putting Notre Dame ahead 24-16. Williams had just been thrown for a 2-yard loss, prompting the sellout crowd at Lane Stadium to grow louder, begging for the kind of big play the program's defense has made so often. Instead, it was Williams who made it. He added TD runs of 1 and 31 yards.

The Irish's defense was stout, too. Khalid Kareem stripped quarterback Ryan Willis on a scramble and Julian Love was in perfect position to scoop up the bouncing fumble and take it 42 yards for a touchdown, giving Notre Dame a 17-9 lead late in the second quarter. Before breaking the game open, Notre Dame also sacked Willis for 11 yards after Virginia Tech (3-2) drove to the 19, and stopped the Hokies on three tries from the 1 yard-line. Both of those drives ended with the hosts settling for field goals by Brian Johnson.

Ian Book started fast and then struggled, but delivered the back-breaker for the Irish. Flushed left and surrounded by three closing defenders, he tossed a short pass just beyond them to Miles Boykin, whose 40-yard touchdown made it 31-16 late in the third quarter. The pair later connected for a 5-yard TD as the Irish scored the first 21 points of the second half.

Book finished 25 for 35 for 271 yards in his third consecutive start. Willis was 31 for 52 for 309 yards with two TDs and one interception for the Hokies.

Notre Dame: Book was perfect on the opening drive, completing all seven of his throws for 58 yards. He was far less effective throwing the ball downfield. He badly overthrew Chris Finke twice, including once when Finke was well behind Tyree Rodgers and could have coasted into the end zone.

Virginia Tech: The Hokies' lack of defensive depth is catching up with them. They were without starting free safety Divine Deablo, who the school said was not medically cleared to play, forcing Rodgers into extended action. Defensive coordinator Bud Foster has had to replace eight starters, plus Deablo, since last season.

The Irish enhanced their playoff aspirations by winning in a difficult place while No. 5 LSU, No. 7 Oklahoma and No. 8 Auburn all lost. Virginia Tech is likely to drop out of the rankings again, but could well figure in the ACC's Coastal Division mix before the season is over.

The Hokies are at North Carolina next Saturday before playing four of their last five at home.