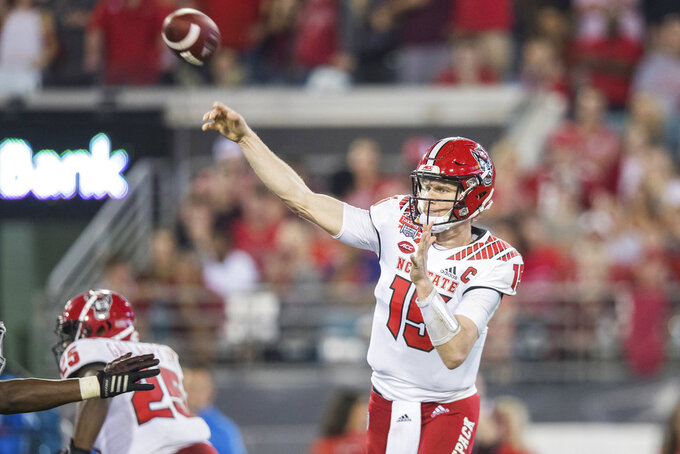 He posed for pictures, hugged teammates and friends, and blew kisses to the crowd.

Williams ran for 236 yards and three touchdowns, smashing a 30-year-old school record and carrying No. 21 Texas A&M to a 52-13 victory against North Carolina State in the Gator Bowl on Monday night.

The Aggies (No. 19 CFP) ended 2018 with a four-game winning streak and broke a three-game postseason skid. It was the first bowl victory for most of Texas A&M's roster, including Williams.

It also capped an impressive inaugural season for coach Jimbo Fisher in Aggieland.

"The most important thing is we got that bowl win, that bowl win that we've been missing out on the last four or five seasons," Williams said. "We got that. We're definitely molding and showing this program is going in a new direction."

Williams earned MVP honors, a potential final curtain call for his college career. The junior is expected to leave school early and enter the NFL draft.

He said afterward he's still contemplating his future, but no one could blame him for turning pro after the way he closed out the season.

Williams ran for 829 yards and eight scores during Texas A&M's final four games, all wins. His performance against the Wolfpack gave him 1,760 yards for the season, topping Darren Lewis' previous Texas A&M mark of 1,692 set in 1988.

Williams had 61 yards rushing in the first half and then got rolling in the third quarter. He carried five times for 82 yards on one drive, including a 17-yard touchdown run . He topped that with a 93-yard scoring run on Texas A&M's ensuing drive.

His longest scamper broke the previous Gator Bowl record of 216 yards rushing set by Syracuse's Floyd Little in 1966 against Tennessee.

"It was a special moment," Williams said.

Texas A&M's Kellen Mond completed 14 of 26 passes for 140 yards, with a touchdown and an interception. Mond also ran five times for 85 yards and a score. Kendrick Rogers made a leaping, 6-yard catch in the back of the end zone to help Mond.

Little went right for the Wolfpack, which was trying to get to double-digit wins for the second time in school history. North Carolina State finished with 273 yards and went 0 for 13 on third down.

Ryan Finley, a senior playing his final game, completed 19 of 32 passes for 139 yards. He threw a touchdown passes and two interceptions. Tyrel Dodson returned one of the picks 78 yards for a score early in the third quarter, a play that turned a close game into a two-touchdown advantage.

Finley also was sacked twice before getting pulled in the fourth quarter. Doeren clearly wanted to protect Finley, who's expected to be an early round pick in the NFL draft in April.

It certainly didn't help that NC State played without two of its best players, including the team's leading tackler. Receiver Kelvin Harmon and linebacker Germaine Pratt skipped the bowl to protect their NFL draft stocks.

It's unlikely Pratt could have done enough to make a difference against Williams, who averaged 12.4 yards on 19 carries against a defense that allowed 109.1 yards a game all season.

"You give him enough touches, great things are going to happen in every phase of the game," Fisher said. "That's what great players do."

North Carolina State: The Wolfpack failed to get a third straight postseason win. It was a disappointing finale after ending the regular season with three consecutive wins, but still proof that Doeren has the program headed in the right direction.

Texas A&M: The Aggies have one of the youngest rosters in the Southeastern Conference and have enough talent to challenge Alabama in the coming years.

North Carolina State will have to replace Finley, Harmon, Pratt and three starters on one of the nation's best offensive lines.

Texas A&M has one of the county's most challenging schedules in 2019, a slate that includes Alabama and road games against Clemson, Georgia and LSU.