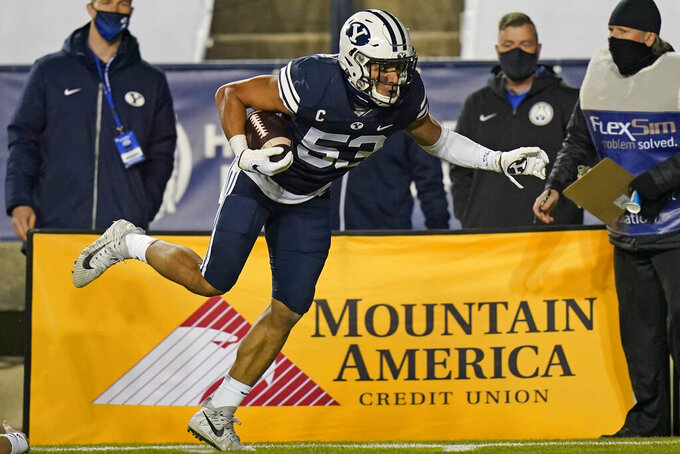 BYU linebacker Isaiah Kaufusi (53) carries the ball after an interception against Texas State in the second half during an NCAA college football game Saturday, Oct. 24, 2020, in Provo, Utah. (AP Photo/Rick Bowmer)

Wilson threw for 287 yards and four touchdowns to lead the No. 12 Cougars to a 52-14 victory over Texas State on Saturday night. He had at least 200 yards passing before halftime for the fourth time in six games, and it was his second consecutive game with at least four TD passes.

“This whole season he’s been killing it,” said tight end Isaac Rex, who led BYU with a career-high 66 yards and two touchdowns on five receptions.

The same could be said for the entire Cougars offense. BYU (6-0) piled up 579 total yards and 30 first downs on its way to matching the team’s best start since 2008. Fourteen players caught a pass and 11 had at least one carry, led by Tyler Allgeier with 77 yards and a touchdown on 12 attempts.

“It’s so fun being around this offense, man,” Rex said. “Our offense is clicking on every cylinder.”

Brady McBride threw for 150 yards and two touchdowns with two interceptions for the Bobcats. Texas State (1-6) fell to 0-9 against AP Top 25 teams after being held to 267 yards.

The Bobcats were the third opponent BYU held under 300 yards this season. They totaled 150 yards over the final three quarters despite forcing a pair of turnovers.

“We did some uncharacteristic things, so we’ve got to clean up,” Texas State coach Jake Spavital said. “We are a young team and we’ve got to keep playing. Eventually things will start going our way if we learn from our mistakes and keep pressing forward.”

McBride completed all five of his passes on Texas State’s opening drive, culminating in a wide-open 19-yard touchdown throw to Marcell Barbee, to briefly put the Bobcats ahead 7-0.

Wilson matched that efficiency on BYU’s opening drive, completing all five of his passes and tacking on a pair of quarterback runs. The second one, a 10-yard sprint, helped set up a 4-yard scoring run by Lopini Katoa that tied it 7-all.

Once Wilson warmed up, he and the rest of the BYU offense did not cool back down. Wilson put the Cougars ahead for good with a 33-yard touchdown pass down the sideline to Keanu Hill to cap BYU’s second drive. The Cougars scored touchdowns on each of their first four drives to open a 28-7 lead.

BYU went 86 yards and 90 yards on its first two scoring drives, giving the Cougars' defense time to figure out how to counter what the Bobcats were doing on offense in the first quarter.

“It was really valuable for us to have that time,” BYU coach Kalani Sitake said. “We needed to make adjustments to our scheme.”

Texas State finally got its first defensive stop when a snap went over Wilson’s head and Hal Vinson recovered the ball at the BYU 10 with 3:54 remaining in the second quarter. Keenan Ellis batted away McBride’s pass in the end zone on fourth down to keep the Bobcats from cashing in on the turnover.

BYU quickly turned the defensive stand into points. Wilson tossed a 45-yard dart to Dax Milne to extend the lead to 35-7 just before halftime.

Texas State: The Bobcats got off to a fast start on offense, but their defense could not slow down BYU long enough to stay in the game past the first quarter. Texas State allowed the Cougars to roll up 384 total yards and 21 first downs before halftime.

BYU: Once again, the Cougars steamrolled over another overmatched opponent. BYU averaged 7.6 yards per play and punted for the first time in the fourth quarter. On defense, the Cougars held Texas State to 13 total yards and 0.9 yards per play in the second quarter to break a close game wide open.

Wilson met little resistance in moving the ball downfield in the first half. One of the few stops, ironically, came courtesy of a teammate.

Junior left tackle Brady Christensen accidentally knocked Wilson to the ground, stopping him for a 1-yard gain at the Bobcats 34 on the second play of the second quarter. It ended up not having a negative impact. The Cougars scored three plays later on an 11-yard run by Allgeier.

“Sometimes stuff like that happens,” Christensen said. “You've just got to laugh about it and move on.”

Late in the fourth quarter, with BYU leading by 35 points, Ryan Rehkow ran a fake punt. With the Cougars facing 4th-and-1 from their own 34-yard line, Rehkow sprinted 49 yards to pick up the first down and set up a 28-yard field goal from Jake Oldroyd.

Sitake seemed embarrassed by the play after the game, chalking it up to a miscommunication between him and the freshman punter. Rehkow had run the same play many times in practice and took off on instinct.

“Personally, I wish he just would have kicked it,” said Sitake, who apologized to Spavital immediately after the game. “That’s on me. I should have been more wise in telling him to just go ahead and punt the ball.”

Barbee’s 20-yard catch in the fourth quarter capped a 96-yard touchdown drive for Texas State. It was the longest scoring drive of the season for the Bobcats and their second one over 90 yards.

Another lopsided win should move BYU to the cusp of the Top 10 in the next AP Top 25 Poll.