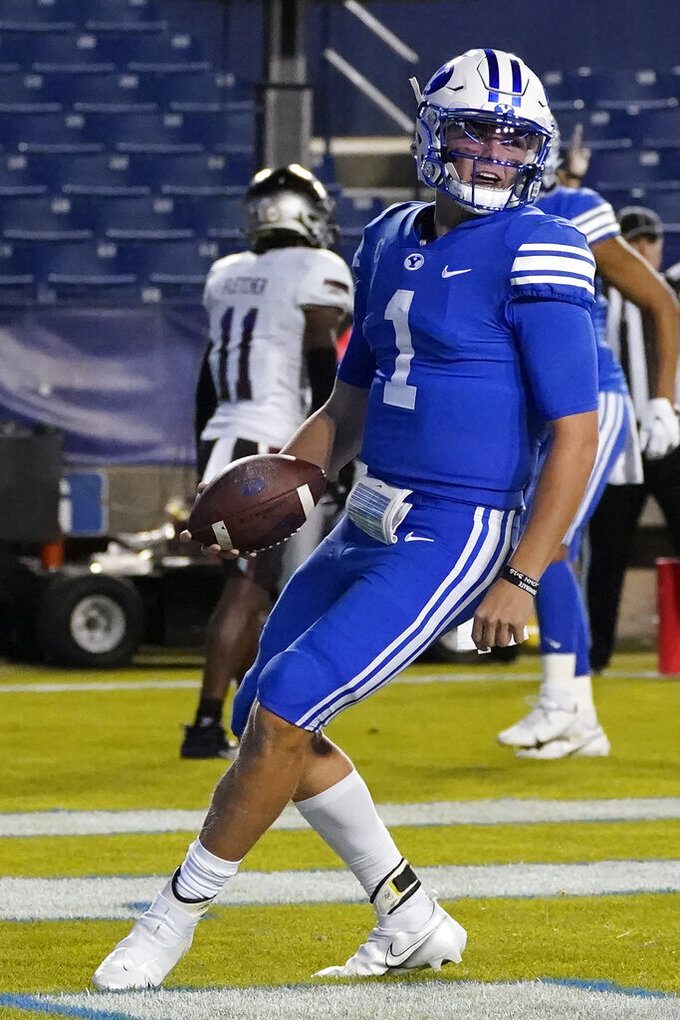 PROVO, Utah (AP) — Zach Wilson threw for a career-high 392 yards and two touchdowns, leading No. 18 BYU to a 48-7 victory over Troy on Saturday night.

Wilson’s previous career high was 317 passing yards against Western Michigan in the 2018 Famous Idaho Potato Bowl. Against Troy, he completed 23 of 28 passes and rushed for a pair of touchdowns while helping the Cougars (2-0) pile up 664 total yards on offense.

It was the most total yards BYU posted against an FBS opponent since recording 681 yards against Houston in 2013. The junior credited his teammates for turning routine plays into something special.

“As a quarterback, I can honestly say a quarterback is always as good as the guys around him,” Wilson said. “I’m fortunate to have a great 10 guys that rally around me. I can make the easy play and they can make it a big play.”

Dax Milne and Gunner Romney combined for more than 250 receiving yards. Milne led BYU with a career-high 140 yards and a touchdown on a career-best seven catches. Romney added a career-high 138 yards on five receptions. They gave the Cougars a pair of 100-yard receivers in the same game for the first time since 2015.

Troy (1-1) simply could not keep up with BYU after the first quarter. Gunnar Wilson threw for 162 yards, but was sacked four times. The Trojans totaled just 181 yards.

“I just like the way our guys played tonight,” BYU coach Kalani Sitake said. “There was a lot of energy and you could feel it from the sideline. I loved the way they responded to the fact no fans were going to (be here.)”

Troy wasted an opportunity to seize a quick lead early in the first quarter. The Trojans got the ball on the BYU 22 after Milne muffed a punt, but could not turn the turnover into points. Payton Wilgar stopped B.J. Smith an inch short of the first down marker on 4th-and-1 from the Cougar 13 to keep the Trojans off the board.

“We just didn’t play good, didn’t coach good,” Troy coach Chip Lindsey said. “Tonight, we were basically dominated in all three phases. We had some opportunities early. We had the turnover, didn’t take advantage of it. Didn’t get it on fourth down.”

BYU scored its first touchdown late in the first quarter by converting a red zone fourth down. Masen Wake punched it in from 1 yard out on a fullback dive on 4th-and-goal, giving the Cougars a 7-0 lead.

A pair of huge catches by Romney facilitated both of BYU’s second quarter touchdowns. The junior receiver hauled in a diving 41-yard catch that set up a 1-yard keeper by Wilson, then gained 52 yards on a catch-and-run to set up a 10-yard scoring grab by Isaac Rex. His big plays helped the Cougars extend their lead to 21-0.

Once BYU’s offense got cooking, it never cooled down. The Cougars racked up 318 total yards before halftime and extended their lead to 31-7 on a 70-yard bomb from Wilson to Milne two plays into the third quarter.

“There’s no right answer against us and that’s with any good offense,” running back Lopini Katoa said.

Troy: Defense remains a work-in-progress for the Trojans. BYU averaged 8.6 yards per play while rolling up 524 yards through the first three quarters.

BYU: A two-week layoff did not affect the Cougars’ ability to dominate another opponent. While BYU’s offense marched down the field at will, the Cougar defense locked down a Troy offense that looked so crisp against Middle Tennessee a week earlier.

BYU should have no trouble climbing a few spots in the AP Top 25 poll after another dominating victory.