Wisconsin aims for another Big Ten West title vs. Minnesota 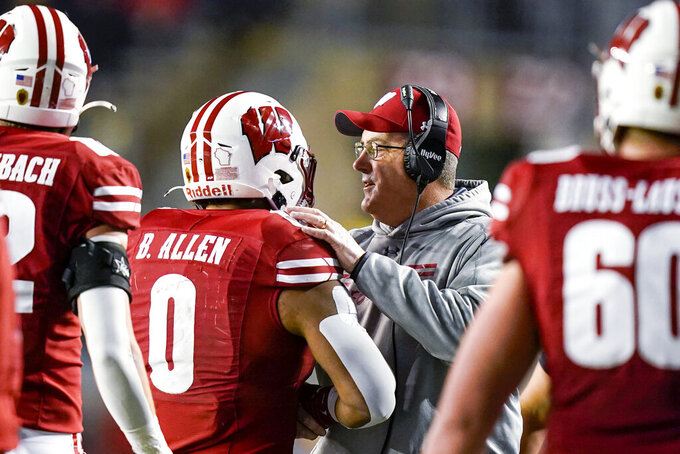 Wisconsin coach Paul Chryst congratulates running back Braelon Allen on a touchdown against Nebraska during the second half of an NCAA college football game Saturday, Nov. 20, 2021, in Madison, Wis. (AP Photo/Andy Manis)

Line: Wisconsin by 6 1/2, according to FanDuel Sportsbook.

With a win, Wisconsin will win the Big Ten West Division for the fifth time in eight years and make a seventh trip to the conference championship. The Badgers are tied with Ohio State for the most appearances in the first 10 editions of the title game. Minnesota has won only one of the last 17 matchups with Wisconsin since 2003, the last time the Gophers hoisted Paul Bunyan's Axe on their home field. They beat the Badgers on the road in 2018.

Wisconsin LBs Leo Chenal and Jack Sanborn vs. Minnesota QB Tanner Morgan. Chenal and Sanborn are the heart of a Badgers defense that ranks second in FBS with an average of 238 yards allowed per game. Morgan, whose 25 career wins as a starter are the most by a quarterback in Gophers history, according to school records, has passed for 379 yards, three touchdowns and no interceptions over the last two weeks.

Wisconsin RB Braelon Allen. The Badgers have won seven straight games, and the 17-year-old freshman has topped the 100-yard mark in each of those while taking over the lead role in the backfield following a season-ending knee injury to Chez Mellusi.

Minnesota LB Jack Gibbens. The graduate transfer from FCS-level Abilene Christian has been an instant success in his first season of Big Ten ball, leading the Gophers with 76 tackles.

Minnesota and Wisconsin will play for the 130th time, more than any other FBS rivals. This will be the 73rd time the Paul Bunyan's Axe traveling trophy will be awarded. ... The Badgers have outscored their opponents by an average margin of 22 points during their seven-game winning streak. … Wisconsin has 18 takeaways against only six turnovers over its last five games. The Badgers had three takeaways and 12 turnovers during their 1-3 start. ... Badgers QB Graham Mertz has six of his nine TD passes over the last three games with a total of 601 yards passing. ... The Gophers are 12th in the FBS in rushing defense with an average of 104 yards per game allowed. ... Morgan's career completion percentage (61.2) is the best among QBs with a qualifying amount of attempts in school history.