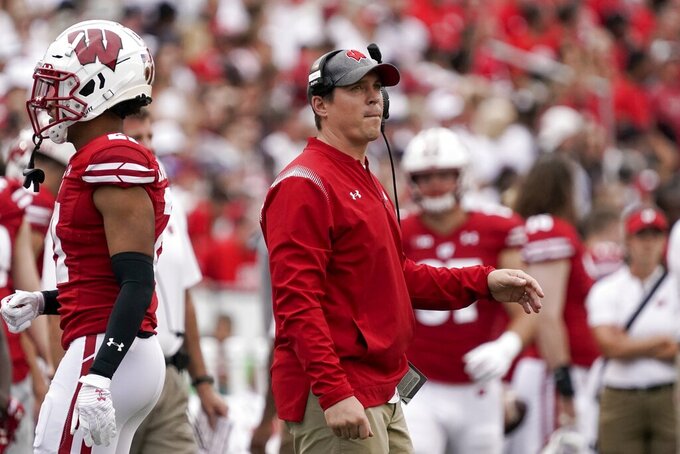 FILE - Wisconsin defensive coordinator Jim Leonhard watches during the first half of an NCAA college football game against Penn State in Madison, Wisc., Saturday, Sept. 4, 2021. Wisconsin has produced defenses that have ranked among the nation’s stingiest virtually every year since Jim Leonhard took over as coordinator in 2017. Leonhard faces perhaps his biggest challenge in maintaining that standard this year. (AP Photo/Morry Gash, File)

MADISON, Wis. (AP) — Wisconsin has boasted one of the nation's stingiest defenses virtually every season since Jim Leonhard took over as coordinator in 2017.

Leonhard faces perhaps his biggest test in maintaining that standard this year.

Wisconsin must replace eight of the top 10 tacklers from a defense that allowed the fewest yards per game (235.3), yards per play (4.10) and yards per rush (1.99) of any Football Bowl Subdivision team last season. Leonhard welcomes that challenge.

“It’s been a fun spring,” Leonhard said this week. “A lot of coaching. Guys are putting it out there. They’re playing hard. They’re playing physical. They’re not always playing smart, just like any young team. It allows you to coach.”

Yet the Badgers say they still can be as stout as usual on defense. Wisconsin is finishing spring practice Friday as it prepares for its Sept. 3 opener with Illinois State.

A former star safety at Wisconsin who played 10 seasons in the NFL, Leonhard has developed into one of college football's top assistants since joining Paul Chryst's staff. Wisconsin has ranked first in total defense (284.8), second in pass defense (181.4) and third in run defense (103.4) and scoring defense (17.3) over Leonhard's five seasons as coordinator.

“We’ve got Jim Leonhard, so my confidence is high,” safety John Torchio said. “He speaks for himself with his track record here. We have the talent. We have him. So I’m confident we’re going to be a typical Wisconsin defense.”

If Wisconsin is going to have its typically dominant defense, plenty of unproven performers will have to step up.

Herbig should be one of the Big Ten’s top defensive players this fall after collecting 14 ½ tackles for loss and a team-high nine sacks last season. Benton has started two dozen games over the last three seasons.

But they’re the exceptions.

In some respects, this compares to the situation Wisconsin faced in 2018 when its defense had to replace four draft picks from a team that went 13-1 a year earlier. That 2018 team also dealt with key injuries and ranked 29th in total defense, the only time the Badgers have finished outside the top five during Leonhard’s tenure as coordinator.

Wisconsin now has to replace even more firepower but also has the benefit of pursuing transfers who wouldn’t have to sit out a year.

The Badgers capitalized by adding three transfer cornerbacks in Justin Clark (Toledo), Cedrick Dort (Kentucky) and Jay Shaw (UCLA) to make up for the departures of Faion Hicks and Caesar Williams, who combined for 70 career starts. Those three transfers have been working alongside fifth-year senior Alexander Smith.

“That’s where the transfer portal changes things enough,” Leonhard said earlier this spring. “You don’t have to go from experienced to non-experience in today’s football. … We knew we needed depth. We didn’t have to go as young as we did in the past.”

Wisconsin hasn’t ruled out going back to the transfer portal to address the safety position, where depth is a major concern following a leg injury to Travian Blaylock this spring.

The Badgers also will miss the playmaking ability of Chenal and Sanborn at linebacker. The crowded list of candidates competing at those spots includes Jordan Turner and Tatum Grass among others.

Wisconsin will spend the rest of the offseason trying to identify the next playmakers on its roster who can continue the Badgers’ recent tradition of excellence on defense.

Leonhard looks forward to discovering which guys take that leap.