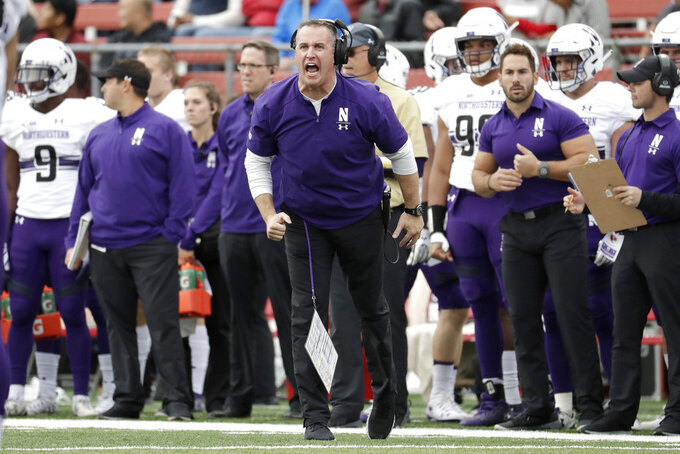 EVANSTON, Ill. (AP) — Though the playoff is out of reach, there are still some big prizes in sight for No. 20 Wisconsin.

The Badgers have a chance to grab the lead in the crowded Big Ten West and take a key step toward their third straight appearance in the conference championship game when they visit Northwestern on Saturday.

Wisconsin (5-2, 3-1 Big Ten) has won 16 straight division matchups and can add a little clarity to a muddied race with a victory this week. The Badgers are tied with Purdue and Iowa for second place, a half-game behind the Wildcats (4-3, 4-1).

They already have a victory over the Hawkeyes and would take out the Boilermakers by winning the rest of the way. That would thrust Wisconsin into the conference championship game for the sixth time in eight years, not a bad consolation for a team whose playoff hopes got dashed with a loss at Michigan two weeks ago.

Of course, the Badgers first have to beat Northwestern.

"They play a lot of teams close," linebacker Ryan Connelly said. "They were close with Michigan (a three-point loss) a couple of weeks ago. They're a good team, and they always come ready to play."

Northwestern comes in with three straight wins after losing three in a row, though the past two games were probably a little closer than the Wildcats would have liked.

They rallied late to beat then-winless Nebraska by a field goal in overtime at home and nearly got caught looking past Rutgers last week in 18-15 victory on the road. They're back at Ryan Field, staring at a game that could go a long way toward determining the division championship.

"Us and Wisconsin have been two of the top teams in the Big Ten West," defensive end Joe Gaziano said. "You don't want to say that this is the pivotal game of deciding the Big Ten West, but it's definitely a big factor in it. This is a big one for the season as a whole."

Wisconsin and Northwestern have split their past four meetings. And none of those games was decided by more than two touchdowns. The Badgers' most recent loss to a division team was when Northwestern beat them 13-7 on Nov. 21, 2015. Wisconsin has won two in a row against the Wildcats, including a 33-24 victory early last year that ultimately helped keep them out of the conference championship game.

"It just ends up being a big, physical, kind of a slugfest with Northwestern every year," guard Michael Dieter said. "It's fun."

Wisconsin's Jonathan Taylor eyes his ninth straight game dating to last season with at least 100 yards. He leads the nation in rushing at 158.4 yards per game.

Coach Pat Fitzgerald had a challenge for his inconsistent offense.

Northwestern went from racking up 487 yards against Nebraska to just 278 against Rutgers. Quarterback Clayton Thorson had a big dropoff, going 17 of 34 for 150 yards after throwing for a career-high 455 in the previous game, though he did lead the go-ahead drive.

"I asked him point blank, 'How did you think you played. Rate your game one to seven as far as the games this year — one being your best game and seven being your worst,'" Fitzgerald said. "He said seven and I would agree."

The Wildcats ran for 128 yards against Rutgers after being held to a combined 68 over the previous three games. Though Rutgers does rank last in the Big Ten against the rush, it was just the sort of game Northwestern was looking for since Jeremy Larkin had to stop playing football because of a spinal condition following the third game of the season. Freshman Isaiah Bowser ran for a career-high 108 yards and his first two touchdowns last week.