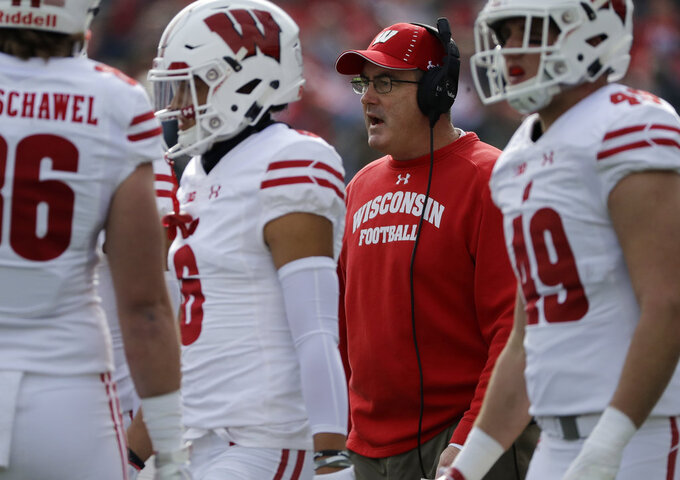 File-This Oct. 27, 2018, file photo shows Wisconsin head coach Paul Chryst talking to his team against Northwestern during the first half of an NCAA college football game in Evanston, Ill. Wisconsin and Miami followed much of the same dreary path that started in the warmth of the Orange Bowl and ends with a frigid thud at Yankee Stadium. The Badgers and Hurricanes were both AP Top 25 teams when they played last season in the Orange Bowl, a 34-24 win for No. 6 Wisconsin in a game that seemed to serve as a preview for a better 2018 ahead for both programs. (AP Photo/Nam Y. Huh, File) 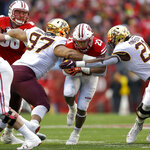 The Badgers and Hurricanes are each trying to salvage seasons that have been two of the biggest disappointments in college football this year. The game is a rematch of last season's Orange Bowl, a 34-24 victory by the Badgers. Wisconsin was ranked No. 6 in that game, Miami was No. 11 and both teams were ranked in the top 10 of this season's preseason poll. Each team fell out of the poll long ago, with the Hurricanes even losing four straight games.

Miami QB Malik Rosier vs. Wisconsin defense. This season of starting-quarterback flip-flops for Miami ends with a fifth and final one, as Rosier gets one last chance in his final college game. N'Kosi Perry had been the most recent starter and had a rocky season, plus he faced heat for two questionable Snapchat posts — one of them surfacing just a few days ago. Rosier has 1,007 yards passing and six touchdowns in six starts this year. Perry and Jarren Williams are both available to play for the Hurricanes.

Miami: Junior LB Shaq Quarterman had 76 tackles, 13 for a loss, and was picked for the All-ACC first team, while junior RB Travis Homer had 969 yards rushing, averaging 6.3 yards per carry.

Wisconsin: Sophomore RB Jonathan Taylor is the nation's leading rusher with 1,989 yards and 16 TDs. He rushed for at least 200 yards in four games and ran for 100 yards in 11 games. The Hurricanes have allowed only three running backs this season to top 100 yards. But Taylor ran for 130 yards on 26 carries against the Hurricanes in the Orange Bowl.

Wisconsin is 2-0 against Miami in the postseason. ... The Hurricanes are 19-20 in bowl games. ... The Badgers will be making their 17th straight bowl appearance and are 15-14 overall in the postseason. ... Badgers were ranked fourth by the AP in the preseason but were hurt by a head injury to QB Alex Hornibrook that limited him to nine games. ... Hurricanes were No. 8 in the preseason. Lost four straight before finishing the season with a 24-3 victory over the Atlantic Coast Conference Coastal Division champion Pittsburgh.