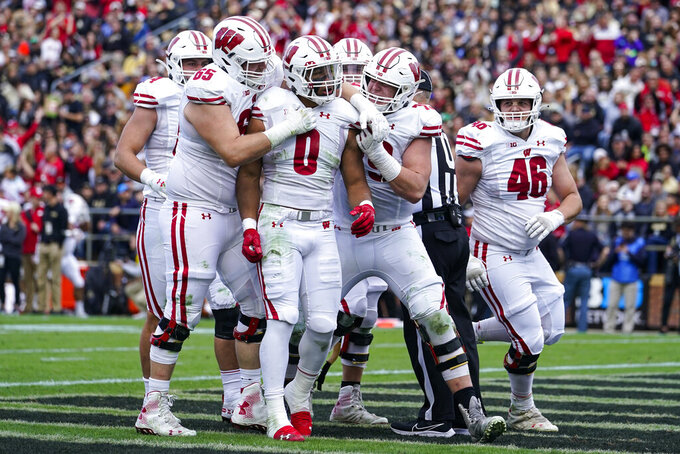 Wisconsin running back Braelon Allen (0) celebrates a touchdown with teammates during the first half of an NCAA college football game against Purdue in West Lafayette, Ind., Saturday, Oct. 23, 2021. (AP Photo/Michael Conroy)

MADISON, Wis. (AP) — Wisconsin has moved back into contention for a spot in the Big Ten championship game by regaining its identity as a team that likes to run opponents into submission.

Defense hasn’t been a problem for the Badgers this season. No. 1 Georgia is the only Football Bowl Subdivision program allowing fewer yards per game or yards per play.

But the Badgers still lost three of their first four games because its offense was producing more turnovers than touchdowns. When he was asked after a 38-17 loss to Michigan earlier this month whether the offense was struggling to find an identity, Wisconsin coach Paul Chryst acknowledged that was a fair criticism.

“Right now I don’t want us to be known as an inconsistent group, and that’s what we have been,” Chryst said at the time. “Maybe that is our identity right now, and we’ve got to change that.”

They’ve changed that in a big way and carry a three-game winning streak into Saturday’s matchup with No. 9 Iowa (6-1, 3-1 Big Ten). Both the Badgers (4-3, 2-2) and Hawkeyes enter this game in control of their destiny in the Big Ten West Division race.

While the Badgers’ defense remains as strong as ever, the offense has surged by returning to Wisconsin’s smash-mouth roots.

“We just kind of talked as a group of players and said we’re done with taking the crap and decided just to draw a line in the sand and say, ‘We’re going to be physical from here on out. We’re going to be fast and physical and tough,’" offensive tackle Tyler Beach said. “That’s just kind of been our mindset. Instead of feeling things out on the first drive, we’re trying to come out there and hit guys in the mouth on the first drive.”

Chryst’s play calling has enabled his players to take that approach.

Wisconsin has run 78.7% of the time during this winning streak and has compiled 381 yards and 24.7 points per game.

The change was most evident Saturday as the Badgers won 30-13 at Purdue, ranked 25th at the time. Chez Mellusi and Braelon Allen each rushed for at least 140 yards as Wisconsin attempted just eight passes.

Wisconsin now is putting games away down the stretch rather than crumbling. After getting outscored 79-27 in the fourth quarter of their first six games, the Badgers outscored Purdue 10-0 in the final period.

“I think we’re starting to wear down some defenses in the second half,” Mellusi said. “I think the first couple of games, we didn’t finish the way we should have. Now we’re finishing games.”

“I didn’t think Purdue was very interested in tackling in the first quarter,” Allen said. “When the fourth quarter came around, it was really apparent. Definitely, it takes the will out of a defense, I think, kind of constantly running through their face over and over and over. By the end of the game, they just don't really want to do anything anymore.”

Allen, a 17-year-old freshman, has rushed for over 100 yards in each of Wisconsin’s last three games after totaling just 12 carries in the Badgers’ first four contests. Mellusi ranks fourth in the Big Ten in yards rushing (692) and second in carries (139).

Wisconsin’s focus on the run has addressed this offense’s biggest weakness by helping the Badgers take better care of the ball.

Although Marshall is the only FBS team averaging more turnovers per game than Wisconsin, the Badgers have improved in that area lately. After committing 12 turnovers in their first four games, they’ve had just five during this winning streak.

By controlling the clock, making fewer mistakes and running over opponents, the Badgers finally are resembling a typical Wisconsin offense.

“Now it’s time to keep that consistency that we have and keep establishing that same identity, because it can be stripped away from you,” Beach said. “In order to be a successful team, you’ve got to keep that identity.”