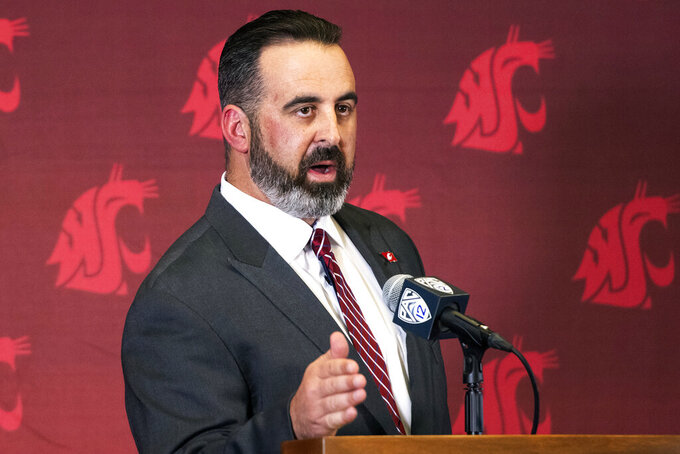 FILE - In this Thursday, Jan. 16, 2020, file photo, new Washington State head football coach Nick Rolovich speaks during an NCAA college football news conference after being officially introduced in Pullman, Wash. Normally, in March, college football teams would be preparing for the upcoming season. Because of the new coronavirus pandemic, coaches are trying to figure out how to recreate some of what has been lost. Rolovich said the Cougars will continue to learn their new offensive and defensive systems...online. (Pete Caster/Lewiston Tribune via AP, File)/

Since taking over as Florida State coach in December, Mike Norvell has spent seemingly endless hours laying the foundation of his program.

Winter is time for coaches to deliver a consistent message, build the culture they want and get players to buy into a way of going about their business whether they are in the weight room, a meeting room or classroom.

Norvell has seen plenty of positive signs. Spring practice is the first opportunity to see how it translates to the field. The Seminoles got in three practices before the coronavirus outbreak shut down college sports and upended nearly everything else.

“You spend so much time teaching them why we do things. And you're hopeful to get the chance to show them some of the payoff of that through spring practice,” Norvell said.

Normally, college football teams all over the country would be preparing for the upcoming season. Installing new schemes. Working on fundamentals. Developing less experienced players and expanding the skills of veterans. Building a cohesive team, players and coaches connecting.

That's gone now and coaches are trying to figure out how to recreate some of what has been lost.

“Your football team is under construction,” Notre Dame coach Brian Kelly said. “A new group of players that require time. Those hours mean a lot. You begin to develop the DNA of your football team.”

Kelly is in year 11 with the school and the Fighting Irish are coming off a third consecutive season of double-digit victories. He replaced offensive coordinator Chip Long after last season, but did so promoting quarterbacks coach Tommy Rees. The Irish also have a fifth-year senior quarterback in Ian Book heading into his third season as the starter.

“We're all academic advisers," Kelly said of his staff.

“You can really hone in on the techniques, fundamentals (during spring practice),” Diaz said. “That's the time the players are introduced to the new scheme and then they get a chance in the summer to grasp it on their own before we get back together again for training camp in August.”

Spring practice across major college football is typically done by the end of April. The Atlantic Coast Conference has canceled all athletic-related activities through the academic year; the other Power Five conferences have suspended spring athletics, including practices, though various dates.

“I’m not going to be overly optimistic about the return to practice." Southeastern Conference Commissioner Greg Sankey said. "We haven’t fully closed that opportunity but I think practically that window is pretty narrow.”

Coaches are hopeful some of the time they have lost in the spring might be given back in the summer, either through minicamps or earlier starts to preseason practices. But there is so much uncertainty the old coaching cliche of taking things one day at a time has never been more relevant.

Luke Fickell is entering his fourth season at Cincinnati with an established core of experienced players. He said his goal is to give the players a routine. The American Athletic Conference has suspended practices, but left the door open for other organized team activities — even if they can't be done in person.

The Bearcats will be getting workout regimens they can do on their own without access to local gyms. Fickell plans to organize online meetings with position groups and assistant coaches.

Indiana strength and conditioning coach Aaron Wellman said he is trying to individualize workouts to match what players have available.

“We've provided the workouts through an app on their iPhones so that they can download their workouts, we can track their progress,” Wellman said.

Fickell said he is not overly concerned about his veteran players. Sometimes keeping those guys engaged and motivated in spring practice is a challenge. For younger players, especially at a developmental program like Cincinnati, losing spring practice is a huge setback.

“They’re going to lose half a year of development,” he said.

Illinois center Doug Kramer, a senior, said nothing compares to the amount of repetitions a player gets in spring ball "to work on specific skills that you can bring to the team sets."

“Also, you're going to miss out on those team reps, which are big just to get the timing of the offense and the repetition of the defense,” he said.

Fickell said he can only imagine how hard it would be for a rookie head coach to have spring football canceled and his team scattered to the wind.

Not only is Jeff Hafley new to Boston College, but he's a first-time head coach at any level. The Eagles got in five spring practices.

Norvell said he planned to send his players a five-minute video of himself, twice a week. Having them hear his voice and see his face is more about building trust than teaching football.

“There's a lot of uncertainty with everyone,” Norvell said. “Just to continue to re-emphasize our commitment to their development in any way possible and just let them know that we're here for them.”