Wolverines may need to win with defense again 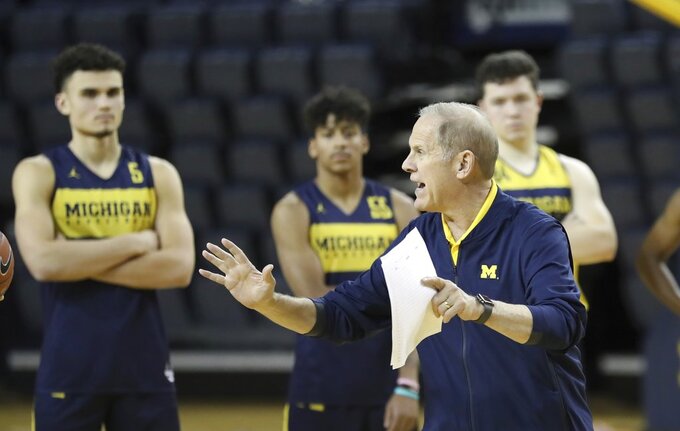 ANN ARBOR, Mich. (AP) — By the time last season ended, Michigan had long shed its reputation as a finesse team. The Wolverines reached the Final Four by playing hard-nosed defense and outlasting opponents even when shots weren't falling.

The team was comfortable winning ugly — and Michigan may need to call on that resolve again in the season to come.

After falling one victory short of a national title, the Wolverines return for the 2018-19 season with plenty of key players back — but they did lose three of their top four scorers. Moe Wagner, the star big man who left early for the NBA, was the most significant departure, and Duncan Robinson and Muhammad-Ali Abdur-Rahkman were seniors.

If Michigan is going to make another deep run in the NCAA Tournament, the defensive end may again be the key.

"The expectations for a team that lost so many good players is probably way too high, and we're not going to worry about them anyhow," coach John Beilein said. "I can't let our guys worry about any hype, if we're a nationally ranked team, or where they come out in the early stock. We've just got to try and get better."

The Wolverines are 19th in the AP's preseason poll , which isn't excessively high. Michigan peaked toward the end of the season in both 2017 and 2018, so some patience with Beilein's group is appropriate.

Although the Wolverines lost Wagner, they still have point guard Zavier Simpson, whose defensive tenacity set the tone for a lot of Michigan's success last season. Charles Matthews is also back after averaging 13 points in 2017-18. Sophomore Jordan Poole will try to build on his buzzer-beating shot against Houston back in March, which kept Michigan's NCAA run going.

Not only were Wagner, Abdur-Rahkman and Robinson among Michigan's top scorers, they were also the team's top three 3-point shooters among players with a significant number of attempts. Matthews and Simpson haven't been great in that department, so it may fall to Poole and Isaiah Livers to shoot more from the perimeter.

Jon Teske showed some positive flashes last season as a 7-foot-1 backup to Wagner. He averaged 12.3 minutes a game and 3.4 points, but the Wolverines would obviously love for him to become a more consistent threat offensively.

"I know the starting position is open and between myself, Austin (Davis) and Colin (Castleton), we just need to continue to work together," Teske said. "Every day we are battling and that is making us better and the team better."

Guard David DeJulius and forwards Ignas Brazdeikis and Brandon Johns join the Wolverines as part of a well-regarded class of freshmen. The Lithuania-born Brazdeikis turns 20 in January. He arrives at Michigan from Orangeville Prep in Canada.

"Iggy's been such a pleasure to coach. The kid wants to be such a good player," Beilein said. "And for a player that's so highly rated, a player that is so college-ready to play, he's a sponge."

Beilein had a double-bypass heart operation this offseason but recovered well . He said he's delegated individual drills to assistants, and when assistants have handled that he's run on a treadmill.

"I feel great, but I've been pretty vigilant," he said. "I've got good energy."

Michigan opens the season Nov. 6 against Norfolk State and plays at Villanova on Nov. 14 in a rematch of the national title game. The Wolverines host North Carolina on Nov. 28.