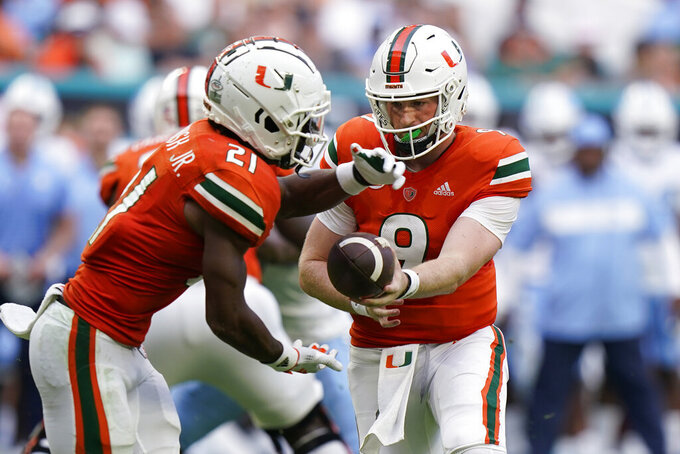 Line: Miami by 7, according to FanDuel Sportsbook.

Both teams come in on three-game slides. The Hurricanes already lost to Coastal Division-leading North Carolina and can ill afford a second loss. Virginia Tech is trying to avoid what would be its third four-game losing streak in the last five seasons. The Hurricanes haven’t dropped four in a row since 2018.

Miami's running game vs. Virginia Tech’s defensive line. The Hurricanes couldn’t run the ball against North Carolina and fumbled on one of the rare instances where they had some success on the ground. Virginia Tech allowed Pitt's Israel Abanikanda to run for 320 yards and six touchdowns last weekend.

Virginia Tech: WR Kaleb Smith. He leads the Hokies with 25 catches for 402 yards and two TDs. He had nine grabs for 152 yards at Pitt before leaving with an injury. He's practicing and expected to play this week.

This is only the second time a Hokies-Hurricanes game will happen with both teams entering on a winless streak of at least three games. Miami snapped a four-game slide in 2018 with a 38-14 victory. ... The Hurricanes haven’t led at any point in their last three contests. That’s the longest single-season stretch without a lead by Miami since it went 180 minutes without a lead to close the 2007 season. If Miami doesn’t hold a lead Saturday, it’ll be the longest such drought for the Hurricanes since 1970. ... The Hokies had lost their two previous games (West Virginia, North Carolina) by a combined 74-20 before getting some offense moving at Pitt. ... Virginia Tech's only victory in the last five meetings came by a 43-35 score at Miami in 2017.