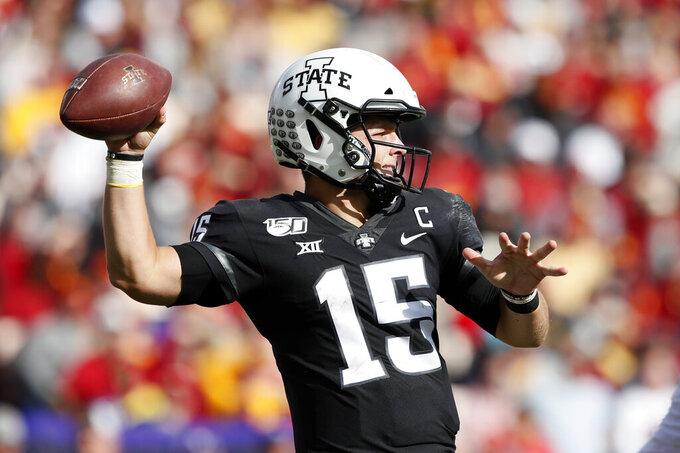 MORGANTOWN, W.Va. (AP) — Iowa State's smothering defense from a year ago is still hauntingly fresh in the memories of West Virginia players. So, too, is Cyclones quarterback Brock Purdy bouncing through the Mountaineers with relative ease.

The Cyclones have allowed the second-fewest touchdowns in the Big 12 and opponents have been limited to 114 rushing yards per game and three total rushing TDs.

West Virginia managed just 52 rushing yards and 152 total yards while allowing Purdy to have his way in the 30-14 loss to the Cyclones.

"One thing is for sure, if you're not ready to play this game, especially after what happened last year, I don't think you're going to be ready to play any game," West Virginia defensive lineman Reese Donahue said. "For me, it's a little bit of a personal agenda just because of the way things turned out last year.

"This game means a whole lot and I know everybody that was here last year, it means a lot as well."

Purdy, a sophomore, has established himself as one of the Big 12's top quarterbacks. He leads the league with 316 passing yards per game. He threw for two TDs and ran for two more scores in a 49-24 win over TCU last Saturday.

Iowa State coach Matt Campbell said he's built the offense around Purdy's skills to "help him kind of take ownership in what we're trying to do."

Some other things to know as the Cyclones and Mountaineers meet:

Both teams have struggled to run the ball at times this season. Still, Iowa State has managed to surpass 400 yards of offense in its first five games for the first time in school history.

The Cyclones, who twice were held under 100 yards on the ground in September, leaned on Purdy more against TCU and he ran 12 times for 102 yards.

West Virginia ranks last in the league with a rushing average of 3.4 yards per play and 105 yards per game. No individual rusher has gone over 100 yards in a game.

West Virginia's brutal October schedule doesn't get much easier after a 42-31 home loss to Texas. The Mountaineers also travel to No. 6 Oklahoma next week and play No. 22 Baylor on the road on Halloween night.

The Mountaineers play more road league games than at home in odd-numbered years. In 2015, West Virginia went 0-4 in October, losing to four ranked league opponents, three of them on the road.

Iowa State all-Big 12 safety Greg Eisworth is probable this week after leaving the TCU game with an undisclosed injury. The junior is the Cyclones' leading tackler. He had eight tackles, including a sack, against West Virginia last year.

West Virginia receiver Sean Ryan will miss several games after undergoing surgery for an upper body injury, while leading receiver Sam James is questionable. Both were injured after making catches against Texas and combined for 11 receptions against the Longhorns.

In addition, Cyclones cornerbacks coach Matt Caponi was the defensive backs coach at West Virginia from 2016-18.

Iowa State's last three losses have been by a combined five points. Over the past two years the Cyclones' worst loss has been 14 points.