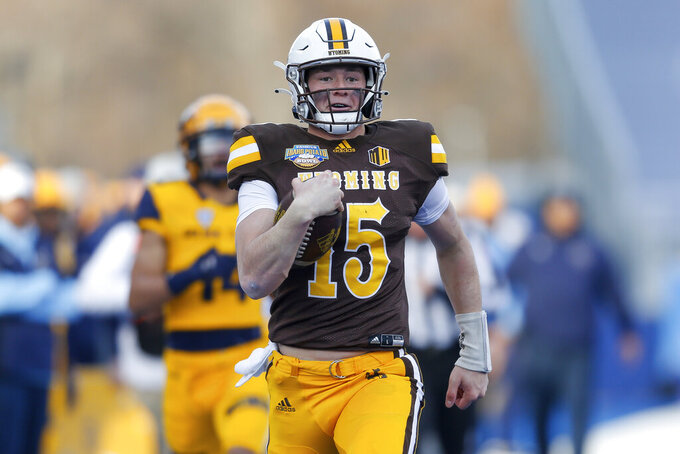 The way he danced past Kent State defenders for 200 yards rushing and four touchdowns in a record-setting performance in the Cowboys' 52-38 win on Tuesday, it was a fitting tribute. Especially since she taught him how to dance.

“When she was living in a nursing home that’s how we spent time together,” Williams said of his grandmother, who lived with his family while he was growing up. “She was slow, so we did some slower dances, and the box step was probably my favorite.”

After she watched him play his redshirt freshman season at Wyoming, she wasn’t able to attend any games this year. And while preparing for the bowl, Williams felt fortunate he had a chance to say goodbye to her over the phone.

“She never missed any of my games,” Williams said. “And I’m sure she was looking down from heaven watching this one, too.”

Aside from Williams’ yardage record, the MVP's touchdowns rushing also tied a Potato Bowl record. Through the air, he passed for 127 yards and another touchdown.

“He’s very gifted and can run like the wind,” Wyoming coach Craig Bohl said. “And obviously, it’s great to see him make those plays he’s very capable of making.”

Kent State (7-7), playing in its fifth bowl game in school history, raced out to a 17-7 lead and held a 24-21 advantage at halftime, but the Golden Flashes couldn’t hold up against Wyoming’s relentless rushing attack.

“That’s not the outcome we were looking for,” Kent State coach Sean Lewis said. “Areas that hampered us all year long hurt us today. … But I’m eager and excited to get back to work and build a program that Kent State can be proud of.”

Wyoming (7-6) scored 21 consecutive points to start the second half, including scoring runs of 27 and 80 yards by Williams, to build a 42-24 lead that proved to be too much for Kent State to overcome.

Wyoming senior linebacker Chad Muma and Butkus Award finalist didn’t disappoint in his final college game, leading the Cowboys on defense with 13 tackles and a half sack.

Wyoming: The Cowboys’ quarterback position has been a tug-of-war between Sean Chambers and Williams over the past two seasons. But Williams, who was named the starter midway through the season, will have a stranglehold on the position heading into spring practice.

Kent State: The Golden Flashes didn’t have any trouble moving the football, racking up 656 yards of offense. However, after holding Wyoming to 216 yards of offense in the first half, Kent State’s defense wilted in the second half, getting pushed around by a much more physical Wyoming offensive line.

Wyoming’s blueprint to victory this season relied on stout defense and ball control offense — except against MAC teams. The Cowboys averaged 18.3 points per game against teams from all other conferences. But in three games against MAC teams — Northern Illinois, Ball State, and Kent State — Wyoming averaged 49 points.

Kent State: Fourth-year coach Lewis returns most of the offensive pieces next season needed to accomplish something the Golden Flashes haven’t done since the 1950s—go four straight years without a losing season. Leading rusher Marquez Cooper and top receiver Dante Cephas, who combined for 2,294 yards of total offense this year, will return for their junior seasons. Collin Schllee is expected to take over at quarterback after senior Dustin Crum exhausted all of his eligibility. Defense presents a bigger challenge for Lewis, who returns just four players but includes leading tackler Dean Clark.

Wyoming: As Bohl enters his ninth season at Wyoming, he will have to cobble together almost an entirely new offensive line with only one starter returning. But his defensive unit returns eight starters, yet will have a huge hole to fill with Muma’s departure.

Wyoming opens next season at Illinois on Aug. 27.

Kent State opens its 2022 campaign at Washington on Sept. 3.