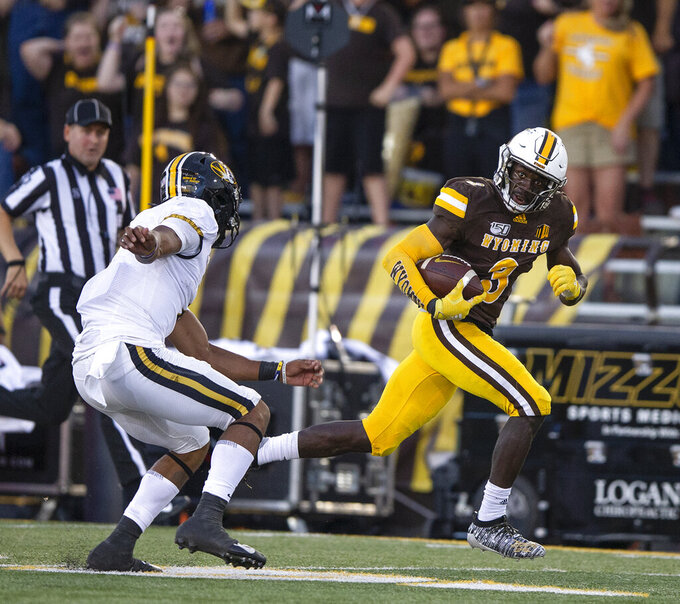 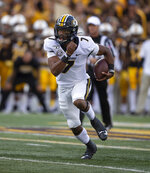 LARAMIE, Wyo. (AP) — Boise State has long carried the banner for the Mountain West Conference in head-to-head battles against the mighty Power Five teams. On Saturday night, fellow Mountain West member Wyoming made a statement of its own, upsetting Missouri of the Southeastern Conference 37-31.

Quarterback Sean Chambers rushed for 120 yards and a touchdown, Xazavian Valladay had 118 yards rushing and a score to lead Wyoming (1-0).

Chambers averaged 10 yards on each of his 12 rushing attempts. He also completed 6 of 16 passes for 92 yards for a Wyoming team that took advantage of three Missouri turnovers while giving up 537 yards to the Tigers.

"Anytime I see space, I just think to myself, I'm better than them," Chambers said. "No disrespect to those guys, but that's just my mentality. I gotta think it's gotta take more than one guy to bring me down."

Valladay averaged 7.9 yards on 15 carries as Wyoming ground out 297 yards on 42 carries as a team.

Missouri was led by Clemson transfer quarterback Kelly Bryant, who completed 31 of 48 passes for 423 yards and two touchdowns. However, Bryant threw a costly interception in the end zone and lost a fumble that was returned by Wyoming for another score. Missouri lost another fumble at Wyoming's 1-yard line.

"We were driving the ball down the field," Bryant said. "We just couldn't punch it in. We just kept shooting ourselves in the foot."

Missouri entered the game favored by more than two touchdowns. The game began that way with the Tigers scoring on their first two possessions — a 3-yard TD pass from Bryant to Jonathan Nance and a 2-yard scoring run by Larry Rountree III — and dominating the Cowboys in total offensive yardage, 144-28 in the first quarter.

But Wyoming reversed its fortunes in the second quarter, outscoring the Tigers 27-3 in a scoring spree that included a 30-yard fumble return by cornerback C.J. Coldon, a 61-yard scoring run by Valladay and a 75-yard TD run by Chambers. The runs by Chambers and Valladay were the longest of their young college careers.

The Cowboys extended their lead to 34-17 entering the fourth quarter on a 1-yard run by Trey Smith.

Missouri had 32 more offensive plays than Wyoming, but the Cowboys had no turnovers in the game.

Missouri: A major setback for the Tigers who were on the cusp of the Associated Press Top 25 poll entering the game.

"The challenge of looking in the mirror and realizing the reality of what took place, making corrections, quit talking about it and it starts with me," Missouri coach Barry Odom said.

Wyoming: A signature win under sixth year coach Craig Bohl and a major statement for the Mountain West Conference on the whole.

"We beat an SEC team, I think a good SEC team, and we didn't play our best football," Bohl said.

Missouri's visit to Laramie was only the second time in history that Wyoming hosted an SEC opponent. In 2004, Wyoming hosted Ole Miss and defeated the Rebels 37-32. The Cowboys played at Missouri last year and lost 40-13. Overall, Wyoming has a 4-10 record against SEC teams.

The Tigers have started the season on the road only 27 times in their history. The trip to Laramie was only the fifth overall for Missouri since 1980. The Tigers are 6-18-1 (26 games) in those road games.

Missouri heads home for a nonconference showdown with West Virginia on Saturday.

Wyoming hits the road for a game next Saturday at Texas State.