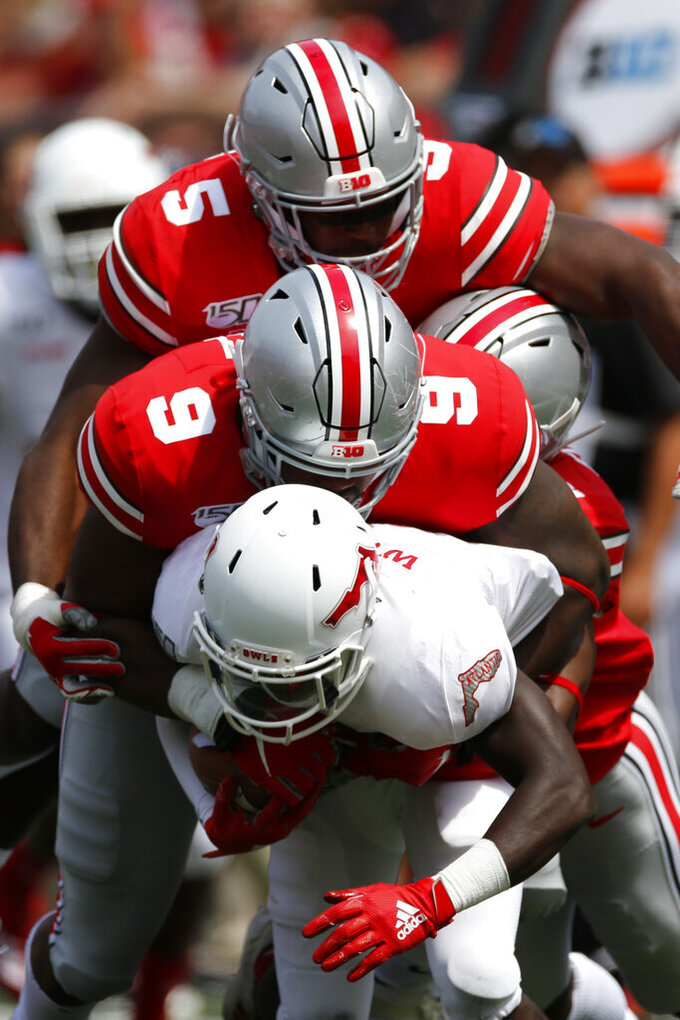 To fix a defense that statistically was the worst in Ohio State history, new coach Ryan Day went to the wedding planners' playbook: something old, something new, something borrowed, something blue.

There are much tougher tests to come for the fifth-ranked Buckeyes. But against Florida Atlantic, the defense co-coordinated by 40-year-old Jeff Hafley, lured from the NFL, and 69-year-old Greg Mattison, hired away from rival Michigan, played far more soundly than it did most of last year.

The players haven't changed much. The scheme has, but that's not what the Buckeyes' new brain trust believes will bring back a defense worthy of the Silver Bullets nickname.

FAU had 65 yards rushing on 29 attempts, not counting four sacks for minus-43, and did not reach the end zone until the fourth quarter when the Buckeyes were working in reserves.

There was no doubt changes were coming to the defensive staff at Ohio State after the Buckeyes ranked 72nd in the country in yards allowed per play (5.77) and were among the worst in the nation at giving up long runs in 2018. Co-coordinators Greg Schiano and Alex Grinch both moved on and Day went about building his first staff after taking over for Urban Meyer.

They knew each other from a year working together for the San Francisco 49ers, where Hafley coached defensive backs from 2016-18. Day wanted a co-coordinator setup, matching Hafley with someone with Big Ten experience and more knowledge of college running games. Hafley had not coached at the college level since 2011 at Rutgers under Schiano. He also spent five seasons at Pittsburgh, where he coached former All-Pro Darrelle Revis.

"He was a great recruiter and then I also worked with him at the 49ers and saw what a great teacher he'd become," Day said before the season opener. "Really connects with the players, but also understands what's going on. Has a great feel for secondary play. So the combination of youth and experience, but then also the front end matched up with the back end, I thought that was a really good mix."

Mattison has been coaching defensive linemen and linebackers since the late 1970s, mostly in college. He was co-defensive coordinator for Meyer's first national championship team at Florida in 2006 and did a three-year stint with the Baltimore Ravens, working with stars such as Ray Lewis and Terrell Suggs. He had been at Ohio State's archrival, Michigan, since 2011.

Switching from maize and blue to scarlet and gray might seem scandalous, but Mattison wanted to be a coordinator again and didn't mind sharing.

"My ego isn't there. I enjoy being in a lot of the phases of coordinating and I enjoy co-coordinating with a guy who is like what you want to coach with. (Hafley) has no ego. All he cares about is winning," Mattison said eight days before the opener.

As Mattison chatted with a visitor in his office, there was a knock at the door. It was Hafley, color-coded chart in hand, with questions about which linebackers would be used in certain spots for certain formations. It was a brief and seemingly productive chat.

"I think we're very similar," Hafley said the next day. "I think we're both pretty laid-back off the field. We both kind of have the same sense of humor. He'll say some stuff sometimes that I'll kind of smirk and be like, I was thinking the same thing. So we both keep it light in that regard. And then when we get on the field, we both coach really hard. You know I don't feel like when we're together there's this huge age gap."

Hafley works the beard-stubble look that seems so popular among the fast-rising young football coaches these days and already is re-affirming his reputation as an ace recruiter. Still, he needed to re-adjust to coaching college players.

Hafley said Mattison and the rest of the staff, which includes veteran defensive line coach Larry Johnson and two more new guys, Al Washington and Matt Barnes, have had to occasionally remind him that what works in the NFL could confuse college kids. And delivering a message to a player on scholarship is different than one on salary.

The relationship between old head/young buck makes for a compelling back story at Ohio State this season, but whether Hafley and Mattison become buddies is beside the point.

"Win, play good defense and then nothing else matters," Hafley said. "If we don't win and we don't play really good defense, then it's our fault, right?"