Young, McFadden, White head to Hall of Fame without Heismans 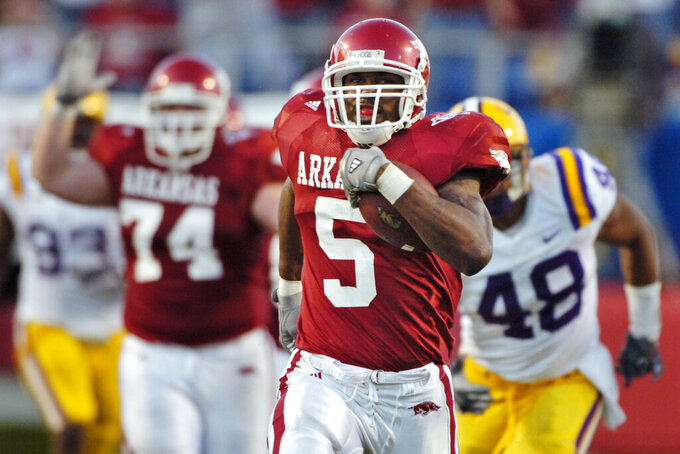 FILE - In this Nov. 24, 2006, file photo, Arkansas tailback Darren McFadden (5) runs against LSU in an NCAA college football game in Little Rock, Ark. Newly elected College Football Hall of Famers Darren McFadden, Vince Young and Lorenzo White never won the Heisman Trophy. Each was up for the award at a time when their credentials didn't quite fit the voting trends. (AP Photo/David Quinn, File)

NEW YORK (AP) — Vince Young put up dizzying dual-threat numbers at Texas before it was common in college football.

Arkansas' Darren McFadden was one of the first great running backs to get swept aside as college football became dominated by the wave of dual-threat quarterbacks who followed Young.

Lorenzo White was a standout at Michigan State in the days when running backs were college football's biggest stars, but his best season came as a sophomore back when Heisman Trophy winners were always upperclassmen.

Young, McFadden and White were among 13 players and two coaches being inducted into College Football Hall of Fame on Tuesday night at the National Football Foundation's awards dinner in New York.

There are no Heisman winners in the class and the campaigns of Young, McFadden and White might have done better at different times.

Young wasn't the first star quarterback who could tear apart a defense with his legs and his arm, but he set new standards at Texas. In 2005, with the college football world transfixed on USC taking a run at three straight national titles with running back Reggie Bush and quarterback Matt Leinart, Young was being promoted by Texas as both Trojans stars rolled into one.

Young passed for 3,036 yards and 26 touchdowns that season and ran for 1,050 and 12 scores, topped off by 450 total yards and three scores in a memorable Rose Bowl performance that took down USC and made the Longhorns national champions. Young was the first player in NCAA history to rush for more than 1,000 yards and pass for more than 2,500 in a single season.

Since then, 20 quarterbacks have done it, including last year's Heisman winner, Kyler Murray, who along with Clemson's Deshaun Waston are the only players with 4,000 yards passing and 1,000 yards rushing in a season. Imagine what Young could have done in today's offenses?

“Everybody says you came (up) too early,” Young said Tuesday.

Young finished second to Bush in the Heisman voting and then used it as motivation to go out and win the national title.

McFadden was Heisman runner-up twice, losing out twice to quarterbacks who could do it all. Troy Smith of Ohio State was a landslide winner in 2006, though he didn't run as much that season as he did as a junior. McFadden was relegated to second in 2007 by Florida's Tim Tebow, who was the first player to throw 20 touchdown passes and run for 20 TDs in a season.

McFadden ran for more than 1,600 yards in each of those seasons, and in ’07 was his own version of a dual-threat. Running out of Arkansas' wildcat formation, McFadden threw four touchdown passes in 11 attempts.

Sixteen of the last 19 Heisman winners have been quarterbacks, and now it's becoming difficult for running backs to even get enough support among voters to be a finalist. This year the finalists are three quarterbacks and Ohio State defensive end Chase Young.

Over the last four seasons just one running back as been invited to New York for the presentation ceremony.

White played at the end of an era when running backs owned the Heisman. From 1973-85, running backs won all but one Heisman. White ran for 2,066 yards, tops in the nation, and 17 touchdowns in 1985, but finished fourth behind winner Bo Jackson of Auburn and quarterbacks Chuck Long of Iowa and Robbie Bosco of BYU.

White was only a sophomore and figured he just had to wait his turn. The Heisman was mostly for seniors and occasionally juniors then. Tebow was the first sophomore to win it. An injury slowed White in his junior year when he was a leading Heisman contender and as a senior he ran for 1,572 yards and finished fourth in Heisman voting again.

“I should have won it twice,” White said, and added with a big laugh: “I led the nation, Bo Jackson got the trophy. Whenever I see him I always say, ‘Please, let me touch our trophy.'”