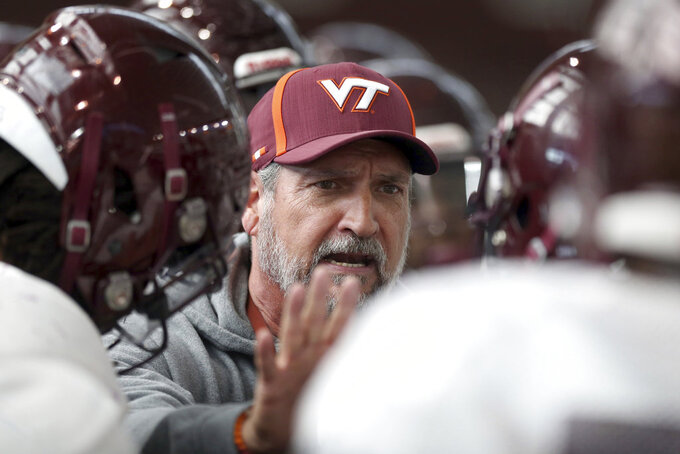 When the Virginia Tech offense gave up a touchdown against Notre Dame, Hokies defensive coordinator Bud Foster said his defense reacted as though they had come up short.

Late in the first half of Virginia Tech's 45-23 loss to No. 5 Notre Dame , Hokies quarterback Ryan Willis' fumble was scooped up by the Irish's Julian Love and returned for a touchdown.

Foster said when the defense came off the field after the extra point, "it was like they gave up the touchdown."

It was another teaching moment for one of the youngest defenses Foster has ever had to start a season.

"I pulled them together and said, 'We're playing our tails off right now. Keep your head up. We've got a lot of football left,'" Foster said. "That's where we've got to have some maturity. Go to the next play."

Foster's group has at times shown no signs of the inexperience expected with nine new starters. At other times, the defense has looked like a group getting intensive on-the-job training for the Hokies (3-2, 2-0 Atlantic Coast Conference).

They hope they can regroup on Saturday when they play at North Carolina (1-3, 1-1).

In its season-opener, Virginia Tech held Florida State without a touchdown at home for the first time in a decade in a 24-3 victory , but two weeks later, the Hokies were torched for 495 passing yards by a backup quarterback in a 49-35 loss at previously winless Old Dominion .

Notre Dame's point total was the highest for an opponent at Lane Stadium since Houston beat Virginia Tech 49-12 in 1974.

"There are momentum swings," Foster said. "How we handle those swings is where we have to be better."

The Hokies' youth is partly their own doing. After three starters graduated last season and three others left early for the NFL draft, coach Justin Fuente dismissed three more from the team for various infractions.

Free safety Divine Deablo also missed the game against Notre Dame with a hamstring injury, forcing Tyree Rodgers into more extensive action than he'd seen before. Rodgers was badly beaten on what would have been a 62-yard touchdown pass in the first half, but quarterback Ian Book just as badly overthrew Chris Finke on the play.

On what proved to be the most decisive play of the game, three defenders converged on Book as he scrambled toward the line of scrimmage, leaving Miles Boykin open behind them for an easy flip and a 40-yard scoring play.

"Those things are pretty frustrating from our part, but that's also what we're dealing with — young guys," Foster, in his 38th season, said. "You rep those things in practice and you should be able to do it in a game."

There were other frustrations from the defensive side, including the offense's failure to punch the ball in on three tries from the 1 yard-line after Reggie Floyd's interception, and two missed field goals.

The mistakes weren't major, Floyd said, but became glaring because the Irish pulled away after halftime.

"The small things, us paying attention to our own assignments, and it kind of got out of hand in the second half," Floyd, one of the last returning starters, said. "We just shot ourselves in the foot."