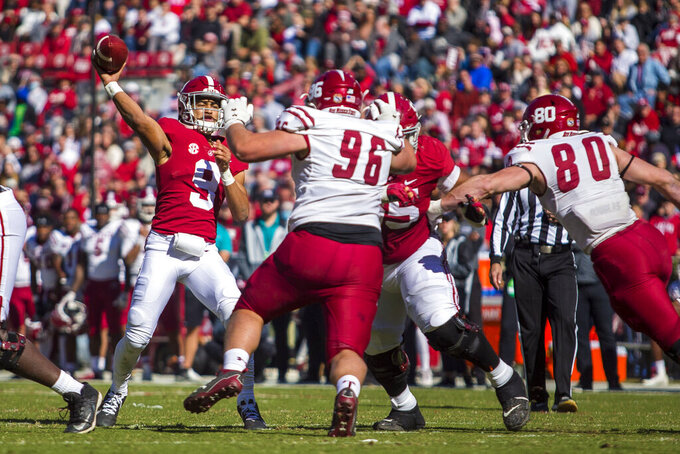 Alabama quarterback Bryce Young (9) throws under pressure against New Mexico State during the first half of an NCAA college football game, Saturday, Nov. 13, 2021, in Tuscaloosa, Ala. (AP Photo/Vasha Hunt) 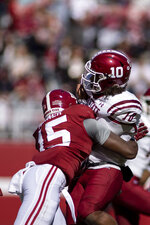 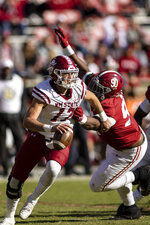 TUSCALOOSA, Ala. (AP) — For 44 seconds, No. 3 Alabama actually was trailing New Mexico State.

It didn’t take long for Bryce Young, Jameson Williams and the Crimson Tide to change that situation dramatically.

Down 3-0 late in the first quarter, Young threw a 50-yard touchdown pass to a wide-open Williams and Alabama went on to romp 59-3.

“I really challenged the team this week,” Alabama coach Nick Saban said. "I told them it was kind of Judgment Day for us. We've been a little inconsistent.

“We don't look at the scoreboard. It shouldn't affect how we play. An opponent is faceless. It's all about how we play,” he said.

Young passed for 270 yards and five touchdowns, including three to Williams, and completed 21 of 23 passes in just over a half for the Tide (9-1, No. 2 CFP). Alabama rattled off seven touchdowns in 20 minutes for a 49-3 halftime lead over the Aggies (1-9).

Young became the first Alabama quarterback to complete his first 13 passes in a game, playing only one drive into the second half when he lost a fumble in New Mexico State territory.

The Aggies just couldn't keep up with the speedy Williams, who caught six passes for 158 yards. He had touchdowns of 50, 32 and 7 yards and had a fourth called back because he stepped out of bounds.

Brian Robinson Jr. ran for 99 yards and two touchdowns — including a 63-yarder — all in the first half.

Jonah Johnson completed 19 of 30 passes for 129 yards for New Mexico State, which was outgained 587-138. Will Anderson Jr. had two of the Tide's seven sacks.

“Offensively we really played hard,” New Mexico State coach Doug Martin said. “We were just really overmatched up front. But as far as the attitude and effort that our players had out there on both sides of the ball, it was really what you’re looking for."

The Tide responded quickly and emphatically after that early Aggies field goal. The defense pitched a shutout on the final 10 drives.

“When we got back to the sideline everybody just honed in and calmed down," Alabama safety Malachie Moore said.

New Mexico State: Actually took the lead almost 10 minutes in on Ethan Albertson’s career-long 50-yard field goal. There weren't a bunch of highlights after that.

Alabama: Dominated when it got going and gave some backups, like quarterback Paul Tyson, significant playing time. Tyson, the great-grandson of former Alabama coach Paul “Bear” Bryant, saw probably the most action of his career and completed 6 of 8 passes for 43 yards..

Alabama had several players have to be helped off the field with injuries: punt returner/wide receiver JoJo Earle, backup tailback Roydell Williams and safety DeMarcco Hellams.

“We lost Roydell, probably for a good while,” Saban said. “And JoJo probably not quite as serious but probably going to be out for a while.”

Tailback Jace McClellan was already out for the season and five-star freshman signee Camarr Wheaton hasn't played with a knee injury, leaving two scholarship tailbacks. Saban said Hellams came into the game with a thigh bruise and got hit in that spot again, but could have returned.

Saban pointed to other highly ranked teams losing, plus Florida's scare against FCS Samford when asked about his team's apparent slow start.

“You want me to be critical of my team because we had to punt once in the first quarter and they got a field goal?" Saban said. "I mean, I’m not going to do it.

“I’m not going to be critical of anything that our players did when we win 59-3.”

New Mexico State stays in SEC country with a visit to Kentucky.