4 Alabama players announce they are declaring for NFL draft 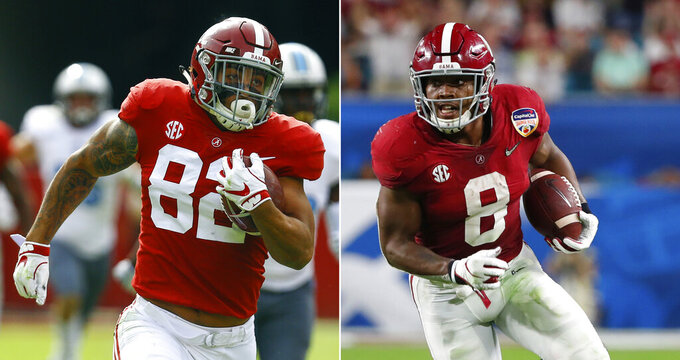 FILE - At left, in a Nov. 17, 2018, file photo, Alabama tight end Irv Smith Jr. (82) carries the ball in for a touchdown against Citadel during the second half of an NCAA college football game, in Tuscaloosa, Ala. At right, in a Dec. 29, 2018, file photo, Alabama running back Josh Jacobs (8) runs the ball, during the first half of the Orange Bowl NCAA college football game against Oklahoma, in Miami Gardens, Fla. Four Alabama players are skipping their final seasons to enter the NFL draft, including Smith Jr. and Jacobs. (AP Photo/File)

Those projected first-rounders announced their intentions on Friday, along with versatile tailback Josh Jacobs and tight end Irv Smith Jr.

Jonah Williams and Quinnen Williams are unanimous All-Americans rated as potential Top 10 picks. They helped lead the Crimson Tide to a Southeastern Conference title before losing 44-16 to Clemson in the national championship game.

The exodus of underclassmen has become an annual rite for the talent-rich Tide.

"This is probably going to sound like a Grammy acceptance speech but I just have a lot of thank yous because this place really, it's an incredible program that coach (Nick) Saban's built but it runs because of all the people that work in the coaching and support staff roles," said Jonah Williams, before naming staffers in a number of different departments.

Jonah Williams won the Southeastern Conference's Jacobs Blocking Trophy. He started every game of his Tide career, the first at right tackle and the past two on the left side.

"These guys have always been exemplary in all the things they've done to help themselves, in terms of their work ethic, their character, the choices and decisions they've made, which is what has created the opportunity for them," Saban said.

Alabama has other standout players who haven't announced their plans yet. That group includes safety Deionte Thompson, a projected first-round pick, and linebacker Mack Wilson.

Smith wasn't present at the announcement because he's attending the wedding of fellow tight end Hale Hentges this weekend.

Quinnen Williams is a third-year sophomore who won the Outland Trophy as the nation's top interior lineman on either side of the ball. The 6-foot-4, 295-pounder had a breakout season in his first season as starter, leading the team with 17 tackles for loss and ranking third with 66 tackles.

"I dreamed of this day almost every day when I was a little kid when I was playing little league football in Birmingham," he said. "Just to see I made it become a reality, like I get a chance to enter the draft. Most people don't get a chance from where I'm from.

"Most people have the athletic ability or the ability to do it, but can't get past different distractions and stuff. To see I defeated all the odds and the negativity and just everything in general, I defeated it all. It made me emotional kind of to see that I've came from a long way, seen a lot of stuff when I was young."

Quinnen Williams said he spent considerable time talking on the phone about the decision to Saban, who he called "like the Godfather of early leaving."

Jacobs and Smith are also listed as potential late first-rounders in at least one mock draft.

Jacobs was a diverse threat for the Tide on offense and special teams. He ran for 640 yards and a team-high 11 touchdowns while catching 20 passes for 247 yards and three scores. Once a lightly recruited player who was a late addition to his Alabama recruiting class, he averaged 30.6 yards on 14 kick returns with a TD.

"This decision has definitely been tough for me," he said. "Even on the ride here, I still didn't know exactly what choice I wanted to make."

Smith emerged as a weapon this season. He caught 44 passes for 710 yards and seven touchdowns.

His father, Irv Smith Sr., is a former NFL tight end who was a first-round pick by the New Orleans Saints in 1993.