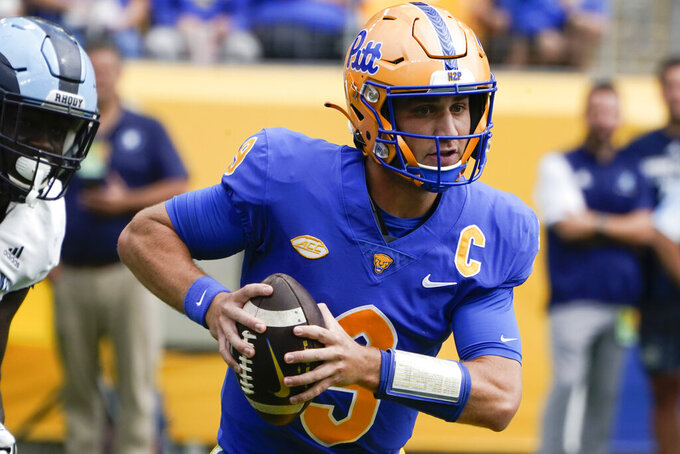 Pittsburgh quarterback Kedon Slovis (9) scrambles as he is pressured by Rhode Island defensive lineman Matt Thomas (55) during the first half of an NCAA college football game, Saturday, Sept. 24, 2022, in Pittsburgh. (AP Photo/Keith Srakocic)

PITTSBURGH (AP) — Tailback Israel Abanikanda rushed for four touchdowns and quarterback Kedon Slovis was solid in his return from injury as No. 24 Pittsburgh beat Rhode Island 45-24 on Saturday.

The Panthers (3-1) have been searching for a top-tier running game since Qadree Ollison and Darrin Hall both rushed for more than 1,000 yards in 2018. Pitt relied on Kenny Pickett and the passing game since, including the program’s first ACC championship last season. But with Pickett in the NFL and Slovis sidelined last week, the Panthers have leaned on the ground game and Abanikanda has emerged in a big way.

“I’m not surprised because I know what I’m capable of,” Abanikanda said. “I’m going to keep working to try and do even better.”

The Panthers rushed for 272 yards and scored at least 30 points for the ninth time in 11 games, and Slovis had plenty of help on the ground from Abanikanda, who had 19 carries for 177 yards. The four touchdowns tied for second-most in program history. It marked the first time a Pitt running back rushed for that many TDs in a game since Hall against North Carolina in November 2017.

“(Abanikanda) is a great player and a great back,” Slovis said. “You saw it today. He had four touchdowns. That’s a testament to him and the offensive line.”

Slovis started after missing last week’s win at Western Michigan with an undisclosed injury. He was an efficient 20 of 27 for 189 yards. A USC transfer, he hadn’t played since the first half of an overtime loss against Tennessee two weeks ago.

“He was efficient with the football and took what they were giving us,” Pitt coach Pat Narduzzi said. “He didn’t make bad decisions throwing the ball into coverage. I thought he was good.”

Marquis DeShields scored a pair of touchdowns for Rhode Island (2-2), Narduzzi’s alma mater. The Rams, playing their first-ever game against a ranked FBS opponent, trailed by 10 points at halftime before Pitt pulled away after the break.

The Panthers took a 7-0 lead the first time they touched the ball on M.J. Devonshire’s 82-yard punt return for a touchdown.

On Pitt’s second possession, Abanikanda ran untouched up the middle for a 67-yard touchdown. It was his second rushing touchdown of 60 yards or more this season.

DeShields answered less than a minute later for Rhode Island with a 63-yard touchdown.

Abanikanda scored his second touchdown on Pitt’s next possession on a 12-yard run to make it 21-7.

Pitt added a 31-yard field goal and DeShields scored his second touchdown in the final minute of the first half.

Abanikanda scored again on Pitt’s opening drive of the second half on a 24-yard run.

Narduzzi earned his 56th career coaching victory at Pitt, tying him for third all-time with John Michelosen, who coached the Panthers from 1955-65. Narduzzi trails only Jock Sutherland and Glenn “Pop” Warner for the most wins by a Pitt head coach.

Narduzzi, a 1990 graduate of Rhode Island, played for the Rams from 1987-1989 as a three-year starting linebacker. He also coached linebackers at Rhode Island from 1993-1997 before he was promoted to defensive coordinator for two seasons.

Abanikanda rushed for 100 or more yards for the third straight time this season. He’s the first Pitt player with three straight 100-yard rushing games since Hall in 2017.

Abanikanda entered the game as the ACC’s leading rusher and has 75 carries for 464 yards in the past three weeks. He was briefly injured on a kickoff return late in the first half.

Devonshire scored his second touchdown of the season. He also had the game-clinching interception return for a score in the season-opener against West Virginia. He’s the first Pitt player to return an interception and punt for a touchdown in a season since Darrelle Revis in 2006. Revis and Devonshire both attended the same high school outside Pittsburgh.

Rhode Island: A pair of big plays helped Rhode Island score twice in the first half. The Rams are ranked and they’re one of the better FCS teams, but they couldn’t keep up with the Panthers, who improved to 20-1 against FCS opponents.

Pitt: Rhode Island served as one final tune-up before Pitt begins defense of its ACC title next week against Georgia Tech. Abanikanda and the Panthers controlled the game on the ground and Slovis was effective through the air with short swing passes on multiple long drives.

Pitt: The Panthers picked up a comfortable victory against an FCS squad before ACC play begins next week and should stay ranked.