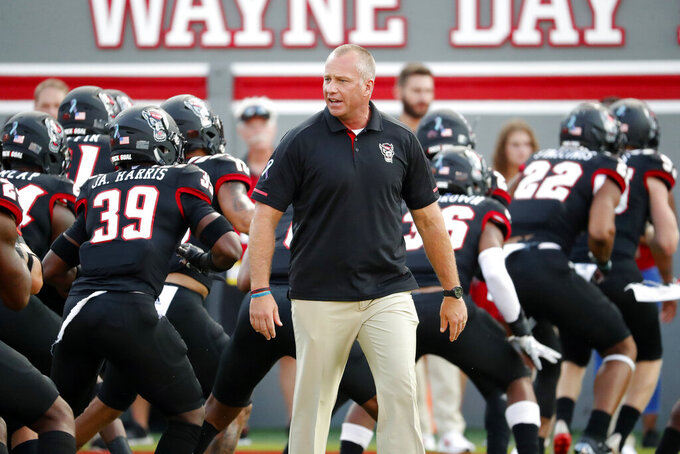 FILE - North Carolina State head coach Dave Doeren watches his team warm up prior to the start of an NCAA college football game against Ball State in Raleigh, N.C., Saturday, Sept. 21, 2019. Doeren said the team had three positive coronavirus tests over 2½ months before students returned. Clusters followed and the school soon paused all athletics activities, including football practices for about a week before postponing this weekend's game at Virginia Tech to Sept. 26. (AP Photo/Karl B DeBlaker, File)

“As far as parking spots,” the Tigers' tight end quipped, “there are plenty available.”

Welcome to some Atlantic Coast Conference schools' version of campus bubbles — fewer people, reduced interactions — in an attempt to minimize outbreaks while resuming classes and launching a football season that looked in doubt much of the summer. It is the college approach to models used by the NBA and NHL in their successful returns to playing.

The reality is colleges face very different challenges with students, student-athletes, instructors and employees coming and going from campuses daily.

As Tara Kirk Sell, senior scholar at the Johns Hopkins Center for Health Security put it: “Would you call a fishing net a bubble? No.”

“I agree that the strategy probably does make it so sports can happen or that college football is more likely to happen,” said Sell, also an assistant professor at the university’s school of public health. “It’s still going to be tough.”

With ACC football teams set to begin play this week, some league schools have tried to reduce campus population density through remote instruction to minimize interactions in classrooms and elsewhere.

Rivals North Carolina and North Carolina State called off in-person undergraduate classes for the semester and cleared most students from on-campus housing after numerous clusters. Their daily positive-case counts have dropped significantly since.

“I think it was outside the classroom where students had gotten in trouble,” Tar Heels coach Mack Brown said. “Because I talked to our players, they were anxious about going to class. When they got to class, they said the classes were safe. So I don’t think whether there’s a bunch of students here or not, whether we’re in the classroom or not matters as long as we’re doing what we’re supposed to do.

“And we basically just told the players: ‘If you want to play, then go by the guidelines.’”

But he sees a bigger-picture flaw in campus strategies: “I think banking your whole plan on 19-year-old kids being totally reliable is a little dicey.”

“It just seems to me that you’re telling young kids that part of the reason you’re bringing them back is because you want them to have the college experience,” said Cohen, also a professor at UC Davis’ medical school. “And then you really don’t want them to have the college experience, because that requires socializing and other things that may potentially put them at risk.”

To Cohen's point, it's unclear which people interacting on campuses stay home, attend big parties or cram into packed bars when they leave.

“The people in the NHL or NBA bubbles, they’re still just having contact with everyone who’s passed all the hoops and hurdles to be in the bubble,” said Sell, a former Stanford swimmer and silver medalist in the 2004 Athens Olympics. “The NBA’s fairly confident that everyone who’s in the bubble has contact only with people who have been approved, whereas this isn’t happening on college campuses. They’re not restricting their movement, they’re not restricting who they see.”

N.C. State is an example of how quickly things can turn.

Coach Dave Doeren said the team had three positive tests over 2½ months before students returned. Clusters followed and the school soon paused all athletics activities, including football practices for about a week before postponing this weekend's game at Virginia Tech to Sept. 26.

N.C. State spokesman Brad Bohlander said there were 6,273 students in university housing as of Aug. 26 when the school instructed them to begin moving out unless they received an exception. That number was down to 2,847 by Friday and is expected to slide to roughly 1,600 students receiving approval to remain, though most Wolfpack athletes live off-campus.

“I hope that we can return to where we were,” Doeren said. “We were doing really well. And so as we get on the back side of this thing and students are leaving our campus, you would hope that it protects the so-called bubble that we’re trying to have with our guys.”

That explains why Pittsburgh coach Pat Narduzzi said half-jokingly last month said he’d love to bring in mattresses for players to the Panthers' indoor practice facility, lock the doors and “bunk right there.”

Short of that, Pittsburgh senior defensive lineman Rashad Weaver will just stay home as much as possible.

“It is what it is,” Weaver said on the risks. “You learn to live with it.”

AP Sports Writers Will Graves in Pittsburgh; Pete Iacobelli in Columbia, South Carolina; and Hank Kurz in Richmond, Virginia; contributed to this report.