ACC: No. 5 Clemson out to vanquish another challenger 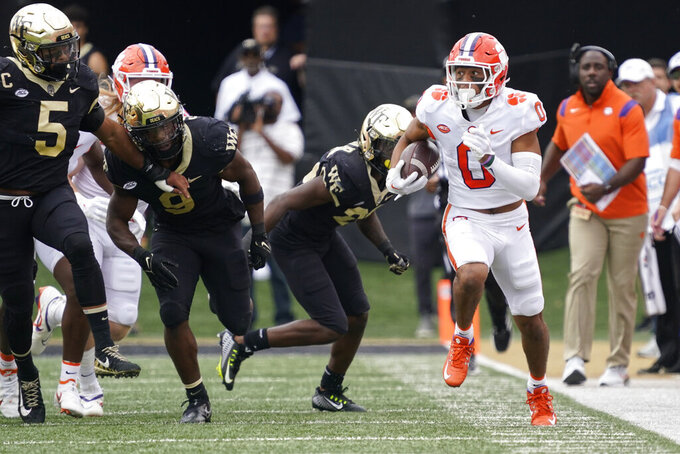 Here are things to watch in the Atlantic Coast Conference in Week 5:

The Tigers will be facing a top challenger for the Atlantic Division title for the second straight week after winning 51-45 in double overtime at No. 22 Wake Forest last Saturday. Another win seemingly puts Clemson in the driver's seat.

N.C. State won 27-21 in two overtimes last year and has won two of the five meetings with the Tigers when both programs were in the AP Top 25.

No. 22 Wake Forest (3-1, 0-1) at No. 23 Florida State (4-0, 2-0). The Demon Deacons' chance at repeating as Atlantic Division champs took a hit in the loss to Clemson, but they also showed they they remain a formidable opponent.

The Seminoles are 4-0 for the first time since 2015 and one of two ACC programs, along with Syracuse, to already have three wins against Power Five opponents, although rebuilding LSU, Louisville and Boston College don't quite have the chops of Wake Forest, especially with Sam Hartman back at QB. The Demon Deacons have won the last two meetings.

Georgia Tech (1-3, 0-1) was on pace for a fourth consecutive three-win season under Geoff Collins and decided this week to go in a new direction. The school not only fired Collins, but also dumped athletic director Todd Stansbury.

Assistant head coach Brent Key will lead the Yellow Jackets on an interim basis, starting with a visit to No. 24 Pittsburgh on Saturday night. When the teams met a season ago, the Kenny Pickett-led Panthers romped, 52-21.

The Yellow Jackets have lost nine straight games to Bowl Subdivision opponents, the last five by a combined 210-20 with three shutouts. ... Wake Forest has been ranked in the AP Top 25 for a school-record 17 consecutive polls. ... Syracuse is seeking its first 5-0 start since 1987 when it hosts Wagner on Saturday. That 1987 team went 11-0-1 under Dick MacPherson.

Redshirt junior QB Sam Hartman of Wake Forest now ranks as the active career leader among FBS quarterbacks with 85 touchdown passes after tying an ACC record with six in the double overtime loss to Clemson.